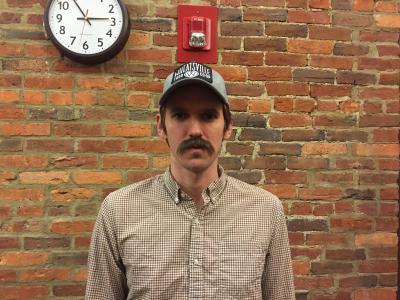 I flushed that flock of doves three times.
An hour’s worth of wingbeats in a rush
and then a rush and then a rush.—From “Walking on a Path by Fisher Creek, I Flushed a Flock of Doves,” Volume 60, Issue 3 (Fall 2019)

Tell us about one of the first pieces you wrote.
The first thing I wrote that I think still holds up, I wrote when I was about fifteen. I had a Livejournal, which was an early blogging platform. And some of the stuff on there I still find very funny. There were some poems, but mostly just silly riffs. Like here's one I went back and found:

There are three towels in my room.

A word to any who might try to quash the Christmas Spirit by forcing me to return them to their home in the east, i.e. the bathroom:

The Christmas Spirit has a long reach.

Okay, maybe it's not so funny. But it's not me trying to sound like somebody else. And that was a good start.

What writer(s) or works have influenced the way you write now?
I like plain poets! Maybe the poet I've read and thought about most in the last couple of years is Jane Kenyon. She's so good, and so simple. She's writing description that's so direct it sounds like aphorism.

I know it's boring and obvious, but I really like Shakespeare. Is it less boring if I say I don't love the sonnets? I'm a play guy. But yeah, Shakespeare. Even though most of the poems I write (and read) are free verse, I think about meter a lot. For the poem in this issue, I had the scansion of the last line in my head before I had the words. I spent a long time walking around with the rhythm in my head before I found the words to fit it.

What other professions have you worked in?
Since finishing grad school, I've been a plumber's helper, working in residential new construction. Before that, I worked as a teacher, a carpenter's helper, a DV advocate, a journalist, a lab assistant, and a shoeshine boy.

What did you want to be when you were young?
A professional wrestler? I was a dumb kid. But for the last ten years, I have wanted to be a plumber. So, I'm living my dream!

What inspired you to write this piece?
About seven years ago, a buddy of mine jumped in front of a truck. Shortly after that, another buddy started talking in a serious and sustained way about killing himself. We had a bunch of conversations about it. And afterward, I realized that my memories of these two friends were eliding: I was remembering all these conversations with my dead friend, when actually I'd had them with a guy who was still living, but suicidal. So, I let those elided memories spin out into a series of poems, trying to trust what my mind was trying to do. These poems let me talk to a man I really loved who'd died suddenly and who I never got to talk to about death. They also let me write what I had been too scared to even imagine, that this other friend might die too. This is one of the poems from this series.

Is there a city or place, real or imagined, that influences your writing?
This poem is set in a valley outside of Austin, split by a creek and full of scrub juniper forest. I was born there, in a little house my dad built. My parents still live out there. It is my favorite place in the world.

Is there any specific music that aids you through the writing or editing process?
Nope! Writing is a very sound-oriented process for me, so I do it in quiet. The one exception is that I've always enjoyed editing poems on job sites, in my head. A job site is almost always noisy, but there's something about that level of impersonal noise that lets me zone out and work through the problems in a poem.

Do you have any rituals or traditions that you do in order to write?
I engage in a practice of involuntary gratitude when I manage to get anything written.  But no. Does anybody have a ritual that works? Open to feedback!

If you could work in another art form what would it be?
Dancer! Wow I would love to be a dancer. For me, poetry never feels particularly true, even when I'm sharing very vulnerable biographical information. But dancing seems very true! Maybe actual dancers would disagree with me, but I wish that I could practice a more diaphanous art form. Hips don't lie.

What are you reading right now?
I'm trying to make Alice Munro's stories last me as long as possible. And I just started reading Mary Szybist, who I am just loving. Plus, I just read this pop romance novel my sister asked me to return to the public library for her. I can really see why people read those things. It was so dumb and fun! So maybe more of those.

JESSE BERTRON is a plumber’s helper living in Austin, TX. He has an MFA from Vanderbilt University and serves as co-director of poetry at Round Top, an annual poetry festival in Central Texas. His work has been published or is forthcoming in Rattle and Ruminate, among others.