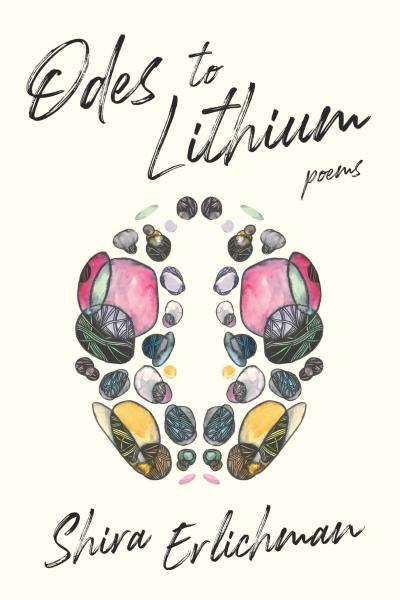 There’s something apt about the fact that Shira Erlichman’s Odes to Lithium arrived in the world in 2019. That’s because this year is the 25th anniversary of Elizabeth Wurtzel’s landmark book, Prozac Nation, while Kay Redfield Jamison and Annie G. Rogers, psychologists who both blurb Erlichman’s collection, published their books documenting personal experiences of mental illness a year later in 1995. Now, a quarter of a century on, Erlichman’s odes bring a new kind of wonder to our conversations about mental illness, a tenderness not just towards the self, but towards the medication that makes the self’s continued existence possible. As Erlichman writes of lithium in “Lightweight,”

. . .you shovel salt through my blood
like a dedicated father clearing the driveway

except the driveway is the whole world

Lithium clears the greatest difficulties, the ones that live inside the writer’s mind, and it offers reassurance—“somebody cares for me” reads the poem’s last line. Refusing the pharmacist’s whisper, “The lithium,” as well as her own initial desire to reject and gloss over the medication that keeps her tethered to this earth, Erlichman’s Odes to Lithium insists on saying the name. Her words aren’t just about conquering the stigma of lithium and of bipolar disorder, but of returning the care that lithium offers her, naming it anew the way one does a lover. “My baby.” “My little impossible guru.” “Unpatented Freak” gives way to “my monk.” All of it is true and all of it disrupts what we think we know about mental illness, even those of us who share the label.

To say that Erlichman’s ways of referring to lithium are disruptive is, perhaps, to overlook the many other ways this collection and individual poems interrupt established traditions. Defined by the ode, the collection also takes on the ghazal in a piece titled “Ghazal, Interrupted,” a poem that plays with the concept of interruption on both a structural and dialectical level. The poem troubles the ghazal form while highlighting the mental and physical disruptions of living with mental illness—the attempts to explain, the music over the tears, the impossibility of bridging the divide.

In a similar way, “Thirteen Ways of Looking at Phineas Gage,” takes on Wallace Stevens’ terse classic, a poem that has been reimagined and riffed on in countless ways, and lets it explore the space where fantasy meets history, where delusion meets the kinship of neurological oddity. Unlike Stevens’ brief, moody lines, Erlichman lets her long lines spill across the page, stanzas turned to tiny paragraphs examining a life lived alongside Gage. If, for Stevens, “A man and woman/Are one./A man and a woman and a blackbird/Are one,” then for Erlichman a man and the rod that blew through his skull are one, as is the man, the rod, and the story passed down. A woman and her pill are one. And perhaps, most of all, the furthest poles of existence blend together. Learning about Phineas Gage, “The class chatters: was he never the same? A brute? Or was he, as some wrote, a miracle? No one says “both.” How often we forget to live in the both—a luxury or an error—both?—that Erlichman is not permitted.

While lithium is widely known as a treatment for bipolar disorder, one thing that many people don’t know about it is that it is, if not carefully monitored, also a poison of sorts. You can suffer acute lithium toxicity, caused by too large of a dose, but for those who take it as medication for bipolar disorder, the risk is that of chronic lithium toxicity, in which too much of the drug builds up in the body, a situation that can lead to brain damage and even death if not caught in time, and several of the poems in Odes to Lithium describe this concern. Like Phineas Gage, lithium can be a brute and a miracle at once, and it must be monitored to ensure the brute doesn’t come to the fore. Erlichman frames it as

…a monthly ritual
to allow a stranger
to collect what is inside me
for assessment:
a shadow of poison,
or clear skies?

This monthly ritual is, at its simplest, an extension of the daily one: taking the salty, metallic pills of lithium, though it is an intimacy intruded on by a stranger. In the closeness that Erlichman cultivates with lithium in these poems, though, we are all intruders, as were the medications that came before it. In “There Were Others,” she writes of the medications that she took before lithium, speaking of them as one would of past lovers to a current partner—

…I know you want to know:
Were they better Did I love them Would I ever go back Who was she.

But if you could see what they gave me: years.
From the bottom of the lake they scraped my literacy for breathing.
Or: my mother & I, side by side on a king-size bed, reading
while they ambled & flit through my thick helplessness.

I read books. I cooked meals. Forgive me.

Yes, there were others before lithium, but, Erlichman tells the drug, they brought me to you. They carried me this far. This is something that many people with mental illness don’t feel permitted to say; every time these poems speak of the power of medication to keep us alive when our brains say we should die, they speak back to the stigma and anxiety, to the friend in “Pink Noise” who says, “over her third cup of coffee & only minutes after her birth control story/a friend tells me, ‘No offense but personally I could never take drugs.’” It responds loudly to the whispering pharmacist who speaks “lithium” like a curse.

Odes to Lithium ushers the reader into the warm space cultivated between the author and her medication, one Erlichman has cultivated over years, working up from a poem called “Pill” in which she first tried to grapple with her feelings toward this medication. It isn’t always easy or pretty, marked by scenes from the psychiatric ward, callous doctors, and struggles with family, but even where these poems challenge the reader and reveal the pain behind them, they are also sweet and laudatory. Recalling the properties of lithium outside the body, Erlichman notes that,

I know, right now, in a distant laboratory you
are being mixed with aluminum, copper,
manganese, cadmium to make
planes strong yet featherweight
they need you
because you are famous
for being the lightest
of your cousins

It’s because of yo

something heavy should fly

Imagine—without lithium, these poems wouldn’t exist, Shira Erlichman’s voice would not fly off the page in the same way, fear courting love with the aftertaste of metal. It’s reason enough for us to write our own odes to lithium.

ALLISON BIRD TREACY is a poet and essayist based in the Pioneer Valley. Her work has appeared in Cider Press Review, the Pittsburgh Poetry Review, and VIDA: Women in Literary Arts.