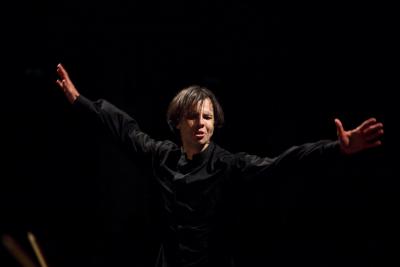 Some works in the history of music have received directly opposing assessments. Throughout his life, Giuseppe Verdi wrote operas. And then, suddenly, at the same time as Aida, he composed his Messa da Requiem. At first, in 1868, he created only one part—the last section (Libera Me). This was to be his contribution to a collective composition, a ­­Requiem in memory of Rossini. It was never performed, however. And when in 1873 Alessandro Manzoni, the author of I Promessi Sposi (a novel that Verdi read when he was only sixteen!) died, the next day the composer decided to create a grand memorial—a requiem—to “our Saint.” Verdi idolized Manzoni and called him a Great Poet, a Great Citizen, and the Glory of Italy.

From the very beginning, most critics saw a significant divergence between the religious text and Verdi’s music. The Requiem was dubbed “an opera in ecclesiastical attire.” The music of the Requiem shares a lot in common with Aida: the romantic expression has a pronouncedly colorful and vivid depiction, and we remember that Verdi himself called his project grand. As if a Catholic holiday procession is marching before us, mixing the religious and the secular.

Most conductors have interpreted Verdi’s Requiem as a large-scale musical drama in which the choir and each of the soloists have their own strictly defined roles. In contrast, Arturo Toscanini in 1938 and Carlo Maria Giulini in 1964 knew how to saturate this music with strong religious feeling and potently expressed the search for absolution and salvation.

Teodor Currentzis conducted the opera Aida in 2004, in the Novosibirsk Opera. At that time, he was already deeply submerged in the musical fabric of the composition. He recognized the great interest Verdi showed in the 1870s to old Italian music, all the way back to the polyphony of the sixteenth century. At the same time, he discovered the composer’s powerful movement toward the solutions of the twentieth century—sometimes Puccini could already be felt in Verdi’s musical gesture. While the production of Aida directed by Dmitri Tcherniakov manifested a poignant modernity, under the hands of Currentzis, Verdi’s music became searching and inquiring. In the storyline of the main female character, the most important aspect for the conductor was the spiritual, metaphysical one. As a side note, Currentzis’s debut in opera was also Aida, at the Helikon Opera in 1998. And I remember when I heard the very first bars, with the pianissimo of the violins, they made me think that a new Toscanini had appeared before me.

The Requiem, just like Aida, begins with a silence that is slowly broken. Currentzis insists that he is an authentic performer; that he never “makes music” on an assembly line, as do most professional musicians, but instead chooses music as the instrument for expressing his relationship with the world, with himself, and with humanity as a whole. Music itself is his life, the realm of his existence—that is where all of his explosive energy goes. The members of his orchestra, MusicAeterna, are the conductor’s kin: they give all of their skills, all of their inspiration, and all of their energy to expressing their relationship to the world through music. You need only see how the orchestra members play Mahler’s First Symphony standing up: it is as if a powerful current of existential music runs through their bodies! And the MusicAeterna choir, directed by the sophisticated and passionate Vitaly Polonsky, seems to begin Verdi’s Requiem without any visible effort; from the silence that contains space for endless meditation, the fragile outlines of human feelings emerge and slowly materialize. Later they turn into the densely populated frescos, into terrifying or utopian scenes.

The words—“Requiem aeternam dona eis”—resound as if the voices of the choir have merged into a single stream; there is no sensation of individual human will. It is essential, here, for Currentzis to demonstrate the supernatural, otherworldly, and metaphysical aspect given to this outcry. He is a deeply religious person, and faith always has an important place in his interpretations. An example is his perspective on Tchaikovsky’s opera Iolanta (Teatro Real, Madrid, 2012). He collaborated on Iolanta with American director Peter Sellars. Currentzis and Sellars have much in common, but most important is their similarly detached, metaphysical view of musical theater. In his direction, Sellars makes clear the sexual aspect when Iolanta and Vaudemont sing their duet. However, Currentzis emphasizes the sacred: the ecstatic movement of the singers’ souls signifies true sublimation. Currentzis’s conducting seamlessly melds with the abstract structures of George Tsypin’s stage installations, which also reach for a metaphysical dimension (Iolanta, Idomeneo, Salzburg, 2019).

The first words, “Requiem aeternam,” sound softly, quietly, as if they come from heaven (Polonsky and Currentzis helped the choir find a gripping, ecstatic sound for this). And then it changes; Verdi has humankind tackle the task: not celestial forces, it is we humans who cry for hope now, “Et lux perpetua luceat eis,” in a major mode. Strikingly, Currentzis makes it seem as if it is not a choir singing. We are no longer in a church, with a united sound and mood. Instead, Currentzis’s chorus is composed of individuals—each voice is heard. We are in a marketplace or at a public assembly, and the voices are differentiated and multilingual. Again, he offers a mix of the sacred and profane.

“Kyrie eleison” and “Christe eleison” are sung by four soloists. The tenor begins heroically, almost arduously; a focused, thoughtful bass joins him; the soprano then sends a lyrical cry up to the heavens, and the mezzo-soprano picks up the plea and brings it to a climax. We see that Verdi is much more focused on the nature of singing voices than were Bach or Mozart. In Bach’s Mass in B Minor, all texts are interpreted primarily in their religious, theological sense; there the voices practically play the role of instruments (take, for example, the soprano and tenor duet, “Domine Deus,” where one of the voices is supposed to be God the Father, and the other, Christ the Son). Mozart wrote quite a few operas in his short life, some of them emblematic of opera as a whole. Yet his Requiem and masses never originate from the opera. The sacral meaning of the words plays the most important role, as is the case when the upper C is reached in the soprano aria “Et incarnatus est” in the Mass in C Minor, which is determined by its theological content.

In the Requiem, Verdi has even the very first soloist phrases emerge from his opera canons. The tenor’s invocation makes us remember both Manrico from Il Trovatore and Radames from Aida with their belligerent, heroic passions. The exalted pensiveness of the bass is reminiscent of Zaccaria from Nabucco, the Father Superior from La Forza del Destino, and Ramfis from Aida. The passion and sincerity of the soprano immediately reminds us of Leonora from La Forza del Destino, Leonora from Il Trovatore, and Gilda from Rigoletto. And the mezzo-soprano, engaging in an intensive dialogue with the soprano, demonstrates her ties to Preziosilla from La Forza del Destino, Amneris from Aida, and Princess Eboli from Don Carlo. Verdi has his soloists act as the living, expressly tangible protagonists of a human performance, from the very beginning.

Currentzis listens closely to Verdi; he has conducted his operas on numerous occasions (Aida, Falstaff, Macbeth, La Traviata, and Don Carlo), and he gives the singers an opportunity to demonstrate their operatic qualities. At the same time, he keeps them in check. In the Novosibirsk production of Aida, he exhibited the sacral nature of music, not only in the second scene in the temple, but also in the scene in the square and in the finale. And here, also, the conductor keeps the singers from excessively gaudy, superficial intonation and asks them to fill their singing with echoes of spirituality.

Of course, Currentzis presents part of the “Dies irae” sequence not as an accumulation of horrors and penances in the style of Don Carlo, but as a true sacral fresco. By weaving the powerful choral parts with the touching soloist quartets into an organic whole, the conductor never loses sight of the sacral content. He would not be true to himself if he engaged in too much operatic trickery. And in the last part, where the plea for salvation—“Libera me Domine de morte aeterna”—is heard, Currentzis asks the soprano to fill her voice with as much power of hope as true faith is able to provide. From beginning to end, in spite of all the horrors and despairs, when Currentzis interprets Verdi’s Requiem the human ability to believe in the cleansing power of music and the sacred word is never revoked.

ALEXEI PARIN is a Russian poet and poetry translator, music critic, theater expert, and librettist. He is the author of many books and more than 700 essays on music and musical theatre published in Russia and abroad.