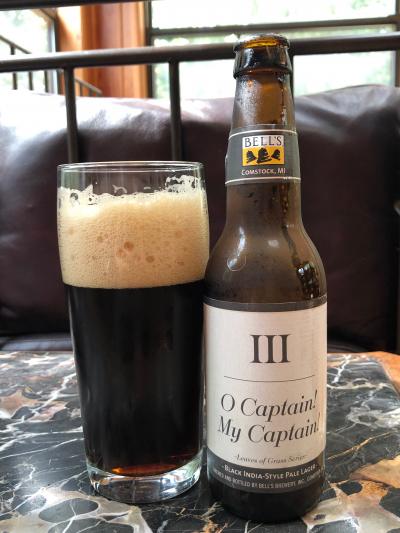 What’s an elegy for Abraham Lincoln doing in a 12-ounce beer bottle? The third Walt Whitman tribute in Bell’s Leaves of Grass Series reinvents the poet’s preferred beer style as a confluence of American Black Ale and India Pale Lager. Bringing roasty malts and Michigan hops to lager’s crispness, Bell’s Brewery labels O Captain! My Captain! a Black India-Style Pale Lager. Even with this mouthful of attributes, its mouthfeel is light. This beer isn’t as dark and opaque as a stout, but the head is frothier—with bead-sized bubbles floating amidst the tiny ones. It rises up in your glass like sea foam.

So why Whitman’s Captain for this enhanced lager? The poem’s publishing history links to its “India-Style.” First appearing in a newspaper in 1865, “O Captain! My Captain!” migrated to Passage to India (1871) before ending up in the 1881 Leaves of Grass. Certainly lager’s longstanding popularity pairs well with the most recited Whitman poem during his lifetime. Marking President Lincoln’s death after preserving the Union, “O Captain! My Captain!” departs from the innovative free verse that made Whitman’s name. While its paired rhymes and iambic rhythms adhere to conventional poetic form, this energetic elegy is Whitmanesque in spirit. The title phrase’s spondees break across the default meter like waves, and off-rhymes such as exulting/daring break from the tighter pairs.

O Captain! my Captain! our fearful trip is done,
The ship has weather’d every rack, the prize we sought is won,
The port is near, the bells I hear, the people all exulting,
While follow eyes the steady keel, the vessel grim and daring;
But O heart! heart! heart!
O the bleeding drops of red,
Where on the deck my Captain lies,
Fallen cold and dead.

O Captain! my Captain! Rise up and hear the bells;
Rise up—for you the flag is flung—for you the bugle trills… 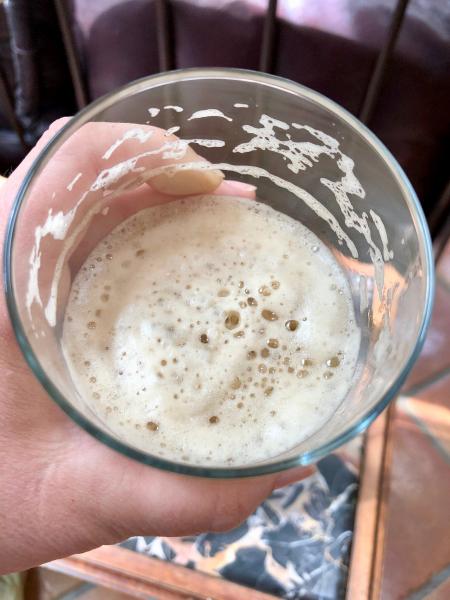 Whitman’s elegy sounds its bells three times, so of course Bell’s Brewery should create a beer version. Like Whitman’s poem, the beer rolls easily down the tongue. O Captain! My Captain! takes a different tack than a Black IPA. Here the malts present first, with just a hint of milky chocolate. The hop finish is zippy (not bitter), lingering on the tip of your tongue with a touch of grapefruit. An easy-drinking lager with unexpected flavors, O Captain! My Captain! pairs best with reading Whitman’s poem aloud in good company. Rise up and taste the Bell’s.

If you missed the brewery’s second Whitman tribute, not one of my preferred beer styles, check out Derek Mong’s piece on The Prairie-Grass Dividing for Kenyon Review. You can find my earlier review of Bell’s Song of Myself IPA here at MR.