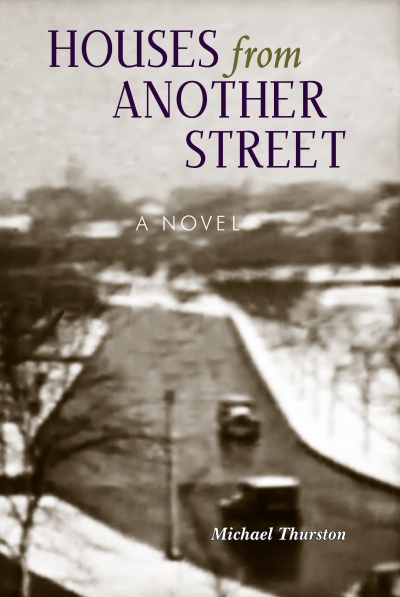 Houses from Another Street by Michael Thurston, Leveller's Press, 2019.

I have a confession to make, one that will likely get me in trouble. Come to think of it, the water I’m walking into here is even hotter than it normally would be. As it happens, our most senior fiction editor is a noted author of a genre I now confess I’ve never understood: YA fiction. To make matters worse: I was even tempted, when writing this last line, to say “so-called YA fiction,” thus revealing my stupidity as well as ignorance, since the genre I hereby confess to not understanding is also one of the few for which a market actually exists in our semi-literate country. And not just a market, of course, also potential movie and TV rights, not to mention all the paraphernalia and accoutrements that make all currently reigning cultural franchises their real money, where the most savvy authors, or their agents, rake in the big bucks. J.K. Rowling, as I’m vaguely aware, has likely set the terms for what literary success looks like in the digital age. But then again, her work, some will surely insist, is kiddie lit, not YA.

What I am interested in, and have always read, is fiction about adolescents, stories about coming of age (to use a phrase once popular and now somewhat hackneyed). What I fail to understand, to put it bluntly, is why anyone would want to read stories about people coming of age written only for readers of that age, as opposed to actual literature, which is written for anyone and everyone who happens to find it, whenever and wherever they find it. The idea that some stories might be too adult, or too childish, that something shouldn’t fall into the wrong hands, or that agents, editors, publishers, and marketing departments should decide which hands are right, well, that sort of policing troubles me as much as anything else I can imagine. Once, when my father came to pick up my ten- or eleven-year-old brother who was visiting me in college, he saw a hash pipe and some rolling papers in my dorm room. “Do you want your brother to see that?” he asked. “Do you want me to lie to him?” I replied. One of the wisest people I know once gave me a definition of obscenity that I’ve since made my own. Obscenity is what happens in the mind of someone who thinks something is obscene.

Freud, as we know, famously figured that everything important had already happened before we turn six. As stories go, that might work for the few remaining fans of medieval allegory, but readers of novels tend to want actual lives, not potential, elemental, germinal relations from our more animal than human years. For Freud, the patterns that we set in those early years determine every choice we make from then on, unless we manage to resolve our early conflicts and move on. Yet how many people in therapy ever stop seeing therapists? Revelations may be easier to achieve than resolutions.

Coming of age, as told by Austen, Goethe, Salinger, or Twain, is no less about patterns, and about breaking free of them. The looming ground of the schoolyard, almost by definition, is scored and scarred by the lines young lives draw. Our narratives return to this terrain again and again, as if somehow we’ve never left, never finished, never found anything to answer that early anguish and heartbreak when we didn’t yet know, and hadn’t yet met, the person we would eventually become. When you read a novel that really gets this right, the intimacy and desire for something more, something other, becomes palpable again, like it once was for us all. The refrain of a song by the Sardinian cantautore Piero Marras repeats a singular lament, Ma la rabbia d’ieri, dov’é? (Yesterday’s madness, where it is now?).

All this, you should have guessed, is simply preamble for a call to action. My friend and fellow former editor, Michael Thurston, has written his first novel, a coming-of-age story, and it gets all of that exactly right. Houses from Another Street is a great read, and a book you must read, so long as by great you too mean excruciating and heartbreaking, for this a novel so intimate and real that you remember its characters to the point you confuse them with those friends and fiends you actually once did know. Like every great tale of schooling, it thus should be no surprise, Thurston’s is also principally about getting the hell out of Dodge.

A few details, then, to give some flavor. The story is set in 1979, the year that made Ted Koppel famous, in a small Texas town, where football is the one true faith capable of competing with the one true faith, somehow our protagonist is in love with poetry, and infatuated with his English teacher, he is obsessed by his inadvertent vision of a senior class beauty, and also addicted to running track and riding his bike by night, two equally artificial means of mobility within the strictures and paralysis of the world that surrounds him. Line by line, the writing up of this world is both precisely observed and gloriously distant: verses from canonical poetry and other literary allusions dance throughout the prose, just to let us know from the get-go, if you’re in the know, that Dodge never had a chance of keeping this boy at home. This man done gone.

To give you a taste, at least, of what makes this book wonderful, I’ll lift a single passage: the moment when our protagonist has at last confronted the older girl he is obsessed with. That singular night, she queries him about his nighttime wanderings, and he offers to show, not tell:

It was awkward, at first, Nicole on the seat and me standing on the pedals, the bike wobbly as we approached the corner, but her hands held my waist and the bike picked up speed and soon we were out of the neighborhood and zig-zagging through back streets, down the alley behind strips of shops, across Centertown Road and through the Baptist parking lot. I never having to say hold on as we sped down the hill from Pleasant View or lean with me as we rounded the Pipeline curve, never saying anything, either of us, no need, the gift given and accepted.

Here I’ll note simply that, whenever prose takes such sudden flight, doing in its saying, well, that we call mastery. If every coming-of-age tale is about patterns (and here the fix is definitely in, the violence repeated, the minds increasingly narrow, and the longing for elsewhere palpable), then every such story must also be about breakage, the siren song of freedom as ruin. What further turns Thurston’s story takes I really shouldn’t say, or even hint, much. You should be aware, however, that the boy’s parents do fight incessantly, that his beloved teacher has a unworthy lover, and that the brother of the girl he dreams of might well be psycho. In short, certain pressures come to bear.

So far as I can tell, what makes any coming-of-age novel work, when they do work like Houses from Another Street, is that they trust their readers, rather than judging them in advance. Taking us along on his return to Payne High, Michael Thurston lets us each decide how to sort through the wreckage—after all, we’ve all left something behind somewhere. Coming of age is not a foregone conclusion. What any great YA novel must show, I suppose, is how the essential fragility of every adult is already contained, crystalized, within the young lives we leave behind. Assuming, that is, we ever manage to make it that far.

JIM HICKS is the executive editor of the Massachusetts Review.