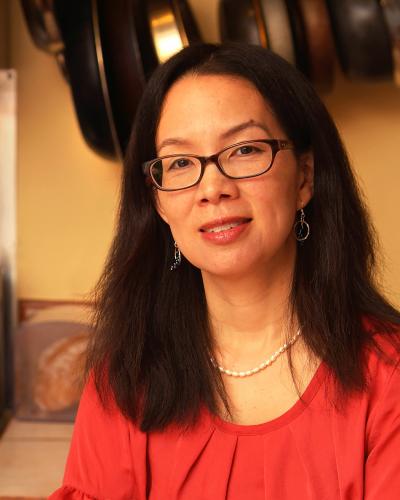 if you meant to spend the morning
this way, and know he’s savoring

Tell us about one of the first pieces you wrote.
The first poem I remember writing was about a rose, although I had no interest in roses. I was seven and thought poems had to be about revered objects. Luckily I got over that early.

What writer(s) or works have influenced the way you write now?
High-school Latin gave me an awareness of meter, a love of form, and a connection to the origins of many English words. About a decade ago I did a reading in Málaga, Spain, where someone pointed out that I tend to use a Latinate vocabulary—something I hadn’t noticed. I’ve also been influenced by the use of form by contemporary poets, including Maxine Kumin, Donald Justice, and Molly Peacock. But I was also influenced by Lucie Brock-Broido, as both poet and teacher, and was drawn to the University of Virginia’s MFA program by the poems of Rita Dove.

What other professions have you worked in?
I worked as a magazine editor at Scholastic right out of college and got through the “starving-artist” years doing freelance editing and writing for educational publishers. I also tried to become a food writer or food editor but was too much of a poet by temperament. I edited things down until almost nothing was left and resisted happy endings.

What did you want to be when you were young?
I was six when I decided I wanted to be a writer, but I didn’t know it would be poetry; I thought “writer” meant fiction. In early childhood I loved art and thought I would stick with it, but it fell away when in high school I had to choose between art and foreign language. Art would probably have fallen away anyway; words are my natural medium.

What inspired you to write this piece?
On sabbatical three years ago, leafing through Chinese cookbooks old and new, I kept encountering a recipe translated as “Crossing-the-Bridge Noodles,” “Across-the-Bridge Noodles,” etc. At the same time, pho was becoming available in small towns across America, including mine, in rural Pennsylvania. The cookbooks described a relationship between Across-the-Bridge Noodles and pho, which makes sense, because Yunnan province shares a border with Vietnam. All of this made me less isolated, food-wise, where I live. Meanwhile, as a single parent with a full-time job, I’m often up against the tension between the desire to read/write and the pressure to plan, shop for, and prepare meals. That conflict, tempered by the satisfaction cooking can provide, made me want to consider the legend of the noodle dish.

Is there a city or place, real or imagined, that influences your writing?
I grew up in Atlanta, with China—the place my parents came from but for decades couldn’t visit—as an imagined backdrop. Then I went north for college and, without intending to, never returned to Atlanta to live, though I have always visited. Over time, Atlanta became the place I imagine. It’s the locus of the collection I’m working on now. Since imagining China is a subset of imagining Atlanta, Atlanta is layered with all kinds of writing possibilities.

Do you have any rituals or traditions that you do in order to write?
Putting it first, when possible. Starting in longhand. Treating it as just another task, not a sacred calling. After a lifetime of writing with black or blue Parker ballpoint pens, I’m trying multicolored marker pens. The colors ratify synesthesia: this topic feels orange; the mood of this draft is dark purple.

Who typically gets the first read of your work?
I have a small group of geographically scattered writer friends, who check in with each other on Fridays, give or take. My neighbor, friend, and colleague Sharon O’Brien, author of the memoir The Family Silver, is a deeply trusted reader.

If you could work in another art form what would it be?
Cooking. I almost went to culinary school during the hard years between my MFA and finding a place in academia but after paying the initial deposit realized that it wasn’t that different from getting an MFA in another field and backed off.

What are you working on currently?
I’ve nearly finished a manuscript of poems that evoke an early generation of Chinese Americans in Atlanta – my parents’ generation, which arrived around the mid-twentieth century – through the evolution of Chinese food there. When my father reached Atlanta in 1948, the city had four Chinese restaurants. Now it’s an international food mecca. Foodies flock to Buford Highway, which in my youth was a nondescript road some hyphenated Americans knew but few others paid attention to. The transformation of my hometown is fertile creative territory.

ADRIENNE SU is the author of four books of poems, most recently Living Quarters. Recipient of a National Endowment for the Arts fellowship, she teaches at Dickinson College, in Carlisle, PA. Recent poems appear in Bennington Review, New Ohio Review, Poetry, and Vinegar & Char: Verse from the Southern Foodways Alliance.