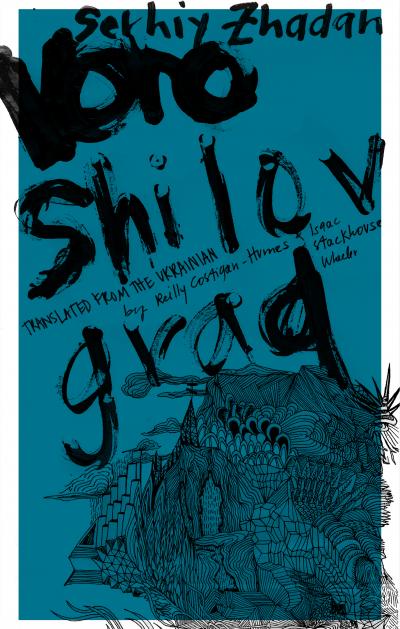 Translated from Spanish by James Badcock

The hall is packed as people wait expectantly for the arrival of the bard. We snaffle a couple of free seats, surrounded by the young and not so young who pay us no mind as they gaze intently at the black curtain. This theatre was once one of the Jewish centres of Chernivtsi, a cosmopolitan cultural capital in western Ukraine, part of northern Bukovina, and a city which annually hosts the Meridian Czernowitz International Literary Festival. After a little while, Serhiy Zhadan, described by Marci Shore as “the Bard of eastern Ukraine,” appears alongside two guitarists to a rapturous welcome from the crowd.

With his sharp features, dressed all in black with half-mast trousers and a sweatshirt, his hair shaved to a grade one on the sides with the rest swept back, Zhadan sits somewhere between a version of James Dean (had he reached the age of 40) and Depeche Mode’s Dave Gahan (with whom he shares musical inclinations as well as a physical resemblance). He grabs the microphone and uses his powerful voice to ask those who are standing or sitting on the steps around the entrance to get on stage and sit beside him. For two hours, Zhadan and his band Zhadan i Sobaky (“Zhadan and The Dogs”, formerly known as “Dogs in the Cosmos”) play some ska songs that have become key musical references for this generation in Ukraine, as well as other tunes to accompany Zhadan’s poetry. Singing, reciting, and moving freely around the stage, Zhadan creates an ambience of communion with an adoring crowd. You can’t help but curse not being able to follow everything he is saying—to become just one more devotee at the ceremony.

After the final encore, he suggests that the party should continue at the bar “Contrabanda,” a dive located on a poorly lit alley whose dreary outward appearance belies the vibrant atmosphere inside. There I find myself a couple of hours later next to Zhadan, and I try to have a coherent conversation with him amidst the noise and alcohol-fuelled, shoving crowd. We managed to pick up roughly where we left off the next morning, after several coffees and sundry other liquids to relieve our hangovers.

Zhadan is a modern-day bard: a translated author, an alt-rock musician, and an activist committed to democracy in Ukraine, someone who connects with many of his compatriots, especially the younger generations. A people’s poet in the best sense of the term, he shines and inspires at a time when many of the country’s political leaders disappoint and disillusion. And yet, behind the front of the chameleonic personality of his provocative music videos, with their hard-hitting satirical content and socio-political criticism, the Zhadan I have gotten to know—over a period of time split between Chernivtsi, Madrid, and his home city of Kharkiv, in eastern Ukraine—is basically someone with his feet firmly on the ground, free of any celebrity ego. He can be intense, sure, but he listens attentively. In a sincere and open way, he shares concerns and opinions about his country and its society. He is a star of the underground scene and, at the same time, a father, amongst others, of Mariya. This four-year old kid casts a skeptical glance when I clumsily break her glass as I hug his father, this summer, in a café in Kharkiv.

Zhadan’s work is a faithful reflection of the harsh post-industrial and post-Utopian environment of today’s Eastern Ukraine and especially the Donbas, regions that, more than other parts of the country, were exposed to long decades of a forced Soviet project. A dead Utopia – murderer, in the eyes of many here, or murdered, in the eyes of many others – but one which persists in some form, like those busts of Lenin that turn up abandoned in waste-grounds, parks, or in the backyards of public buildings.

With sharp humour and a very human touch, Zhadan depicts the kind of characters one finds in that corner of Europe, who are as deeply flawed as they are fascinating—characters like Herman, from his novel Voroshilovgrad, the name used during the USSR period for the city of Luhansk, in the Donbas, the region where Zhadan hails from. Herman is an “independent expert” who works for a Kharkiv politician via a money-laundering platform. A thirtysomething “with a completely useless academic qualification, a dubious job, and enough money” for the lifestyle to which he has become accustomed; seeing it as “too late to do anything different”, his life is, as he puts it, “fantastic”. Then, early one morning, he gets a call from Kocha, a childhood friend, now fallen on hard times. His brother Yura, who runs a dilapidated petrol station in Voroshilovgrad, has “gone” and Kocha asks him to return to look after the business, which is under his name.

Herman travels to Voroshilovgrad, though he plans to return to Kharkiv soon, the following day if he can. However, just as the dark-skinned fortune teller Katarina whispers in his ear (before he lapses into a daydream under the influence of the drink she has served him), “You think you will leave straight away because you’ve forgotten all of the experiences you had there; when you remember, you will find that leaving is harder than you think”. In this process of rediscovery, Herman surpasses the low expectations everyone has in him, and he eventually faces up to the stooges (“the corn guys”) hired by a local Communist Party oligarch. In his desire to control the Donbas petrol station business, the oligarch “offers” Herman money for his premises. At first, the only people by his side are Kocha, who clings onto his petrol pump job; a short, chubby, and mustachioed former football star named Traumatized, recycled as a mechanic and notorious womanizer, and Olga, a red-headed accountant who takes him here and there on her scooter.

Voroshilovgrad is, in many respects, a road novel: a personal journey and a tale of spaces, it combines the ghosts and visions of magical realism with microstories, swinging somewhere between Mad Max and Trainspotting. Like the cop Max Rockatansky, Herman finds himself in a land without law, but with some raw rules; like the heroin addict Renton, he also lives for the pleasure of the moment. Released this past fall in a movie adaptation, The Wild Fields (Dike polje in Ukrainian), the novel is an homage to the discreet epics lived by all those who choose to stay, against the odds. Such choices will seem absurd to many. In a train parked in the sidings, a top gangster chides Herman, “You haven’t got shit to hold onto!”

Ukraine today can be like Voroshilovgrad is for Herman: you go there, you go back again and again, and as the days and seasons flash by, and it gets harder and harder to leave. Maybe it has this effect because, even if one is past all idealism and naivety, in this very real limbo between a collapsed industrialism, with the wild, often criminal politics bequeathed by the failed USSR and its troubled aftermath, and a decadent, self-doubtful West, some things make sense again. This European space between the Carpathians and the steppe is where utopias and dystopias collide. Such collisions can be as dramatic as the Russian-Ukrainian conflict that broke out shortly after the novel was published, gobbling up Voroshilovgrad/Lugansk in the events that shape the context of Zhadan's latest book, Internat.

Or perhaps you stay because of the authentic appeal of the Kochas, the Traumatized, and the Olgas on scooters, not to mention Zhadan himself. Or because, like Herman, you discover that, sometimes, the future is a place where you rediscover and reconcile yourself with that past you have too often wanted to leave behind.

Borja Lasheras is a political analyst and author of Bosnia in Limbo: Testimonies from the Drina River (ibidem, 2018).

James Badcock is Madrid-based freelance journalist. He writes for the BBC, the Telegraph, and the LA Times.