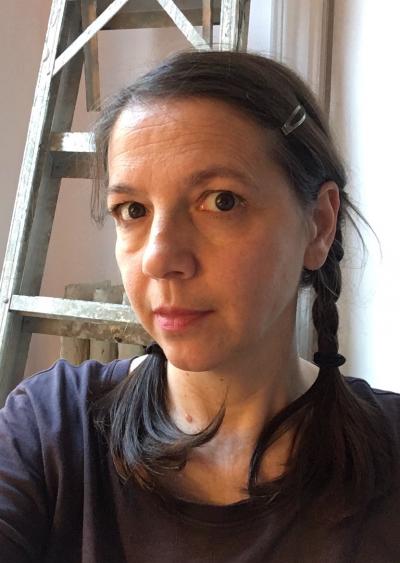 “On the morning of Saturday, June 15, 2013, my brother Sam sent me a link to an AP wire service story. The headline said, “Rangers Rescue Hiker Hit by Fallen Tree in Smokies,” and the hiker was identified as “Nathan Lipsom.” They’d misspelled our last name, but it was close enough that someone Sam worked with had forwarded it to him, asking if this person was any relation. . .” —from “Tornado,” Volume 60, Issue 2 (Summer 2019)

Tell us about one of the first pieces you wrote.
In, I’m going to say, 1992, my downstairs neighbor had a zine called Luvboat Earth. His name is Josh Glenn. We’re still friends, and I’m a regular contributor to his website Hilobrow. Anyhow, I wrote a very short story for Luvboat Earth about going to a Van Halen concert at Wings Stadium in Kalamazoo, Michigan. It was reprinted in a book by Pagan Kennedy about pop culture in the seventies. Pagan and I agreed on a payment of a box of chocolates.

Fifteen years later I was living in South Philadelphia, down the street from the Broad Street Diner, and I had an impulse to write about my love for this doomed diner with its terrible food and oddly disengaged wait staff. I shared the essay with some people, and it ended up being published on the Design Observer website. So that was my second publication.

What are you working on currently?
Two books. One is a memoir that covers some of the same ground as “Tornado.” I’m on my third or fourth draft, I think. The other is a novel in very short chapters. Each chapter is one to four pages long.

What writer(s) or works have influenced the way you write now?
I guess the first writer I read with the kind of attention implied by the word “influence” was V. S. Naipaul. I was taking a class at UMass-Boston called Language and Literature. Each of us had to choose a novel and analyze the author’s use of phonology, morphology, syntax, and discourse, and I picked The Suffrage of Elvira because of my Trinidadian stepfather. I learned about phonology, morphology, etc., in that class, but more importantly I discovered really close reading. I went on to read pretty much everything Naipaul had written at that time, and some of it was sclerotic and depressing, but all of it was flawless on the sentence level. A House for Mr. Biswas is probably still my favorite novel. The characters are people in history and sociology, but they are animated by private appetites and grievances and longing. I also love Gilbert Sorrentino, because he’s formally adventurous and deeply (sometimes laceratingly) intelligent and funny, but everything has emotional ballast, as in the best of Naipaul’s work. Another thing he and Naipaul have in common is that they both revisited their own lives over and over—the same details and anecdotes and lines of speech, even. If you read several of their books you can see them trying to understand what it all means. What it’s for.

What other professions have you worked in?
So many. I was a video editor for a while, and before that I was a linguist, and before that I waitressed, sold flowers on the street, drove a cab, shrink-wrapped records in the old Rounder Records warehouse—just knockabout jobs that young people do. My most lucrative gig to this day was wild posting, which is what they call wheat-pasting (or actually, wallpaper-pasting) promotional posters onto the plywood at construction sites and abandoned buildings. I briefly worked for a company called Boston Mimeo and Stenography. They had a marvelously seedy old office on Milk Street in downtown Boston. High tin ceilings, Cremora, wheezy old dogs sprawled on the linoleum. My bosses were three siblings, all nearing retirement age. Milt did taxes for local businesses; Chinatown restaurants, that sort of thing. Sylvia transcribed legal briefs from mini-cassettes. (One of my jobs was to pick these up at different downtown law offices.) She’d sit at the desk next to mine wearing headphones—fingers flying, swearing under her breath at the lawyers, whom she hated. She told me once that she wore two pairs of support hose at the same time. Their brother Joe, I don’t know what he did. Nodded off in his office, or sometimes he’d go to the dog track in Raynham. It was real A. J. Liebling stuff.

What did you want to be when you were young?
An artist or a writer. I remember saying that when asked, but I didn’t think much about careers. I just wanted to always create things, I guess. I took one of those tests in seventh or eighth grade, and it said I was supposed to be a farmer.

What inspired you to write this piece?
It began as a sensation that was sort of a welling up when I thought about my brother and the impossibility of explaining my relationship with him. It had to do with all these experiences and beliefs and emotions orbiting us like electrons. I wanted to include whatever was necessary to get a reasonably good picture of what it felt like to be his sister. I wanted to see if I could do it, or what would happen if I tried.

Is there a city or place, real or imagined that influences your writing?It’s often the case that a piece of writing begins with the sort of welling up I described in reference to the essay, except the urge comes from a place I’ve lived or passed through. Places are like people to me, in the sense that I have relationships with them: some fleeting, some deep and complex. I think it’s because I moved around a lot when I was a kid. I lived in city apartments, on farms, with different relatives . . . there was all this dislocation, but also the continuity of a few eternal places, such as my grandparents’ river cottage in Michigan, the farm where my aunt and cousins lived, and my father’s rooming house in Cambridge. Those places are harder for me to write about, maybe because I didn’t experience them as an outsider.

Is there any specific music that aids you through the writing or editing process?
I can’t listen to music when writing or editing. I really mean “can’t.” I don’t hear it. If by chance there is music playing while I’m writing, I will block it out so that I couldn’t tell you afterward what it was.

Who typically gets the first read of your work?
I’m very lucky to have Luc Sante as a first reader. Usually he gives me a morale-boosting response, tells me it’s great (or, often, “Swell!”), and then I go back to work.

What are you reading right now?
I’m preparing to teach a three-week workshop in August, an intensive introduction to reading and writing about the liberal arts and sciences, so I’m all over the map at the moment. Darwin and Baldwin and Wittgenstein and Richard Feynman and Gertude Stein—authors from the anthology I’ve been given to work with. And I’m looking for something to give my students that will be more about language structure, because I find that, in the liberal arts, language is usually treated as a metaphor or a political or social object rather than as a system, with endogenous properties that are separate from the uses to which it is put. I want them to read Roman Jakobson or Noam Chomsky—or William Labov, the great sociolinguist, who was my teacher when I was a grad student.

MIMI LIPSON writes fiction and nonfiction. Her first book is a story collection called The Cloud of Unknowing. Her work has appeared in BOMB, Harvard Review, Pitchfork Review, and elsewhere. She lives in New York City.