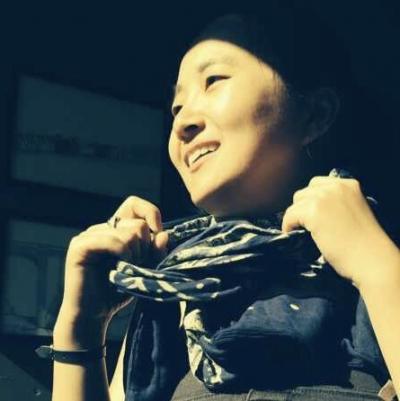 “What they said was, where there is contact
things rapidly change: circular reshuffling of hot rises,
cold sinks. On a sea, we would call it weather.
Here, before the drop & itself rush into
each other, it pressures aloft, a straining escape
from itself, a moment at peace” —From “Drop Coalescence ” Summer 2019 (Vol. 60, Issue 2)

Tell us about one of the first pieces you wrote.
My first language is Chinese, and when I was 10, I spent a summer reading simplified versions of Chinese classics and writing poems in Chinese in an imitation-classical style.  I was reading Dreams of the Red Chamber, in which some of the characters had a poetry circle, and I suppose I was trying to participate somehow.  I don’t remember the actual pieces, though I remember writing about flowers (which I think was a prompt they had in the novel) and trees and the passage of time and other themes of classical Chinese poetry.

What writer(s) or works have influenced the way you write now?
Always a hard question!  Jim Carroll was one of the first contemporary American poets that I read, and I think his influence on me is fundamental, even if I don’t write in a similar style.  Same with the Beats, particularly Allen Ginsberg, whose works I read a lot when I was a teenager.  I took a poetry workshop with Jorie Graham in college, and she asked us to memorize poems, so the ones that I chose to memorize – poems of Elizabeth Bishop, WS Merwin, Sylvia Plath, Marie Howe, Edna St. Vincent Millay – are all in a kind of mental storage for me.  In the last few years, one of my favorite books of poetry was Donna Stonecipher’s “Model City,” which was brilliant and created its own world and its own compelling syntax.I read a lot of fiction and long-form journalism as well, and besides narrative, I think those works teach me about the kind of voice that feels right for me.  Douglas A. Martin’s “Outline of My Lover” was a revelation stylistically when I first read it, as were Elena Ferrante’s Neapolitan novels.

What other professions have you worked in?
I am a lawyer in my day-to-day work, and I enjoy it a lot.  I work on corporate transactions, and much of what I do feels like solving a big, complicated, constantly evolving puzzle, which is intellectually engaging.  I studied chemistry in college, and so have worked in research labs of various kinds, including an organic synthesis lab where I worked on making novel antibiotics, and a physical chemistry lab where I was trying to make a kind of polymer foam that could be coated in metal and used to create lightweight wires.  I worked at a brain bank at Mount Sinai for a while, where my research focused on a neurological complication in patients with advanced HIV/AIDS.  I’ve also worked at a pro bono legal organization helping Medicare recipients appeal Medicare coverage denials.

What inspired you to write this piece?
I saw a video on Quartz a while ago that showed a drop of cold cream hitting hot coffee, and it was really mesmerizing.  The accompanying article talked about a fluid mechanics paper on “drop coalescence,” and that phrase really grabbed me.  I looked up the paper and as I skimmed it, the other things I had been thinking about at the time – a friend who studied fluid mechanics in graduate school and the invisible but insistent forces acting on our lives, like lost loves, geographical randomness, and illness – all kind of came together for me.

Is there a city or place, real or imagined, that influences your writing?
I spent a couple years living in Europe – primarily London but also Leuven, Belgium, together with quite a bit of travel – in my 20s, and I’d like to think those experiences influence my writing, but maybe it is more that the moving about in those years helped me come into my own person, and that has had an impact on my writing.  I find myself writing a lot when I travel and after I get back, so I think there is something about the immersion in a new place that makes me more porous.

Is there any specific music that aids you through the writing or editing process?
Although I love music, I find it hard to write or edit with music playing.  Sometimes I’ll listen to music before I start; usually whatever I’m into at the moment.  Two of my favorite songs of the last year or so are San Fermin’s “Emily” and MHD’s “XIX,” both of which I like playing as I’m about to settle into work.  Other favorites include Elliott Smith and The National.  I tend to get very into one song and play it on repeat endlessly; I went through that phase with “I Buried a Bone” by Blind Pilot, “Buzzcut Season” by Lorde, and “The Trellis” by Nick Mulvey (and many others!).

Do you have any rituals or traditions that you do in order to write?
No particular rituals or traditions.  I tend to write at night, on my computer, though I take notes on my phone or on paper, words or phrases I come across or that jump into my mind, things that I read that I find interesting, etc.  I have a big long file called “Notes”, and I’ll go and read portions of it when I’m starting to write.  Kaveh Akbar talked about “being permeable to wonder” as a condition to writing, and I find that resonates with me.

If you could work in another art form what would it be?
I would love to be able to write songs and sing!  I took piano lessons when I was younger and played the flute and the guitar, but I’ve never been able to write a song that sounds like a proper song.  Otherwise, maybe photography or ceramics – producing some kind of tangible object is always really exciting, and I love imagining the life of objects.

What are you working on currently?
I have a chapbook manuscript that I am polishing and trying to find a publisher for, but mainly I am taking notes and working on new poems.  I try not to be too hard on myself when I am not writing as much as I’d like, by reminding myself to read widely and let words or ideas soak through me.  I’m in one of those phases right now, but have started writing fragments again, which are starting to fit together, so I’m excited to spend more time with these new bits.  I’m trying to piece together a first manuscript for my poems, which is kind of a crazy thing to say and a daunting thought, but I’m thrilled by it too.

What are you reading right now?
I picked up “Tinker Tailor Soldier Spy” by John Le Carre and Haruki Murakami’s “Kafka on the Shore” at a friend’s wedding reception, where they had books for favors (such a lovely idea!), so I’m in the middle of those, with Katherine Boo’s “Behind the Beautiful Forevers” next.  I’m really looking forward to reading Susan Choi’s “Trust Exercise,” because like the novel’s main characters, I also went to a public magnet high school.  For poetry, I recently finished Tarfia Faizullah’s “Registers of Illuminated Villages,” and I have Eloisa Amezcua’s and Erika Sanchez’s books next.  Donna Stonecipher’s new “Transaction Histories” is on my list as well.

Mingpei Li was born in China and lives in New York City. Her poems appear or are forthcoming in Black Warrior Review, The Journal, Magma, Puerto del Sol, Third Coast, Vinyl, and elsewhere.