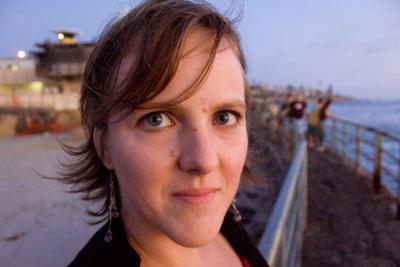 "your feet knowing sand at their arches: the heave the give and grit the quiet
waves of a chalky blue lake the heavy slide
down a small pebble bank
slide like
but stop
this world is not a metaphor for you in me"
—From "Lake Michigan," Summer 2019 (Vol. 60, Issue 2)

Tell us about one of the first pieces you wrote.
This might seem sort of depressing, but I actually think of it as the first time I used poetry to process emotion and in that way it’s a happy story. I was about 6 and wrote a poem about my brother dying suddenly earlier that year. The poem is lost to time, but I remember it started “my brother died, died, died / when I was five, five, five”.  I think another couplet was “and I was sad, sad, sad / but he’ll always be my brother”. The other poem scrap I remember from about the same time starts something like “Among the ferns so small, so sweet…” Typing it out now, I’m struck by it being recognizably my poetry.

What writer(s) or works have influenced the way you write now?
My teachers from my undergraduate and graduate programs, D.A. Powell and James McMichael, have both influenced me deeply in different ways. They taught me what to value in poems and what my best and worst habits are, and their own preoccupations often became my own. There are too many other contemporary poets to name who move and drive me daily. And I wouldn’t think of this but for your question about first pieces, but the musicians I listened to as a young teen were important influences too – I think Ani Di Franco and REM are still fossilized deep down in my work.

What other professions have you worked in?
In no particular order, I have been an executive assistant, a server for greasy spoons and Ivy League faculty clubs alike, a college lecturer, a busker (I played tin whistle and sometimes did lackluster tricks with a diabolo), a special education assistant teacher, and a writer and editor of grade school nonfiction. But writing was always there. I wrote poetry in Outlook as an EA and in my order pad as a waiter, and at the faculty club job I scribbled everything I heard, because I dreamed of writing an exposé on the drink orders of university presidents and how they treated staff.

What did you want to be when you were young?
I always wanted to be a writer, honestly. In high school I read Wittgenstein and decided I wanted to be a linguist too. But then, when I got to college, I realized I was not single-mindedly academic enough to enjoy the discipline as more than a layperson, so back to poetry it was.

What inspired you to write this piece?
Each of the three poems in the MR were written while I was pregnant and at a March-April residency at Ragdale, on the shores of Lake Michigan in northern Illinois. It was late spring, cold, and I had just moved to the Midwest from California. I spent a lot of time walking in the prairie and on the shores of the lake. I also spent a lot of time thinking about the pregnancy. I was in the early third trimester and having potential complications and a lot of anxiety. I tend to be unable to write in a place without writing about that place, using it ultimately as a lens for other concerns, so these poems are very much of the prairie and lake.

Is there a city or place, real or imagined, that influences your writing?
I joke that everything I write is about sadness and trees (see my childhood poems above!). So, nature. Specifically, when I feel a longing to fully saturate myself in nature, I think of the pine forests and hardwood hammocks of South Florida and the Everglades where I grew up, and the hills and forests of the small western Massachusetts town my family lives in now.

Do you have any rituals or traditions that you do in order to write?
I tend to find a place and time that feels stolen; a corner of a yard at a party or 5pm when I’ve said I’m going to water the garden. This works less well now that I have so much less time to steal with a kid in the house. So, I’m trying to use a poetry group I’m in to help me create a more set schedule.

Who typically gets the first read of your work?
My husband is my primary reader. He’s smart, honest, and loves my work. And he’s not a poet but we met when he was in a PhD program for English, so he knows what he’s talking about. It’s a great combination. Ditto on much of that for my sister, who’s also an important early reader. I have a small poetry group in Chicago. The other women in it are so kind and compassionate; we’re teaching each other to have fun with poetry again after a while of it feeling like a soul-sucking business, and I’m so glad they’re among my readers now, too.

If you could work in another art form what would it be?
I would sculpt or compose music. Sculpting is like poetry, forming emotion and image out of raw material, but it’s actually material. I’ve always loved the essential and subjective truth of some of Giacometti’s sculptures particularly. They remind me very much of poems. Music, too, is like poetry, but the layering that’s possible when you compose is something unattainable in a traditional poem (I think).

What are you working on currently?
I’m making a manuscript about pregnancy and early motherhood, particularly through the lens of nature/ecology and anxiety. The poems in the MR are the first published pieces from that manuscript and I’m so pleased they found this home.