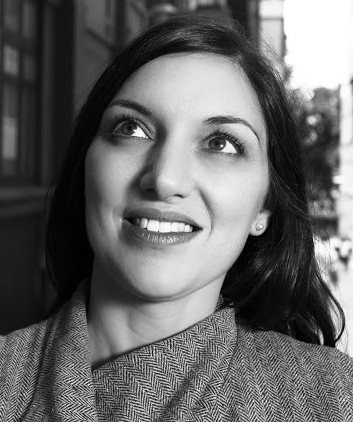 "Fingertips ready at the page tip
with the vigilance of a physician.
An executor of Chopin herself,
she knows the crests and tides
of the Revolutionary:"
--from "The Page Turner" which appears in the Winter 2016 issue (Volume 57, Issue 4).

One of the first poems I ever wrote was a little poem called Vincent, about Vincent van Gogh.  I was fascinated with his paintings as a kid. I suppose it is my fascination with strong, resonant imagery which drew me to the genre of poetry as a writer. The poem appeared in an Australian literary journal called Centoria in the 90’s, which is now defunct.

My poetic heroes include Yeats, T.S. Eliot, Gwen Harwood… There are so many, it is hard to name one who has influenced me particularly. If I had to choose one only, though, it would be Shakespeare. The contemporary Australian poets who have most influenced my writing are Ian McBryde, Dorothy Porter, Jillian Pattinson and Peter Bakowski.

I am also a piano teacher and a freelance copywriter.

As a pianist, I appreciate the value of a good page turner! Poetically, I find I increasingly enjoy depicting people and objects in the background rather than those in the foreground, and thereby subverting the reader’s focus. ‘The Page Turner’ also refers to the metaphorical turning of a page or the arriving at the next, vital stage of something. Though we may not be the instigators of grand deeds, we each have a hand – even in the minutest way - in turning the page of history. The musical piece being performed by the pianist in the poem is Chopin’s Etude Op.10, No. 12 in C minor, known as the ‘Revolutionary Etude’ or ‘Etude on the Bombardment of Warsaw.’

I usually write in a loud, bustling place. I write my best lines in the doctor’s waiting room with a TV blaring and chatting.  Unharmonious human noise actually works well for me in the initial stages of writing a poem. Poetry, for me, is finding the quiet eye in the storm. I have written poems based musical pieces, after hearing them. So far, the music of Beethoven and Chopin have found their way into my poems.

Lines or concepts usually arrive in the middle of the night, in the shower or at other inconvenient times, so I keep a notebook always nearby. These days I try to set aside an hour every day to write, without disruptions. I usually use this time to elaborate on the ideas I have jotted down at random times the day before.

Editors, usually. I whittle away at my poems very quietly. Uncharacteristically though, when preparing for my most recent book ‘The Silences’, I sent some new poems to a poetic mentor and told him to be as brutal as possible.

If you could work in another art form what would it be?
Oil painting.

I just finished putting together a chapbook with Robbie Coburn under Eaglemont Press called ‘The Silences’, which is currently available for purchase online and at selected Australian bookshops. I am now working on my second full poetry collection.

‘Atonement’ by Ian McEwan and ‘The Apocalypse Awards’ by Australian poet Nathan Curnow.

Amanda Anastasi is a Melbourne writer and poet. Her work has been published in magazines and anthologies in Australia, New Zealand, the U.S., the U.K., and Ireland. Her debut collection, 2012 and other poems, was listed in "Top Ten Poetic Works of 2012" in Overland Literary JournaI. Her poetry was shortlisted for the W. B. Yeats Poetry Prize and Nillumbik Ekphrasis Poetry Award.

Our Music Issue contributors and editors put together a Spotify Playlist: https://open.spotify.com/user/themassachusettsreview/playlist/2gsoHz36HVULrULb4mctGD