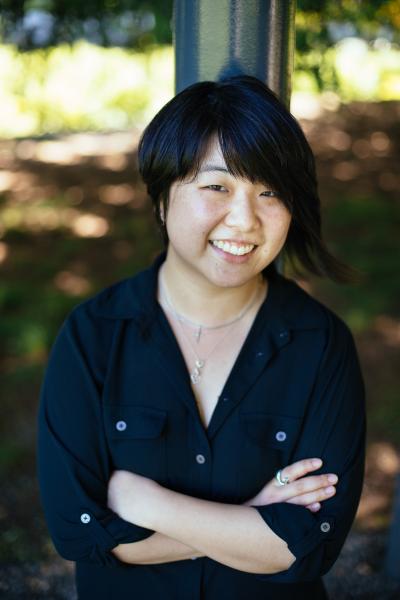 He remembers having to kneel on a chair and brace
one hand against the kitchen table to steady himself,
the other dipping into the aquarium.
—from “Opening the Palm”, Winter 2018 (Vol. 59, Issue 4)

Tell us about one of the first pieces you wrote.
One of my earliest poems was about a dog named Bosco who visited residents in local nursing homes. I can still recall Bosco, with his golden fur and red-and-white bandana.

What writer(s) or works have influenced the way you write now?
There are too many to name. So much praise must go to the poets Ai, Aimee Nezhukumathil, Don Mee Choi, Sun Yung Shin, and E.J. Koh, in whose work I continue to recognize wild possibilities for poetry. Ron Starmer, Jim Daniels, Terrance Hayes, and Campbell McGrath, all of whose mentorships still reverberate through every word I write.

What did you want to be when you were young?
I first wanted to be a secretary because I mistakenly believed they were given their own typewriters upon being hired. Only then did I realize I wanted access to a typewriter so I could be a writer.

What inspired you to write this piece?
I am always interested in moments we hold significant to shaping our identities years later, even though our memories of those moments can be quite slippery. After writing and revising this poem over a few years, I find there is no malice in this poem’s act of violence, only the speaker’s willingness to, as the title suggests, open the palm in the end.

Is there a city or place, real or imagined, that influences your writing?
Seoul, South Korea is definitely steadfast in my heart and work. To my surprise, so is Pittsburgh, Pennsylvania.

Is there any specific music that aids you through the writing or editing process?
I like to loop the same rock song or album depending on the project, but one of my constants is Bach’s Cello Suite No. 1 Prelude in G. The Piano Guys do a version and call it “The Cello Song” that is one of my favorites. I first heard it on the movie Master and Commander, and something wonderful about it has stuck with me through the years.

Do you have any rituals or traditions that you do in order to write?
Not really, but I like to have a cup of green tea on my desk, and something patchouli-scented burning. Among other things, patchouli boosts fearlessness.

Who typically gets the first read of your work?
My husband has become my first reader. As I’ve learned to trust him with my everything, I also trust him with my work. He is an excellent editor who can keenly intuit what a piece might be striving for, and who isn’t afraid to tell me what is or isn’t working. He’s wonderful.

If you could work in another art form what would it be?
Would martial arts count? There are many striking parallels between martial arts and poetry, and it is a beautiful art form that simultaneously engages the mind, body, spirit, and environment.

What are you working on currently?
E.J. Koh and I are co-translating a manuscript of selected works by the Korean feminist poet Yi Won. I’m also working on a second poetry collection, a series of essays on translation, and a series of lyric essays about craft, adoption, and food.

MARCI CALABRETTA CANCIO-BELLO is the author of Hour of the Ox (University of Pittsburgh, 2016), which won the 2015 AWP Donald Hall Prize for Poetry and the 2016 Florida Book Award bronze medal for poetry. She has received poetry fellowships from Kundiman, the Knight Foundation, and the American Literary Translators Association. Her work has appeared in Best New Poets, The Georgia Review, The New York Times, and more. She serves as a program coordinator for Miami Book Fair.