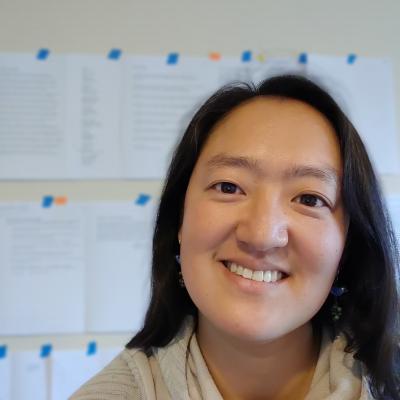 white fluff & peanut butter stuck to the cheap Ziploc. The bus arrived
at 7:05 a.m. The yellow morning light was a warm puddle — soft, I could

Tell us about one of the first pieces you wrote.
I started writing poetry in my childhood bedroom in the log cabin-house my father built. I remember making things up on the page and writing letters to my imagined biological parents in my pink marbled journal. In high school, I wrote poems, looking back on it now, as a way to process my parents’ eventual divorce, and to channel all that teenage angst and rage. It was not until I turned 29 that I started writing again, and taking it seriously. Naively, I had no idea that this literary landscape existed, and I didn’t even know there was such a thing as an MFA.

What writer(s) or works have influenced the way you write now?
My teachers and mentors at the MFA Program for Writers at Warren Wilson College: Brooks Haxton, Daniel Tobin, C. Dale Young, Christine Kitano, and Sally Keith.

Also: Maudelle Driskell and Martha Rhodes. I would be nothing without Ellen Bryant Voigt and Debra Allbery. And to Mary Oliver, my gateway drug, to whom I’ll always be grateful.

What other professions have you worked in?
Currently, I am slinging turkey dinners at a local restaurant while finishing up my MFA, but my job history and resume is a bit haphazard. I have been a fine dining waitress, a landscaper, a nordic ski instructor, an outdoor educator, a backcountry campsite manager, a rock climbing instructor, and a paraeducator in an elementary school teaching kids to read. The job that has most aligned with my writing life was my three year tenure (2012-2015) as the Assistant to the Director at The Frost Place, a gem of a poetry center, located in Franconia, NH. It is a wonderful organization that encourages the creation of poems, and I highly recommend it for poets at any age or level.

What did you want to be when you were young?
This might sound cliché, but I always wanted to be a writer. When I was in high school I would walk into bookstores and run my hands along the spines of the books and dream about one day adding mine to the shelves. I never really thought about any other profession. Well, maybe, a French teacher since I loved learning foreign languages and those teachers in high school were my role models.

What inspired you to write this piece?
“It Was a Yellow Light” originated in revisiting childhood memories and exploring my identity and experiences of growing up as a transracial Korean adoptee in rural Vermont. Waiting for the school bus every morning is just what my brother and I did. Our dog, Sophie, a German Shepard, was trained to wait for the bus with us at the end of the road, and once we got on, she’d amble back to the house and be waiting for us when we got off the bus at the end of the day.

Is there a city or place, real or imagined, that influences your writing?
As a Korean adoptee, Seoul, and South Korea, generally, exist in an imaginary state for me even in spite of having visited briefly in 2013 on a birthright trip. It is a real place, but it also lives on an alternate plane for me since I grew up in rural Vermont and have no language or cultural associations with my birth-country beyond my genetics. The adoptee diaspora sensations are curious and most certainly influence my work.

Do you have any rituals or traditions that you do in order to write?
Nope. I try to write something, even just one line, every day, but, I also fail at this. I guess my “practice” is just to try to notice things in the world and to pay attention. The Grind, a monthly commitment to write one new poem every day with a group of other writers, started by Ross White and Matthew Olzmann, is a practice I have used as a generative tool, on and off, since 2015.

Who typically gets the first read of your work?
My best friend normally hears drafts and various versions of poems. This winter, I will be re-starting a poem-exchange with poets who I trust and deeply value their brains and opinions on my work. I love the continuous discussion of what the line and the sentence can do.

If you could work in another art form what would it be?
If I could paint what I see, or how I perceive light in the physical world, I think that would be a really wonderful way to spend my time. To work with tangible physical material, and not words stuck in my head, might be a nice reprieve from the blank page. However, I do prefer wordsmithing as the visual arts, to me, feel a lot like interloping or stumbling around in someone else’s gig. Right now, though, I am enjoying experimenting with block printing and making wrapping paper and cards.

What are you working on currently?
I am working on a draft of a first-book collection of poems, which explores childhood memories of growing up in rural Vermont, as well as attempts to embody experiences of navigating the world as a Korean American transracial adoptee. Many of the poems directly address the birthright trip I took in 2013 where I met my biological father in Seoul, South Korea. The collection is also varied enough to hold my wonder and appreciation for the natural world where I live and spend my time as a working poet in rural northern New Hampshire. The current version of the manuscript is approximately 40 pages. It needs revision and growth, but mostly it needs time to gestate. Let’s hope I give it that—patience is not a quality that has endeared itself to me, yet.

SARAH AUDSLEY, a Korean adoptee, lives and writes in New Hampshire's White Mountains region. She is a candidate in the MFA Program for Writers at Warren Wilson College. Her non-fiction has appeared in Appalachia Journal and Alpinist magazine and her poetry has appeared in Four Way Review, Potluck Magazine, and the Massachusetts Review.