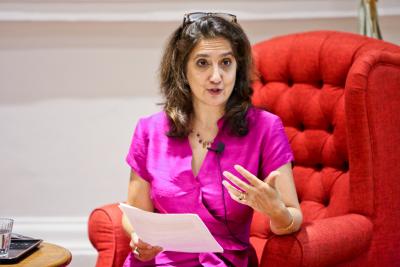 “They came in droves.

All through the cool season, from October through April, the shadow people arrived at the depot. First the locomotive groaned to a stop at Howrah Station in Calcutta, its grooved wheels and iron pistons coated in dust from the long trip across the plains of northern India. A parade of weary figures made their way down the metal steps, the men rail-thin and bandy-legged, tattered shawls crossed over their shoulders, the women clutching their worn bundles, as they were herded into little dinghies that went bobbing down the Hooghly River.”
—from Sweetness, Winter 2018 (Vol. 59, Issue 4)

What writer(s) or works have influenced the way you write now?
Toni Morrison, Virginia Woolf, V.S. Naipaul, James Baldwin.  I loved them for different reasons—Morrison for her language and fierce oracular power; Woolf for her language and exploration of consciousness; Naipaul for the territory he charts and his unflinching nonfiction, however dyspeptic; and finally Baldwin’s extraordinary layered truth telling—even when raging against the cruelty of social prejudice, his scrutiny of the self is bracing, invigorating.

What other professions have you worked in?
Most of my work always involved writing and editing—I was an in-house writer and editor for arts organizations, non-profits, and magazines.  But the rhythm of teaching and the academic calendar has always suited me.  My father was a teacher, and I was used to the pattern of hard long academic time, then long summers traveling or open space.  I also find that teaching, which is a kind of artisanal work, with true interaction with students, and the collegiality of a department is exactly right for me as a writer.  Having just sent off my son to college, it has brought back all my own experiences—how my love of writing was kindled in college and how I looked at my professors and thought: I want to be you, I want to live your life.

What did you want to be when you were young?
An actress!  For a brief while, a vet, since I was cat-crazy.  But mostly a writer.  When I was a kid, I used to write stories and even novels that I’d illustrate and then dream about sending them off to a publisher.  Or I’d watch TV shows and then stay up long past my bed time acting out the episodes I’d seen and rewriting the scripts.

What inspired you to write this piece?
This piece is part of a larger historical novel, Sweetness, which I have been working on for a very long time, and am now revising.  It was sparked by two interests: I wanted to write a novel about indenture, since my ancestors, on one side, came from India to British Guiana to work the sugar cane fields.

A number of years ago I was living in India on a Fulbright, when I heard a story: a man from Trinidad told me how his own grandmother was supposed to be married to a sixty-year old widower, ran away on her wedding night, and fled to the ships taking emigrants to the Caribbean.  The novelist in me was immediately curious. So I told myself, “One day I will use that story.” During my Fulbright, I spent hours under the spinning fans of the National Library in Calcutta, digging into the archives and learned of another kind of women’s tale: English “spinsters” who came over on the “Fishing Fleet” to find suitable marriage partners among the men who worked for the Indian Civil Service. A new idea sparked: What if each of these women, of such different backgrounds, were to collide? This was a way to tell an epic tale—the massive migration of people, across seas, to new continents, driven by one product—sugar—yet seen through the intimate eyes of two women—English and Indian—trying to fashion a new fate for themselves.

Is there a city or place, real or imagined, that influences your writing?
Hmm… I’d say the pulse of New York City and its variety is always in me somewhere.  But there are so many cities that have seeped into my consciousness: Calcutta, with its broken up streets, and black crows on the rooftops and its crumbling British history; London, a place of quiet parks and squares and hushed museums; and most recently, New Orleans, which I’ve fallen in love with—it is unlike any other place I have been to in the U.S.  To write this novel I had to re-envision Georgetown, Guyana at the end of the 19th century.

Do you have any rituals or traditions that you do in order to write?
I need a cup of coffee and I need quiet.  Sun streaming through a window definitely helps with my mood.  I have a hard time with winter so light and coffee matter a lot.

Who typically gets the first read of your work?
Very often my husband, Marc Aronson, who is also a writer, and was my editor for one book, sees my early drafts.  He and I are often talking about my ideas and so his response is one of continuing this conversation.  But I also have a few dear friends who are important readers, especially nonfiction writer Bonnie Friedman.  And I am so fortunate that I have a close working relationship with my Random House editor, Wendy Lamb, for my young adult novels.  I brainstorm with her and always show her my first draft.

If you could work in another art form what would it be?
Any visual medium—photography or film, both of which I love and which influence my storytelling.  The visual arts and film are what I turn to in my ‘down’ time, away from language.  I am always refreshed by a visit to a museum or an immersion in a film or TV series.

What are you working on currently?
I always have a Lazy-Susan of projects twirling before me, each at different phases.  I just finished my first middle grade novel, The Long Ride, which will publish in 2019. I am actually revising and re-shaping Sweetness, the novel from which this excerpt derives.  But I also have another contemporary adult novel in the works, Liberty Park.  Come January I will turn to my next young adult novel, Sanctuary, to be published in 2021.

What are you reading right now?
I have just cracked open Beloved, which I’m embarrassed to say I never finished, even though I love Toni Morrison, and I am reading it very slowly.  I am also reading The Piano Teacher, by Janice Y.K Lee and I just finished Secrets We Kept: Three Women of Trinidad, by Krystal A. Sital.

MARINA BUDHOS is an author of award-winning fiction and nonfiction. Her most recent novel Watched received an Asian-Pacific American Award in Literature Honor.  With her co-author Marc Aronson, she published Eyes of the World: Robert Capa, Gerda Taro & The Invention of Modern Photojournalism, and Sugar Changed the World: A Story of Magic, Spice, Slavery, Freedom & Science, which was a finalist for an LA Times Book Award.  Her new novel, The Long Ride, is due out from Random House in 2019. Budhos has been a Fulbright Scholar to India, and is a professor of English at William Paterson University.