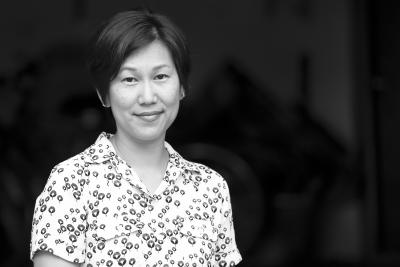 While Professor Jeong explains a poet

should work with farmers to write of harvest,

you recall 195 kilometers away Professor Kim

Tell us about one of the first pieces you wrote.
As a child growing up in Oklahoma, I developed an ear for prosody by reading Best Loved Poems of the American People, an anthology tucked in between my mother’s cosmetology textbooks. Later, on a Tandy 2000 Radio Shack computer, I tried my hand at imitating what I read in that anthology. But my first serious poem was “Terms for Adoption,” a poem in two voices braiding and juxtaposing the found language of my adoption papers with a first-person lyrical perspective.  I submitted it in Fall 1998 to poet and emeritus professor Ed Ochester’s last workshop at the University of Pittsburgh. He liked the poem and published it in 5 AM.

What writer(s) or works have influenced the way you write now?
In my inner library, I always return to Theresa Hak Kyung Cha. More ought to be written about how Dictee has influenced an entire generation of poets. Alongside her work, I go back to Larry Levis whose mastery of tone and scaffolding of time as a discursive layering were important to my first collection Paper Pavilion (2007 White Pine Press Poetry Prize) along with Brother Anthony of Taizé’s translations of Korean poetry.

What other professions have you worked in?
In addition to teaching, small press publishing, and various clerical jobs, I have worked at a gas station, fast food chain restaurant, and telemarketing company. My first job was as a server in my grade school cafeteria. Currently, I am Associate Professor of Creative Writing and Program Director of Race and Ethnic Studies at St. Olaf College.

What did you want to be when you were young?
Not hungry or poor. Growing up working class as a first-generation college student, that basically meant becoming a lawyer, doctor, or engineer. Instead, much to my parents’ chagrin, I chose to pursue poetry. My undergraduate professor and mentor, the poet Lisa Lewis, told me, “You make the law in a poem.” How lucky for me to hear that as an awkward kid from a small town! Thank goodness for state universities, financial aid, and teachers and poets like Lisa who have big hearts and are committed to big ideas and their students.

Is there a city or place, real or imagined, that influences your writing?
Much of my work remaps forced distances created by U.S. militarism, racism, gender and class violence against Korean unwed mothers, linguistic and cultural alienation, and the DMZ wounding the land, hearts, and imaginations of people in the U.S., Korea, and Korean diasporas. I am inspired by spaces of possibility, reckoning, and vision that only poetry can create.

Is there any specific music that aids you through the writing or editing process?
No, but I am inspired by music, in particular contemporary classical music, as a way of thinking through the arrangement of poems into a manuscript. At various moments in my career, I’ve had the privilege of working with extraordinary composers including Steven Gates, Jennifer Jolley, Nebal Maysaud, Andrew Norman, and Thomas Osborne on art songs.

Do you have any rituals or traditions that you do in order to write?
I read. I write. I don’t give up.

If you could work in another art form what would it be?
Opera. I admire how a sustained pianissimo note reaches across a concert hall. I long to be able to write with this kind of power.

What are you working on currently?
I’m co-editing an anthology on auto-critical writing and kinship with Jenny Wills, Joshua Whitehead, and Lisa Moore and developing art songs with the composer Nebal Maysaud and soprano Lubana Al Quntar. In between, I’m working on poems for a new manuscript. It’s exciting yet scary to be writing in a multilingual way, but it’s important to me to push beyond my artistic comfort zone.

JENNIFER KWON DOBBS is the author of Paper Pavilion, Interrogation Room, and the chapbooks Notes from a Missing Person and Necro Citizens. A recipient of grants from the Daesan Foundation, Minnesota State Arts Board among others, she is currently coediting an anthology of auto-critical writing on kinship and is associate professor of creative writing and director of Race and Ethnic Studies at St. Olaf College.