- By Jim Hicks, for the editors 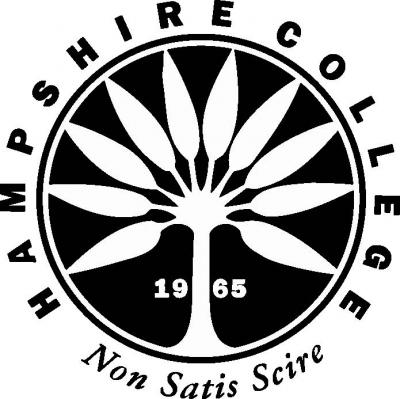 The Hampshire College Seal and Motto ("to know is not enough")

Frankly, when I read the shocking news from Hampshire College this week, it brought back memories. Shortly after I got anointed or conned into taking the job as MR editor, I received an email from my Dean at UMass, asking me to give her a few talking points about the history and importance of the magazine, in order to prep the Provost for a meeting with the Deans Council. Oh shit, I thought, this is trouble. I quickly cobbled something together, of course, but also immediately began doing some serious spadework. Eventually, with the help of our friends, we put together the first self-study of our then fifty-year-old magazine, and we followed that up by organizing an external review. Since then, various administrators have come and gone; at least now we have a paper trail, and a document that can function as institutional memory.

Since you’re reading this post, you know we’re not toast, and that it all worked out for the best. In any case, I write today, not in order to rehearse this history, but to speak about our shared future, and, in particular, the future of one of our partner institutions. It is relevant, though, that, we subtitled that self-study “A Five College Production,” and also that we argued the Massachusetts Review was itself an “early force in bringing UMass faculty members together with those from Amherst College, Mount Holyoke College, Smith College, and beyond.”

When we began, back in 1959, there was no Five College Consortium; though we did quickly have the backing of the original four. The origins of Hampshire College, however, predate our founding: in 1958, the presidents of Amherst, Mount Holyoke, and Smith Colleges, along with the University, appointed a committee that drafted a “New College Plan.” Somewhat immodestly, our self-study claimed that “Five Colleges, Inc. has no finer example [than the Massachusetts Review] of what can be achieved when educational institutions work together in synergy, no more visible emblem, nationally and internationally, of its success.” Though I still believe that a magazine of literature, the arts, and public affairs makes its founding institutions visible in ways not otherwise achievable, clearly this sentence from our self-study would be best applied to the single most innovative, radical, and enduring accomplishment of this collaboration, Hampshire College itself.

In the five days since the news at Hampshire surfaced, the Boston Globe has published a flurry of articles. Word count is one of the surest indications of a newspaper’s sense of importance, so the paper should be commended for this coverage. Nonetheless, the ideas that frame such press coverage are sadly representative of most discussions of higher education today: “Hampshire's current financial troubles raise questions about whether this style of education is a luxury that consumers today can no longer afford.” The same article notes that “alternative schools also struggle with unique challenges, given their unorthodox offerings”; it cites Dennis Jones, the past president of National Center for Higher Education Management Systems (NCHEMS), who comments: “‘It's awfully hard for those institutions and their graduates to prove what they've learned in a job market that is oriented toward hit-the-ground-running and prove-you-can-do-something from day one.’” On its website, NCHEMS touts its “technical capacity associated with data analysis and presentation” as well as its “considerable expertise in helping decision-makers use this information in making strategic level decisions.”

Nowhere, in the Globe or elsewhere, are the assumptions that underlie such language commented upon: that higher education possesses “styles,” that it may be a “luxury,” that students are “consumers,” or that a changing “job market” should necessarily determine what educational institutions do. Though the high cost of a Hampshire education is duly noted ($50,000 tuition, $14,000 room and board), nowhere is it acknowledged that the costs of this increasingly corporatized model of higher education have become everywhere absurd, or that the only way out is to make college education tuition-free. The problem with Hampshire isn’t its dire lack of the billion-dollar endowment that its competitors, and even some of its partners, possess, the problem is that endowment-based institutions are inherently unequal and undemocratic.

When news of the crisis at Hampshire was aired, President Miriam Nelson also announced that the college was hoping to find a partner for a strategic merger by the end of the spring semester. She added that, “The school is also evaluating whether to admit a freshman class for the fall.” A letter from Hampshire faculty, staff, and alums, in response, expresses concerns that “this path forward will exacerbate exactly the budget issues that the Trustees have fiduciary responsibility for, and risks irreparable damage to the educational community in the supposed guise of saving the institution.” The letter notes that “These decisions appear to have been made prior to and independent of the democratic work of the visioning committees and governance committees we are promised. The recent major decisions about us—Hampshire students, faculty, staff, and alumnx—have been made entirely without us.”

We, the editors of the Massachusetts Review, a Five College publication, believe that—not only Hampshire faculty, staff, and alumnx—but all members of the Five Colleges currently risk irreparable damage to an educational community common to us all. My wife each year teaches a literary theory seminar at Smith College; year in and year out, several of her best students come from Hampshire. When I came back from a Fulbright year in Sarajevo, Hampshire Professor Michael Klare’s Peace and World Security Studies program funded the development of my War Stories course (first taught at Hampshire, then at Smith, and now at UMass, with over three hundred students enrolled in just the last two years). Multiple these two stories by hundreds of similar experiences from other Five College faculty, and you’ll begin to understand just how important this institution has been to all education within the Consortium. When it comes to our magazine. . . well, the legendary photographer Jerry Liebling, for whom a building is now named on the Hampshire campus, was on the MR masthead for longer than nearly anyone; Deb Gorlin, co-director of the writing program at Hampshire, has been a MR poetry editor and board member for decades; Kim Chang, associate professor of cultural psychology, recently joined our masthead as well. And as for the essays, art, and fiction that have come to our pages from Hampshire, I can’t even begin to count.

So, let me end this missive with a modest proposal, or two. Why would Hampshire College need to go looking for partners for a strategic merger, when it already has partners—when it was, at least in part, a creation of those very partners which it already has? Why don't they pony up: could they not take some measure of fiscal responsibility, put their money and considerable resources to work, and support a college that they themselves helped create? Why don’t the trustees of those institutions realize that their stake in the future—indeed, the very definition—of liberal arts education is inseparable from the future of Hampshire College? It's high time for some radical, revolutionary thinking, the  kind that invented Hampshire in the first place. So why shouldn’t Massachusetts—where the current system of what passes for health care in this country was more or less invented—be the first state to declare a student’s right to tuition-free higher education? Governor Baker seems to have real affection for charter schools, for private-public partnerships, and for all sorts of other corporate claptrap, so why not fund our state schools tuition-free and allow students to use vouchers for the privates?

I realize, of course, that the same sort of practical-minded folks who shake their heads at the “protests, frisbees, and deep thinking” of Hampshire’s “off-beat path” will be rolling their eyes by now. Yet having Massachusetts behave like a democracy, or having fellow institutions come to the aid of their partner—what’s so funny ‘bout that? For Nick Lowe and Elvis Costello, of course, this was a rhetorical question.