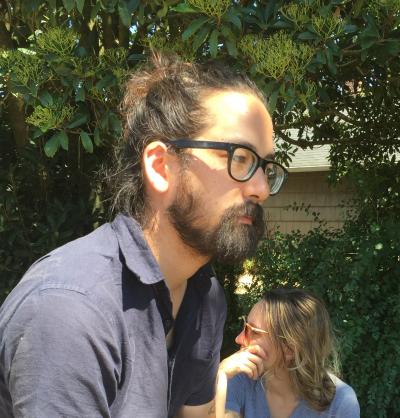 "The first time I visited Domanju, I was ten. I remember a river, black blue and green. I remember a large bell, hanging inside of what looked like the cap of the earth’s largest mushroom. I remember a statue shaped like a prototypical squid. I remember, on top of the squid, another statue, a young girl, holding above her head, as if in offering to the sky, an enormous crane. I remember, on the sidewalk above the river, a young girl and boy, not statues, living, ribbons of every color unraveling from their arms, gathering in colorful piles on the ground."—from “Domanju,” from Volume 59, Issue 4 (Winter 2018)

Tell us about one of the first pieces you wrote.
I wrote a short story when I was six. Here it is in its entirety: Sometimes when we walk upstairs the lights are turned off and my sister Kelly says there is a face on the door with spikes on the face.

What writer(s) or works have influenced the way you write now?
I’m writing a book (prose) about the ongoing afterlife/ruins of Japanese American incarceration. I’ve written several essays (some of which have been published), an introduction (which I recently dismantled), parts of several chapters, and innumerable fragments. It’s been difficult, slow-going, painful. Part of the reason is the writing keeps changing. That’s how it seems. That each time I sit down, as well as each time I stand up, the dream, the vision, of how I want the writing and the book to be, and become, changes, and that the changes are related to melancholy, mercury, indecision, depression, I keep learning new things—uncovering buried bodies, details, falling into shadows, mirages—evolution, and influence. I’m impressionable. For example, some of the (many) writers/works that have been influencing this book, or those I read in 2018: Youna Kwak (The Second Life), Christina Sharpe (In the Wake), Jackie Wang (Carceral Capitalism), James Baldwin (No Name in the Street), Anelise Chen (So Many Olympic Exertions), Q.M. Zhang (Accomplice to Memory), Yiyun Li (Dear Friend, from My Life I Write to You in Your Life), Kapka Kassabova (Border), Edward Said (After the Last Sky.

What other professions have you worked in?
For the past year I've worked in a community college library. I'm leaving this month (or already left). My title is/was: Library Technician. I checked books out, shelved books, ran the library's Instagram. I've cleaned houses, a doctor's office, mowed lawns, worked in landscaping, five bookstores, two day care centers, managed a sculpture studio, a sustainable agriculture non-profit, was an assistant to the director of a creative writing program, director of marketing for a literary press, social media manager for another literary press, substitute taught in a school for the blind, in a mill town in Maine, in an alternative high school in Tucson, taught writing to elementary, middle, high school students in Montana, Taiwan. None of these have been my profession.

What did you want to be when you were young?
Dave Stewart (pitcher for the Oakland A's). Nintendo employee. Travel agent. I wanted to be an artist (after my mother, who is an artist). It did not matter what kind of artist. Actually, I do not know, or cannot remember, if I wanted to be anything. I wanted to escape the confines of my childhood, even as I realized, shortly after my childhood ended, how expansive those confines were. Maybe that is what I wanted to be: an escapee.

Is there any specific music that aids you through the writing or editing process?
I used to listen to Boris's Flood.

Do you have any rituals or traditions that you do in order to write?
Some things that help me write, that help new thoughts to form, and my inhibitions to drop: riding the bus, going to movies, reading James Baldwin.

If you could work in another art form what would it be?
I want to make a film with two opening scenes, either on a split-screen, or separate screens. In one, a goat, tied by a rope to an unattended ice cream cart in a park (Chapultepec, Mexico City), eats an ice cream cone out of the cart’s holder. In the other, several people asleep in a park (Santa Rita, Tucson), are lifted, by an unseen force, off the ground and into the trees. The first scene takes place during sunrise. The second during sunset.

What are you working on currently?
I was commissioned by the Smithsonian Asian Pacific American Center to write an essay about Asian American literature. It was due in October. I failed the deadline. It was extended to December. I failed again. The deadline was just extended a third time! I’m writing about the poetry of Japanese American incarceration. The essay will go into the book I’m writing (see question above about influence). There are a number of poets of the younger (late-sansei through yonsei) generations who are writing about JA incarceration, all of whom are descendants of the camps: Heather Nagami, Brynn Saito, Mia Ayumi Malhotra, Christine Kitano, Brian Komei Dempster, among them. I’ve been thinking about their work in relation to fate, being fated; that the descendants of incarceration are being fated, or beings fated, to return to the ruins, to reenact/re-embody their ancestors’ arrest, in order to reimagine and redirect it, with a specific attention, a necessarily fugitive and defiant motion, and yet, according to the dictates of the underworld, without end. One reason I keep failing the deadline is because my partner and I had a baby in August. Not that I’m blaming the baby! Shortly before she was born, I bought six small notebooks, each a different color: blue, green, yellow, orange, red, purple. I started writing a poem to/about her—at night, while she was feeding, between midnight and 4 in the morning. I just finished the purple notebook. The poem is called “The Hour of the Rat.” It’s partly a mnemonic device, to remember the early months, the sounds she made, especially at night, which I described, in an email to my friend Molly, as like bubbles forming in thick tar, expanding, then popping, or pockets of tar deflating, or frogs in a pond, frogs swallowing pond water, belching, or coconuts falling out of coconut trees and landing in semi-shallow salt water, quicksand.

What are you reading right now?
It's mid-December 2018. Since Meena Alexander's death on November 21, I've been reading her memoir, Fault Lines (the Feminist Press edition, which includes a 90-age coda, "Book of Childhood"), her book of essays, Poetics of Dislocation, and two of her early books of poems, Without Place and The Bird's Bright Ring, which were printed in beautiful, sari-bound volumes in Calcutta. I'm reading three memoirs/portraits of Palestine: Edwards Said's After the Last Sky, Mu'in Basisu's Descent into the Water, and Fawaz Turki's The Disinherited. And I'm reading the Fall/Winter 2018 issue of The Asian American Literary Review, which is a collaboration with the Asian Arts Initiative in Philadelphia, celebrating AAI's 25th anniversary.

BRANDON SHIMODA'S recent books are The Desert (poetry and prose, The Song Cave), Dept. of Posthumous Letters (drawings, with text by Dot Devota and Caitie Moore, Argos Books) and The Grave on the Wall (an ancestral memoir, forthcoming from City Lights), from which "Domanju" is excerpted. He lives in the desert.