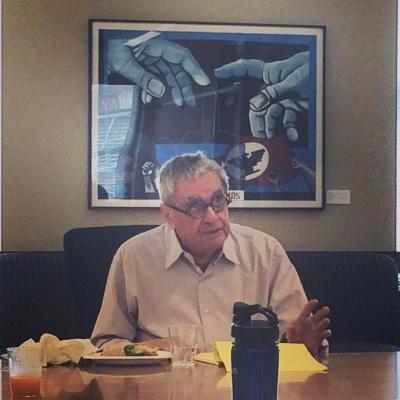 "When I was younger I had a recurring dream of walking in the ruins of Ani. Ani was a city of the Bagratid Kingdom in eastern Anatolia (“Higher Armenia”). It had been a powerful fortress as early as the third century, but by the ninth century Ani became the center of a large kingdom that covered a good part of the region. It was known for its architectural splendors and, as a city of 1,001 churches with a population estimated to be at least 100,000, larger than any Medieval European city at the time, it stood at the crossroads of several trade routes between east and west."  —from “In the Ruins of Ani,” Volume 59, Issue 4 (Winter 2018)

Tell us about one of the first pieces you wrote.
Since I’m a professional historian, specializing in East Asia, principally Japan’s early modern and modern history, my earliest writings were articles cannibalized from my doctoral dissertation and reviews of books published in professional journals. The first piece I wrote was titled “The Progress of Japan and the Samurai Class” and was published in Japanese.

What did you want to be when you were young?
I actually had no ambition when I was younger, as I confess in the memoir of my parents I’ve recently written. When  I graduated from high school I didn’t have a clue of what I would do for the rest of my life.

What inspired you to write this piece?
I should say that the memoir I’ve written, originally titled In the Ruins of Ani, now retitled The Unspoken as Heritage: The Armenian Genocide and Its Unaccounted Lives was an attempt to figure how my mother and father managed to escape the Armenian genocide of 1915-16 and eventually find their way to the United States. What actually prompted me to write this memoir was to account for their lifelong silence concerning their respective experiences and my desire to account for what remained unspoken. Because of their silence and the growing realization that I really never knew or understood my parents the memoir became a re-composition seeking to explain them to my sisters and me and acquiring some grasp of the meaning of the void their silence produced. This is what I mean by unaccounted lives genocidal events produce.

Is there a city or place, real or imagined, that influences your writing?
Not really. I taught in a number of universities in a number of places, Chicago the longest, which I loved because I thought it was the great mythic city of America. But the memoir is about where my sisters and I grew up, Detroit, which has also played a significant role in my formation since I went to college there and began get a glimmer of what I might do for the rest of my life.

Is there any specific music that aids you through the writing or editing process?
The music of the Baroque and earlier has always been important for me, principally because its about the music, as such, rather than both the virtuosity of the  individual artist and heroic titanic symphonies of the succeeding romantic period.

Do you have any rituals or traditions that you do in order to write?
You mean like sharpening pencils endlessly? Probably not apart from writing down in long hand a first draft on yellow legal pads before reworking drafts on my desk top.

If you could work in another art form what would it be?
Writing history, from my perspective, is more of an art form than a putative social science.  I know there are historians who would strongly disagree with this. But because history is actually something we imaginatively conceive, rather than live, it qualifies as art and borders on fiction. I would like to do an ethnography, probably because I didn’t have the foresight or curiosity to question my parents when they were still alive, which would have made the subsequent memoir an ethnography rather than a recomposed account.

What are you working on currently?
I am writing a book on the relationship between archaism and fascism in Japan in two discrete periods of the 1930s and the present. I am also involved in collaborating with others in bringing out a book on Marxism in Japan.

What are you reading right now?
I am reading an English translation of a book I read in Japanese years ago, Orikuchi Shinobu’s, The Book of the Dead(1943), Hisham Matar’s The Return, Fathers, Sons and the Land in Between, and Hayden White, The Practical Past. And, whatever decent crime fiction I can lay my hands on.

HARRY HAROOTUNIAN is the Max Palevsky Professor of history, emeritus, at the University of Chicago. He is an adjunct senior research professor at the Weatherhead East Asian Institute at Columbia University. He is the author of two forthcoming books: Uneven Moments in Japan’s Modern History, and In the Ruins of Ani: The Armenian Genocide and Its Unaccounted Lives.