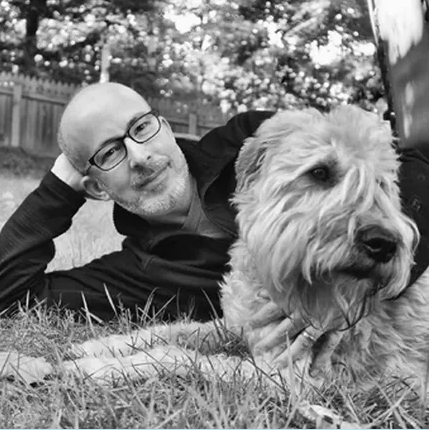 "The flute, the sackbut, the dulcimer
in the rooms of the dying. The harp,
the cornet, the psaltery. The look..."
—from "Music from a Farther Room" which appears in the Winter 2016 issue (Volume 57, Issue 4).

I remember being twenty-one or twenty-two and writing a poem on Christmas Eve in my basement bedroom in my parents’ home in Rhode Island. Confused, half-drunk, and dating an eighteen-year-old girl who had a six-month-old baby, I found myself scribbling lines that were remarkably hopeful and nostalgic. What became of that poem and that young me, I don’t know.

From Frost, Yeats, and Heaney, I developed a sense of the ways that poems could fit into neat rooms that echoed pleasantly. From writers like Melville, Hawthorne, and Cormac McCarthy, I came to admire the possibilities of the long sentence, which with careful reading I could follow like someone walking through those rooms.

I once wrote a poem entitled “The Net Pay of Every Crappy Job I’ve Ever Had,” which detailed, among other things, what it was like to steam-clean garbage trucks, to feed hospital towels into a folding machine, to assemble burgers at a Burger King. One of the strangest jobs I had:  truant officer of sorts in Eldora, Iowa, rousting kids out of bed and driving them to school. I’ve had one or more jobs since I was sixteen. Thankfully, I’ve been a high school English teacher for the last twenty years.

In high school, I took a career test, the results of which told me I should be a farmer. Living in Iowa in the mid-nineties, I briefly fantasized about pursuing that career, but I settled for a backyard vegetable garden instead. I still like growing stuff.

Two summers ago, while vacationing at the Jersey shore, I had a productive period, composing a number of poems. This was one of them. I recall starting it one afternoon after a day at the beach; I was on the deck listening to all the ambient sounds around me—gulls, ocean breeze, an ice cream truck—and thinking about what the dying hear on their deathbeds. Morbid, I know.

Twelve years ago, I had the good fortune of residing in a remote cabin in the wilderness of Oregon, where for seven months I lived and wrote in deep solitude. I often try to conjure up the peace of that canyon when I want to write. There’s also a certain dock, beside a certain boathouse, on a certain lake, at a certain artist’s residency program in the Adirondacks that has a similar effect for me.

I like yellow legal pads and steno notebooks, and I use a mechanical pencil to draft. After the first few drafts in pencil, I move to the computer. I have a maroon recliner in my study on which I’ve written some keepers.

I’ve done some oil painting, and I find it to be just as meditative and peaceful as writing is. My paintings, though, weren’t satisfying to me, since I was using photographs as references. I’d like to return to painting one of these days and abandon the photographic reference and just create from nothing.

After a half-year sabbatical, during which I wrote a screenplay adaptation of Melville’s “Benito Cereno” and completed a new manuscript of poems entitled Wild Columbine, I’ve been pretty consumed by my teaching, though I’ve been trying to generate some new poems and I recently completed a short story.

Gary J. Whitehead is a poet, teacher, and crossword constructor. His third collection of poems, A Glossary of Chickens, was published by Princeton University Press in 2013. His previous books include Measuring Cubits while the Thunder Claps and The Velocity of Dust. He has also authored three chapbooks of poetry, two of which were winners of national competitions. His writing awards include, among others, a New York Foundation for the Arts Fellowship, the Pearl Hogrefe Fellowship at Iowa State University, and the PEN Northwest Margery Davis Boyden Wilderness Writing Residency Award. He has also been awarded the Princeton University Distinguished Secondary School Teaching Award. His poems have appeared widely, most notably in The New Yorker. He lives in the Hudson Valley of New York and teaches English and creative writing at Tenafly High School in New Jersey.