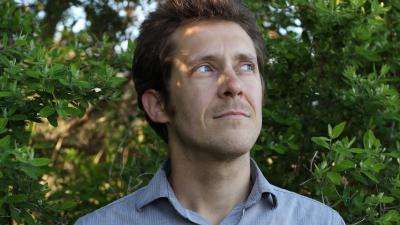 "...They did not skip stones or draw in the sand with a stick or collect shell fragments, though Alex did all those things when the four of them were all together.There was always a beach walk after dinner. And, day or night, Alex and her parents always held hands. Nick tried not to fixate on that—holding hands was a regular thing in some families—but he couldn't watch one of those beach walks without getting the overwhelming impression that Shari and Mark were clinging to Alex, terrified to let go."

Tell us about one of the first pieces you wrote.
Here’s one that’s sort of relevant to “Dreamgirl”: In third grade, I co-wrote a story about two guys who lived in an alligator swamp. When the swamp somehow ran out of female alligators, the guys set out to find new ones with which to restock their swamp and stabilize the population. During their adventures, they came across some human women who were being trafficked. They freed these women who, full of gratitude, returned with the men to the swamp to live out their lives. In third grade, I was quite pleased with the narrative parallel between the alligators finding mates and the protagonists finding mates. My readers, however, were sharp enough to spot the creepy and dehumanizing side of that parallel. The women in the story were, pretty explicitly, breeders.

Fortunately, in that third grade class we had a robust grievance system: Write down anything bothering you, drop it in the box at the back of the room, and the teacher will add it to the agenda of our next weekly class meetings—meetings dominated by collective arbitration of that week’s beefs. My story ended up on the agenda, and the class spent a good portion of a Friday discussing whether or not the story was sexist or objectifying, whether or not it could or should be censored, and the freedoms and responsibilities of the fiction writer. It remains one of the best conversations on those topics I’ve ever had.

What writer(s) or works have influenced the way you write now?
Margaret Atwood changed the way I think about structure and speculative material. Somerset Maugham and Rebecca Curtis helped me rethink authorship and the various ways to complicate it. Julian Barnes expanded my appreciation for and eagerness to experiment with form. Jorge Luis Borges affirmed and validated my suspicion that fiction need not confine itself to psychological realism... or characters... or scenes. And David Remnick has for years been writing and editing a strain of narrative nonfiction that I’m currently looting for my own ends.

What other professions have you worked in?
I’ve tried to work at things other than writing as little as possible. What can I do part-time or freelance to stay afloat? Early answers: web design, data management, copy-editing. I did work full time at a hedge fund for two years so that I could then not work at all for a few years. The only thing I like half as much as writing is teaching—a day job that, unfortunately, needs its own day job.

What inspired you to write this piece?
I saw a vacationing family in Maine taking lots of the eerie beach walks that show up in the story. The parents seemed determined to see their daughter as pathetic, though there was nothing pathetic about her. I couldn’t stop thinking about the wretched sympathy we offer to people we have decided are victims. There have been a number of movements in the last 50 years that could be grouped under the umbrella of Victims’ Rights, movements that want to elevate and prioritize the stories of victims. But in order to make their appeals, to elicit our sympathy, many of these movements propagate and endorse the story that people are cheapened or polluted by the crimes committed against them. Our idea of women, in particular, is wickedly tangled in the language and metaphor of pollution. The telltale sign that we still believe a woman’s worth is rooted in her purity is how we pity her when that purity is compromised. It’s one of those cultural stories so ingrained we seem to have forgotten that it’s a story—one we might revise.

Is there a city or place, real or imagined, that influences your writing?
The spot on the Maine coast where I saw that family is one where I’ve done a lot of writing. That’s the place that taught me I love to write outdoors. It’s also the place where I can put the most distance between me and our story-saturated culture. Periodically escaping our intense immersion in story is the best way I’ve found to remain a critical reader of those stories.

Do you have any rituals or traditions that you do in order to write?
I could probably use some more—the hardest part of writing is starting, and a ritual lowers the barrier. I brew a pot of tea before I start writing in the morning, but I need a similar bit of business for afternoon sessions.

Who typically gets the first read of your work?
I have two great friends who, lucky for me, are also talented writers and thoughtful readers: Heidi Diehl and Joshua W. Jackson. My agent, Sarah Bolling, is also so deadly smart that I’m eager to get her thoughts early.

If you could work in another art form what would it be?
I think the truth is that I’d make installations. Visual artists are my people in some fundamental way that writers are not. They’re more process oriented, more committed to experimentation, less averse to the conceptual. Sadly, I don’t have the manual dexterity for most visual art. Installations, though, would be a snug fit. Anyone looking to turn a Laundromat into an arts venue should contact me.

What are you working on currently?
A medical thriller about the psychosis that has infected the American body politic.

What are you reading right now?
I just finished Larissa MacFarquhar’s Strangers Drowning—I’m committed to stealing back from narrative nonfiction after it has borrowed so much from fiction over the years—and now I’m reading Elaine Dundy’s novel The Dud Avocado and Josh Weil’s collection The Age of Perpetual Light. That guy... good grief he can write.

Judson Merrill grew up in Maine, studied literature and writing at Brown University, and received his MFA from Brooklyn College, where he also taught for several years. His fiction has appeared or is forthcoming in The Iowa Review, Chicago Review, The Southampton Review, Unstuck, and other publications. He has been an Artist-in-Residence at Millay Colony, Ox-Bow, Lighthouse Works, and Guild Hall.