MASSACHUSETTS REVIEWS: Journalism as a Tool of War in The Age of Jihad by Patrick Cockburn 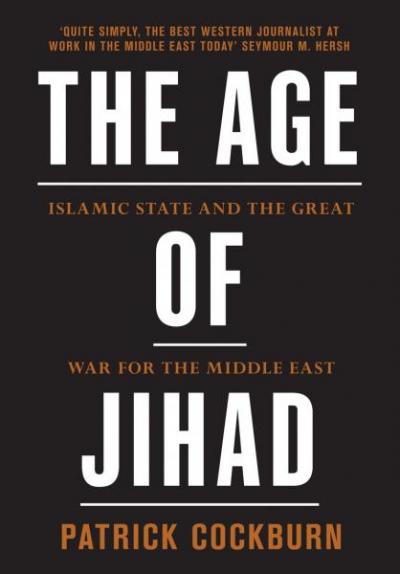 The Age of Jihad By Patrick Cockburn
(Verso Books, 2016)

Journalism as a Tool of War

The Age of Jihad is an abridged but unedited collection of twenty years worth of conflict journalism from Patrick Cockburn, beginning with his coverage of the UN-US imposed sanctions on Iraq, then the invasions and occupations of Iraq and Afghanistan, the Arab Spring with its successes and failures, and concluding with the rise and decline of the Islamic State. This collection largely refuses the benefits of hindsight or the revisions of scholarship, opting instead to give its readers an on-the-ground, in-the-moment perspective of these conflicts as Cockburn saw them. As such the collection reads like a diary, and intentionally so. Cockburn writes that “[j]ournalists are sometimes patronisingly congratulated for providing ‘the first draft of history’, though often the first draft is better than the last draft. There is credibility about eyewitness reporting before it has been through the blender of received wisdom and academic interpretation.”

Indeed, Cockburn’s view from the ground in Iraq during the mid-nineties’s—while the world ignored the genocidal impact of the sanctions, which starved hundreds of thousands to death—offered a rare perspective of an unfolding tragedy that is well worth revisiting in its original form. However, Cockburn has not always avoided the received wisdoms of Western journalism in his reporting. In fact, his narrations of the second US-led invasion of Iraq, the Syrian uprising, and the civil wars and proxy wars that followed rely on a number of explanatory tropes, ranging from the anti-analytical “chaos” and “unrest” to the pseudo-analytical qualifiers “extremist,” “Salafi,” “fundamentalist,” “Wahhabi,” and “jihadi.” This latter term, jihadi, plays a central role in The Age of Jihad. Its nominalized form is treated as an antagonist across Cockburn’s episodic narratives of the conflicts in Iraq, Syria, Yemen, Bahrain, Libya, and Afghanistan, and his belief that jihadis are a new phenomenon, or are at least of new importance, seems to ground the titular periodization of these conflicts.

However, a reader unfamiliar with the Arabic language or Islamic theology could easily be mislead by Cockburn’s simplistic and pejorative use of “Salafi,” “Wahhabi,” and “jihadi,” and his association of these terms with relative adjectives like “extremist.” For example, “jihadi” is an English coinage, but it is unclear why such an invention would be needed, when the borrowing “mujahid” already exists. While the later refers to one who engages in “jihad,” itself a poorly understood term in the West, often crudely interpreted as holy war; the question is whether “jihadi” is intended as a synonym to “mujahid” or whether it has a unique referent. Cockburn’s use of the term suggests that a “jihadi” is one who embraces the crude Western gloss of jihad as holy war and eschews its traditional complexity of duties and prohibitions in all areas of life—from the personal to the interpersonal, communal, societal, and military.

Cockburn offers no explanation for his use of these terms, and his appeal to theology as an explanatory factor is itself a leap of faith. Additionally, the relationship he posits between jihadism, ruthless violence, Salafist Islam (a religious movement advocating a return to the way of life exemplified by the Rightly Guided Caliphs in the earliest years of Islam), and the teachings of Muhammad ibn Abd al-Wahhab is unclear, but assumed to be significant and self-explanatory. The dramatic and mysterious title of the book begs these same questions. Cockburn neglects to explain why we are witnessing the Age of Jihad and not, for example, the Age of Proxy Warfare, or the Age of Inter-Imperial War, or the Age of Terror. Why should we take the alleged phenomenon of jihadism and not any other feature of these conflicts as their fundamental cause or defining characteristic? Cockburn acknowledges the problem only to dismiss it, asserting that the jihadi—and presumably not the mujahid—is the driving force of the last fifteen years of conflict in the Middle East and that their particular brand of “quasi-guerrilla warfare” is marked by its “strong political content” and its “religious fanaticism.” It is this fanaticism, he argues, that makes sectarianism a cause, not a consequence, of these conflicts.

If this sounds at all similar to mainstream narratives of the conflicts in the Middle East, which attributes war to internal causes and essential predispositions to violence, well, it is. For all of Cockburn’s important eyewitness accounts and his critiques of Western policy in the region, his interpretative framework is still marked by Orientalist tropes and the received wisdoms of Westerners looking in on events in the Middle East. Thus, the central task for a reader of The Age of Jihad is to balance the insights of Cockburn’s eyewitness testimony with the limits of his conceptual vocabulary. Could the last fifteen years of conflict in the Middle East and North Africa be understood with more nuance, with the motives and beliefs of local people understood in different terms, with their use of violence understood in historical relation with the violence of Western interventionism?

As much as Cockburn’s more recent work on Syria and the Islamic State might at times resemble only a slightly more informed version of the punditry heard on CNN, this should not discredit the brave and valuable work he did in Iraq during the sanctions and US-led occupation. In fact, this unedited collection of his work makes the trajectory of his journalism over the years easily visible. The critical attitude that led Cockburn to question all of the explanations and justifications given by the US and UK for their actions in Iraq evolved into cautionary coverage of the Arab Spring, which warned against wishful thinking about revolutions and democratic outcomes. But now one can identify elements of sensationalism in Cockburn’s work, as exemplified in the bombastic title of this book. Or take, for example, his representation of the Islamic State—as a cult built around a commitment to extreme violence and puritanical religious values, with only a weak historical connection to the bloodbaths in the Middle East over the last twenty years—which seems to bank more on Western fear and sentimental outrage than on a concern for understanding how this all came to be.

But before we accuse Cockburn of opportunistic sensationalism, his use of attention-grabbing headlines and his preference for easy explanations over scholarship might instead simply reflect a misguided confidence in the ability of the war correspondent to perceive the truth about a conflict. Many do believe that the proximity of a journalist to a conflict lends “credibility” to its reportage. Conflict journalism, with its elements of danger and sense of adventure, and its seemingly intimate knowledge of its subject matter, can be a seductive genre (perhaps even to its authors), and it may lead us to conflate eyewitness testimony with truth. However, mere proximity to a conflict—without the corrective lens of historical, sociological, and cultural scholarship—does not help one rise above the interpretive danger of received wisdom.

How or why Cockburn’s journalism has evolved in such a way is as mysterious as the title of this book. However, his increasing failure to correct such opinions is at least one reason why so many who once looked to him as an ally now feel that he has abandoned them. Despite his lazy understanding of Islamic theology, Cockburn insists that religion is a better explanation for the conduct and character of Islamic militancy than the brutality of the occupation of Iraq, the violent repression of the Maliki government in Baghdad, and the state terrorism of Bashar al Assad’s regime in Damascus. As such, much of his most recent writing often feels like an echo of mainstream consensus: that the Islamic State alone constitutes a casus belli. Where as Cockburn once fought against the kind of conflict journalism that Western powers employ as a tool of war, his voice has now become indistinguishable from it.

Ross Caputi is an activist, veteran, and graduate student. He is on the Board of Directors of the Islah Reparations Project and currently working on an MA in English Studies.