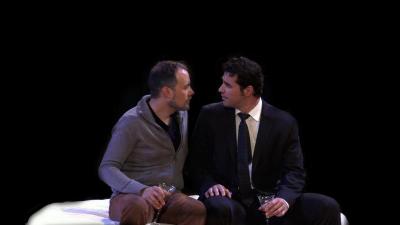 Daniel Kamalic as Newton Arvin and Paul LaRosa as Ned Stofford from the June 2015 workshop of The Scarlet Professor.

“My shame has escaped from that dark room.
What can I do but retreat once again
into the darkness corner of my heart,
into the coldest and remotest part
of the Dismal Chamber?”

So sings Newton Arvin in his opening aria in The Scarlet Professor. Publically outed as gay in small town New England in 1960, his secret life exposed, his face plastered across national newspapers—facing this disgrace and humiliation, he voluntarily commits himself to Northampton State Hospital to retreat from the circus that his world has become. “The Dismal Chamber,” our opera’s central verbal and musical motif, is at once many things: the room in Salem where Nathaniel Hawthorne (Arvin’s idol) isolated himself from the world to write his great works of fiction; the third-story walk-up on Prospect Street in Northampton, where Arvin shared “beefcake” memorabilia with a few select friends and Smith College colleagues; and, more metaphorically, the closet. “The Dismal Chamber” evokes an era—not long ago, really—when the line between the public and private was far less porous, and the public exposure of one’s private life was, for a man like Arvin, the realization of his deepest fear, the ultimate nightmare-come-true.

“The Dismal Chamber” also crystallizes the artistic challenge facing Eric Sawyer and me as we sought to adapt Barry Werth’s biography of Arvin, The Scarlet Professor, into an opera. Barry’s compelling book gives us not only the life story of Arvin but also a mini social history of America at the time of the raid on Arvin’s apartment in September, 1960, He was raided by the Anti-Smut Unit of the Massachusetts State Police, who were acting in accordance with Eisenhower-era laws that prohibited the distribution of obscene materials via the mail.

For the crime of receiving and sharing these magazines—and, more largely, the sin of being gay in America—Arvin and his friends lost their jobs, had their careers truncated, and were subjected to public humiliation. The story is powerful and relevant, and the circumstances would make a great period movie. In fact, a screenplay has been in the works for some time. But does this story make an opera? Or, as Eric put it when I proposed the project to him: does Arvin sing? Described as having a thin, reedy voice, Arvin lived a life awash in secrecy and guilt; after his arrest, his behavior could be described as craven and cowardly. He was a brilliant mind, a witty conversationalist, and he won the National Book Award—but he was no rebel. There is nothing apparently of the hero (or anti-hero) in him. Among his students and colleagues, he was more coolly respected than warmly admired, let alone liked. All in all, not a figure calling out to bring down a hall with an aria.

It all came together with Eric’s landing on “The Dismal Chamber”—a phrase Arvin focuses on in his passionate, curiously personal literary-biography of Hawthorne. Hawthorne, it’s clear, was Arvin’s mirror. (We now understand Hawthorne also had a secreted sexuality, a queerness.) What if the opera juxtaposed the circumstances of Arvin’s arrest with episodes from The Scarlet Letter, another story of secrecy and shame in small town New England? What if the opera were less concerned with the “facts” of 1960 and more with a journey through Arvin’s psychic landscape? What if the milieu were the Northampton State Hospital, and the scenes alternated between that environment and flashbacks, reveries, and “mash-ups” of real-life events, as filtered through Arvin’s consciousness? What if Arvin were faced with a series of interlocutors (allies and accusers alike) who were more outspoken, more “operatic” than he, which then could frame Arvin’s musical moments as a gentler counterpoint to their bombast and boldness? What if among these interlocutors were men Arvin loved, including Truman Capote (a dashing figure from his past) and Ned Spofford (a Smith colleague whom he ending up betraying in court)? Answer these questions, and you come up with a work that not only can sing but MUST sing. You get an opera.

The Scarlet Professor will make its professional debut in September 2017, exactly fifty-seven years after the raid on Arvin’s apartment. The site of the debut: Theatre 14 at Smith College, the place of Arvin’s career and his disgrace, and a short walk from the state hospital (now a housing development) that became his refuge. The excerpt in the Massachusetts Review consists of the first nine pages or so of the libretto—maybe about twenty percent of the entire work. It starts off in comic, exaggerated mode, in Washington, DC, with Postmaster General Arthur Summerfield leading a group of concerned citizens through “deviant” materials he has confiscated.

The scene functions as pure prologue: in fact, Summerfield does not appear again in the opera. This was our way at getting at the social context, to emphasize that Arvin’s plight is not merely local and psychological but necessarily national and social. From there, the opera shifts to Northampton State Hospital, where a psychiatrist (“Doctor”) leads a group of visitors (doubled by the same menacing chorus) through another tour of non-normative curiosities. We meet Arvin; he refuses to talk to the Doctor, she leaves, and, alone, he sings “The Dismal Chamber” to us. From there, beyond this except, we launch into the scenes, flashbacks, and reveries (including one dance!) that collectively tell Arvin’s story, and reveal his state of mind, as we imagine it, in the fall of 1960.

You’ll notice humor in the excerpt, particularly in Summerfield and the chorus’s “Pink Professors.” but also, more subtly, in the Doctor’s arch descriptions of her patients. This humor in the early scenes is strategic. For all the darkness and torment of Arvin’s story, Eric and I were determined not to write a tragedy. Our opera ends on a note of hope—with Arvin taking his first steps out of the hospital to face the world. He emerges from his self-imposed Dismal Chamber. The closet door cracks open, and the process of liberation—personal and social—has begun.

Harley Erdman is a theater writer, whose work includes original plays, opera librettos, book & lyrics for musicals, translations, and adaptations. He is the author of five books, including the influential Staging the Jew and an anthology of translations of plays by 17th-century Spanish women. He is a winner of the Association for Hispanic Classic Theater’s Translation Prize, the American Society for Theatre Research’s Kahn Prize, and a Fulbright Scholarship, and is a professor of theater at the University of Massachusetts Amherst.