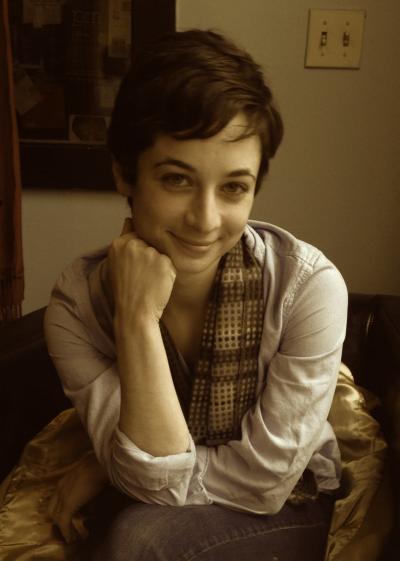 “She empties the car onto the lawn: her gym clothes, an armful of toys, the baby seat her daughter outgrew long ago, and three bags of stuff for Goodwill. She crawls into the back, where she hasn’t been since college when her boyfriend accompanied her home for spring break. They’d snuck out of her parents’ house to the nature reserve parking lot. She’d gone down on him as headlights swept through the woods.” —from “Burn Rubber,” Spring 2018 (Vol. 59, Issue 1)

Tell us about one of the first pieces you wrote.
In elementary school, I was engrossed in writing a free-form, ongoing saga about Zohara and her wolf companion, Blubluck. Inspired by movies like Willow and books like The Lion, the Witch, and the Wardrobe, it featured strange beasts, magical instruments, and “dorfs.” I still remember the first line: “Zohara and her wolf companion, Blubluck, whirled through the golden autumn leaves so rapidly everything became a blur.”

What writer(s) or works have influenced the way you write now?
I don’t know! I’m not trying to be coy, but I’d say almost everyone I read influences the way I write. That said, I went through definite phases: In elementary school I was really into Edgar Allen Poe and wrote a whole slew of stories about crazy murderers. Then, Ray Bradbury inspired a science fictiony period. In college, I read James Joyce, Nabokov, and Faulkner, and became pretty longwinded. Then, Somerset Maugham, Evelyn Waugh, and Oscar Wilde injected some whimsy into my longwinded prose. One thing all of these writers have in common: they’re men. And I was writing about men. Writing about women seemed dangerous somehow, too autobiographical. Reading other women was revelatory. I love Angela Carter, Joan Didion, Aimee Bender, Karen Russell, Katherine Dunn, Jane Austen, Alice Munro—the list goes on. When I began writing from that place of danger, my stories changed. They became spare and, although they no longer feature murderous crazy people, more daring.

What other professions have you worked in?
In order of profession: camp counselor, telemarketer for the Chicago Symphony Orchestra, trunk show assistant, front of house for a theater, editor at a publishing company specializing in greeting cards and scrapbooks, publications coordinator for a theater, communications specialist for a museum, and finally my current job as an editor/writer at Boston University.

What did you want to be when you were young?
In kindergarten, I wanted to be an elephant. When I realized I couldn’t be an elephant, I decided to become a writer.

What inspired you to write this piece?
I was questioning whether I wanted to become a mother. I’d convinced myself that I could not be a writer and a mother, because it seemed the right way to be a writer was to toil in isolation, unfettered by the needs of others. I was going to create Important Work, and I couldn’t afford the distraction. To be a mother was to lose my identity as a writer. To lose myself. Did I want to be a mother? Did being a mother really mean relinquishing myself? I wrote this story—and others—while I was working through these questions. It was a worst-case scenario exercise.

I did decide to become a mother, after all. And it turns out my daughter, now 20 months old, is not the parasite I feared she’d be. She laughs when I put on her shoes. She waves at dogs. She places household objects on her head like hats. She has exposed in me a depth of emotion I never knew I was capable of feeling. I have the sense that she has made me a better writer—if only I could figure out when to write.

Is there a city or place, real or imagined, that influences your writing?
I set this story in the Chicago area; specifically, the suburb where I worked at the aforementioned publishing company specializing in greeting cards and scrapbooks (along with calendars, Disney picture books, and recipe collections). The company was housed in a squat warehouse building. The lobby was welcoming, with all the best books on display and a tank of tropical fish, but the rest of the building was pretty grim. There were no windows, everyone except the CEO worked in cubicles under fluorescent lights, and the carpet was never vacuumed. On my lunch break, I would drive aimlessly around the suburb, stopping or not stopping at Barnes & Noble, Starbucks, and the park. I wasn’t there long (I started looking for another job after three months), but this place stuck with me as the epitome of the soul-deadening office job. I used this setting, and my own experiences there, to give the story’s protagonist a sense of aimless despair.

Do you have any rituals or traditions that you do in order to write?
It’s not a tradition, really, but I write best when I can stick to a schedule. I used to get up early so I could write before work, which was ideal. As soon as I sat down with my coffee and cat (my special writing buddy), I’d start writing. The routine, and the ritual of writing while drinking coffee, seemed to kick-start a kind of muscle memory, so my body and brain knew it was time to work. Now, my toddler likes to get up at five, so I’m struggling to find a new routine.

If you could work in another art form what would it be?
Sculpture, in clay. In college, I was a literature and sculpture major and I loved making life-sized sculptures from the models who posed for our class. There’s something contemplative about working in clay, but it can also be brutal—you build up a rough form and hack the clay into submission before doing the fine work like shaping fingers and smoothing the surface. It’s a lot like writing.

What are you working on currently?
A short story—maybe novella?—about a woman in the wild. That’s all I’ll say for now, but it’s the last story in a collection that also includes “Burn Rubber.”

What are you reading right now?
Before bed, I’m reading Pushcart Prize XLII: Best of the Small Presses 2017 Edition. In random moments, I’m making my way through Kim Adrian’s Sock, a strange little book about socks. It’s part of Bloomsbury’s Object Lesson series “about the hidden lives of ordinary things” (according to the publisher’s description) and it’s weirdly illuminating. On the plane last week, I also started Attic, by Katherine Dunn, who wrote the haunting and bizarre Geek Love, one of my top 10 favorite books.

LARA EHRLICH’S writing appears in the Columbia Review, The Normal School, Minnesota Review, SmokeLong Quarterly, River Styx, and Paper Darts, among others, and she is working on a short story collection. She lives in Boston, MA.