Pinsky at the Poetry Center 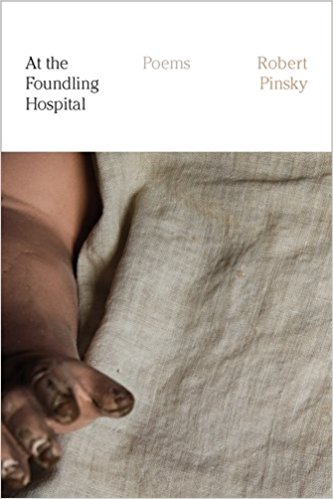 Some unfortunates among you might know Robert Pinsky from one of two contexts. Perhaps you caught the Simpsons episode in which Lisa masquerades as a precocious college student, an episode in which Robert Pinsky, as “Robert Pinsky,” makes a memorable appearance. Where Jasper Johns, in his guest shot on the show, gets only the word “Yoink!” and where Thomas Pynchon gets only a brief self-referential line, Pinsky gets an enthusiastic introduction as “the Tony Danza of the AB stanza,” gets to read part of “Impossible to Tell,” gets cheered on by shirtless students with Basho’s name spelled out on their chests, and gets to ask, as his final line, whether Lisa has put in for the pizza.

More likely, because this is a knowledgeable audience and few of you have my encyclopedic knowledge of The Simpsons, you know Pinsky through one of the most high-profile and important programs he began during his first stint as Poet Laureate of the United States: the Favorite Poem Project. In this project, which has since grown and taken various forms—a set of recordings by the Library of Congress, several anthologies, a website, and the popular Favorite Poem readings, evenings, afternoons, whatever, people share their favorites and the reasons why they love a given poem. To be known as the Poet Laureate who kicked off the Favorite Poem Project might be even better than to be known as the poet who got to play himself on The Simpsons.

I’ve gotten to participate in a bunch of Favorite Poem gatherings, including some that I organized here at Smith, and, especially memorably, one that Robert Pinsky organized at the MLA in Washington, DC, back in 2000 (I chose Auden’s “Lay your sleeping head, my love”), so I, too, associate Pinsky with the Favorite poem phenomenon. And, naturally, I started thinking, when I heard that he’d be reading here, about my favorite Robert Pinsky poems. So, instead of using the few minutes that I’ve got tonight to rehearse his resume – to remind you of his term as Poet Laureate, to tell you about his degrees from Rutgers and Stanford, to list his nine poetry collections, to name-check his Lenore Marshall Poetry Prize (for The Figured Wheel in 1997) or his LA Times Book Award (for his translation of Dante’s Inferno, in 1994), or his PEN/Voelcker Award for Poetry in 2004—I want to figure out which is my favorite poem by Robert Pinsky.

Could it be “Horn,” from last year’s At the Foundling Hospital? It would be unusual for so recent a poem to rise to the top, but that brilliant poem beautifully synthesizes two kinds of Pinsky poems that I love. It’s a poem about music that continues the series of poems about music throughout Pinsky’s career. “Listen,” he writes here, “Listen to what that cat in there is doing. Some figure, / Some hook, breathy honk, sharp nine or weird / Rhythm this one hack journeyman hornman had going.” In that knowing sense of what makes a performance interesting, in that passionate interest in how the practiced performer wrings a message from his medium’s means, the poem recalls such earlier music poems as “Victrola” or “The Green Piano” (both in the 2000 volume, Jersey Rain). But it’s also a poem about an object, one that reads through the materials and craftsmanship of the object for the histories of its production and the intrication of that history with broader histories of making. Pinsky tells us, in “Horn,” about the instrument’s “steel springs and pearl facings,” its “hide pads,” “Normandy brass, keys from seashells // In the Mekong, reed from Belize.”

In this, it reminds me of one of the poet’s best-known poems (a poem rightly famous, I think), “Shirt” (which appears in The Want Bone, from 1990). That poem begins with the garment’s parts—“The back, the yoke, the yardage. Lapped seams, / The nearly invisible stitches along the collar,” and works through these to the history figured in its making. Pinsky makes visible the nearly invisible work woven into those stitches, the history of workers inextricable from the fabric he fastens: “The presser, the cutter, / The wringer, the mangle. The needle, the union, / The treadle, the bobbin. The code. The infamous blaze // At the Triangle Factory in nineteen-eleven.” And he concludes that poem, clearly a candidate for favorite, by bringing that history back to the shirt on his back through the ways we might forget it: “We have culled its cost and quality / Down to the buttons of simulated bone, // The buttonholes, the sizing, the facing, the characters / Printed in black on neckband and tail.”

And those “characters” remind me that “Shirt” and “Horn” both echo and carry on the energy of earlier poems of Pinsky’s about writing itself, about the act of working message from means, poems like “The Sentences” from his first book, the 1974 volume Sadness and Happiness, a poem which, if it doesn’t top my list of favorite Pinsky poems (and it still might), is definitely my favorite poem of missed connection and missed opportunity, and whose last lines—“November sun / lay on the sidewalk, ordinary and final / As the sentences too flat for any poem” capture late fall like nothing since the first chapter of Moby Dick.

But I was talking about “Horn,” and yet another thing I love about that poem is how it is a kind of ars poetica, even as it is these other things I’ve mentioned. Like such Seamus Heaney poems as “Thatcher,” "The Horn” suggests, through its meditation on some nonliterary craft, some essential aspects of the poetic craft as this poet conceives it.  In this regard, it’s like “Rhyme” or “In Defense of Allusion,” two favorites of mine from 2007’s Gulf Music, poems about the means by which the medium achieves meanings. “Listen,” Pinsky writes in “Horn.” “Labor: / Flip all the altered scales in the woodshed.” The poem is at once a call to careful construction and a demonstration of the virtues of this practice, practice focused not only on this particular poem (though it is as wonderfully and complexly wrought as the saxophone it describes) but also, as this poem’s tercets remind us, the listening and labor and flipping of altered scales that went into Pinsky’s translation of Dante’s Inferno, a simply breathtaking work that might itself qualify for this favorite poem laurel except that I’m not sure whether the rules allow that. Nor am I sure whether the rules would let me name specific passages from Pinsky’s 1981 book-length poem, An Explanation of America, but who would not want to consider—for its condensation of ambition and exemplification, its combination of a wide Whitmanian embrace and a dedication to the specificity of its particulars—some stanzas from that poem’s second section, “From the Surface,” a taste of which you can hear in these lines:

What do I want for you to see? I want—
Beyond the states and corporations, each
Hiding and showing after their kind the forms
Of their atrocities, beyond their power
For evil—the greater evil in ourselves,
And great images more vast than Time.
I want for you to see the things I see
And more, Colonial Diners, Disney, films
Of concentration camps, the napalmed child
Trotting through famous newsfilm in her diaper
And tattered flaps of skin, Deep Throat, the rest.

I want our country like a common dream
To be between us in what we want to see
. . .
I mean the way we need to see
With shared imperfect memory.

Which in turn reminds me of “The Street” (from History of My Heart, 1984) and its compassion for those embarrassed by the way “Trouble—fights, the police, sickness— / Seemed never to come // For anyone when they were fully dressed, even as it also makes me think of “The Figured Wheel” and its inexorable rolling “through shopping malls and prisons / Over farms, small and immense, and the rotten little downtowns,” milling, as it rolls, “everything alive and grind[ing} / The remains of the dead in the cemeteries, in unmarked graves and oceans.”

But I was talking about “Horn,” and you’re getting, I hope, a sense of just how difficult it is to name one favorite Pinsky poem. You’re getting, too, I suspect, tired of listening to me struggle with this, and so I’m going to stop. Not stop forever. I don’t think Pinsky’s gorgeous and difficult poems will let me do that, and I relish the effort of figuring out a favorite, but stop for now, so that you can hear, along with me, that “Bondsman of the tool,” that “honker” and “toiler” (as he puts it at the end of “The Horn”), Robert Pinsky.