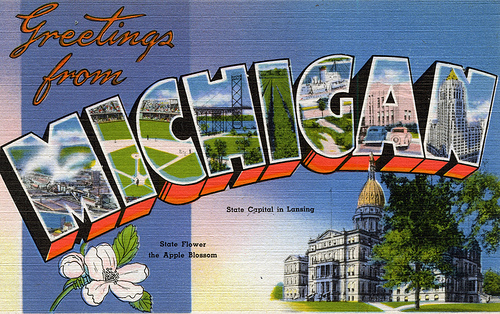 You’ve all heard the line. “You can’t go home again,” they say. In my ear, though, just behind my left shoulder, I still hear that Gatsby whisper, Of course you can!

And, no, I haven’t forgotten how the novel ends, nor am I unaware that at least one of its characters would have rejoiced at the coming of Trump. And yet, while rubbernecking at the train wreck, I have also been meditating this past week or so on the fate of the good old Lansing boys I grew up with—wondering what’s left of them. So, hey there Hockaday, and McVaugh, and you too Sleepy Joe. Or Service, for that matter, or Heglin, or Popoff. Hard to think of any of those guys without smiling. Marazita I know about, slightly anyway (Facebook isn’t much good for more than that). He’s not in Michigan either. And I did hear, though not in detail, about Dave’s accident. So many years ago, and I never got back in touch, but then we didn’t hang out that much any more, even in high school. The rest of them I left behind when I first headed out, to college, then out East, and then overseas. No more spinning under the stars out on Strange Highway for us—stoned out of our minds, making vertigo rise out of the endless cornfields, flat like life.

I was born in Grand Rapids, one of the last cities the Donald visited before our electoral nakbah, because he knew he had friends there. The wealthy, white, Dutch-origin, Republican stranglehold on that city sometimes has seemed unbreakable. My mom was a Dutchie too, though she rebelled early. . . playing hooky with her sister Ag, sneaking  off to see a movie. Okay, so they did end up at The Bells of St. Mary’s, and surely the chemistry between Bing and Ingrid wasn’t sinful. Ah, Grand Rapids. . . I had an uncle who taught at Calvin College, and, yes, the rules there were just as oppressive as you’d expect. No dancing, that’s for sure. I do take some satisfaction in knowing that, in the sixties, his Jim, my cousin, got expelled from that same college for leading a demo. (Of my relatives, some clear favorites.) When we lived there, I was too young to remember much, but I do recall an anecdote my father told me about his years there. A year or so before I was born, he had been called for jury duty, and the question posed to the prospective jurors was whether anyone had been the victim of a violent crime. In case it might prejudice their opinions. Dad had to raise his hand and explain that, yes, on one occasion a man had kept him prisoner for a while, a knife held at his throat. Young social workers apparently get themselves into dicey situations. But since I’m telling you the story, you know how it ended. Dad always was a good talker.

Later on, when he was working for the state, Dad’s boss was Robert Little, the younger brother of Malcolm. If you’ve read the Autobiography, you’ll remember Robert; the bond there was clear, and strong. Years later, in a horrible twist of fate, Michigan itself would come close to murdering Robert’s career. After my dad had become head of the state’s Department of Youth Services, Robert eventually came back to him, to ask for some help. Given what had been done, first to his brother and then to him, I wasn’t all that surprised when Dad told me, “You know, he never really got over it.” He also said that, just maybe, he was the only white man Robert still trusted.

As history will tell it, the other key figure we knew from those years was Howard Wolpe, the city commissioner for Kalamazoo, the seven-term U.S. Congressman, and the chair of the Africa subcommittee in the House when sanctions were imposed on South Africa, overriding a veto from the Reagan administration. (I’ve always thought it odd that, when folks in this country think of Dutch immigrants, South Africa hardly ever comes to mind. Exceptional indeed.) Since Howard was a friend of the family, my sister Peggy babysat for him when she was a teenager. Though he passed on in 2011, I’m sure he wouldn’t have been surprised at all to hear that Peg recently moved to Geneva, recruited for a job by the UN High Commissioner for Human Rights.

As Svetlana Boym, the most beautiful mind to ever meditate on the subject, tells it, “The word “nostalgia” comes from two Greek roots: νόστος, nóstos (“return home”) and ἄλγος, álgos (“longing”).” She continues, “I would define it as a longing for a home that no longer exists or has never existed. Nostalgia is a sentiment of loss and displacement, but it is also a romance with one’s own phantasy.” Though coined from Greek roots, the word itself dates back only to 1688, when the sentiment was regarded as a malady, a curable disease.

I never met Boym, but I was lucky enough to hear her give a talk once, in those years after undergrad, when I had first moved to Cambridge, and hung out occasionally at Harvard. I remember her—or maybe it was Susan Suleiman introducing her—describe her CCCP identity as making her an “expatriate from an ex-country.” History has since filled out the category significantly, but on that day, she lectured about an artist who had taken a standard-issue, cement-block public outhouse (apparently ubiquitous throughout the former Soviet Union) and decorated it as something somewhere somehow between a living room and a sixties “happening.” This, according to Boym, was the good kind of nostalgia: no ex-pat from an ex-country could look upon such work without affection. And yet none would ever forget for a minute what lay literally just below its surface.

Given how Svetlana Boym spoke of modern nostalgia, it’s hard to believe that today she’s not rolling over in her grave, laughing till it hurts. She commented:

Modern nostalgia is paradoxical in the sense that the universality of longing can make us more empathetic toward fellow humans, yet the moment we try to repair “longing” with a particular “belonging”—the apprehension of loss with a rediscovery of identity and especially of a national community and a unique and pure homeland—we often part ways and put an end to mutual understanding. Álgos (longing) is what we share, yet nóstos (the return home) is what divides us. It is the promise to rebuild the ideal home that lies at the core of many powerful ideologies of today, tempting us to relinquish critical thinking for emotional bonding.

Yes, I added the italics. But is anything else needed to see Boym speaking to the Trumpeters here—understanding the seduction, but flagging the danger? You can’t possibly say it more clearly, “[O]ne has to face [nostalgia] in order not to become its next victim—or the next victimizer.”

The poet Izet Sarajlić, like Boym, became something of a expat from an ex-country, except he never moved away, never abandoned the Sarajevan apartment where lived (if one can call it that) throughout the 1992-95 siege. He died only a few years after the war ended, but his country had already left him, though he himself never abandoned it. Sometimes it’s the countries that take a hike. I’ve been thinking of him too these days, ever since Wednesday morning 3:00 a.m., when the results were finally declared, and it seemed clear that Michigan was going down for the count as well. That’s when I shaved my head.

From those years, one poem of Kiko’s seems particularly worth citing here:

What happened with us
overnight, my friends?

I don’t know—
what you’re doing.
What you’re writing.
Who you’re drinking with.
Which books you’re reading.

I don’t even know
if we’re still friends.

Like most of Sarajlić, there’s both simplicity and immediacy here. What I admire most is the crescendo: from doing, to writing, to drinking together, to reading—in a moment where the choice of another’s text as your inspiration could well be the ultimate form of treason. Even if my guys, the Michiganders, well, they weren’t exactly writers, or even really readers, not most of them. Yet they knew I was, so I’m guessing they didn’t see it as treason when I went East to find my tribe.

Yet now, no matter how different the history, or how similar the future, I still can’t help but wonder. And in my ear, just behind my left shoulder, I still hear that Gatsby whisper.

Jim Hicks is the Executive Editor at the Massachusetts Review