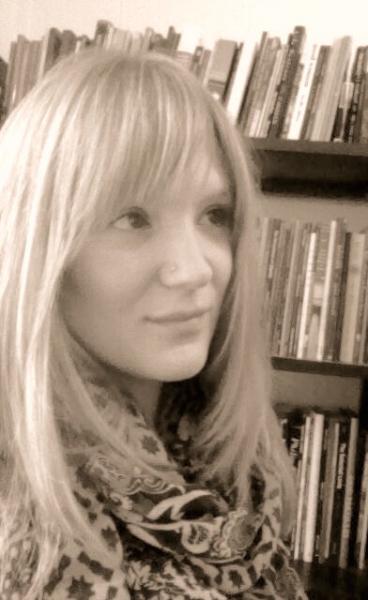 "I wouldn’t tell any of the guys this, they’d never let me live it down if they knew, but I threw up in the bushes after seeing what they did to that girl in the basement. That’s like a real pussy thing to do, right?"—from "Players," in Winter 2017 (Volume 58, Issue 4)

Tell us about one of the first pieces you wrote.
I can’t say I remember much of anything about my earlier pieces, but here are two things I do recall: my paternal grandfather, before he died, showed me two poems I wrote for him and my grandmother for their birthdays, and in the fifth grade, I won a poetry contest for a poem I wrote called “My Wish.” My teacher asked all of us to write a poem and mine was about wishing for everyone “to have a home to go to” and “people to take care of them.” The last few lines of my poem read, “If everyone had the time for people who need our help, my wish could come true.” Twenty years later, my first collection of poetry was published—the poems in that collection all had to do with homelessness and hunger and my volunteer service at a low-income kitchen in Eugene, Oregon.

What writer(s) or works have influenced the way you write now?
I’m currently stepping away from my first love, poetry, and working on a YA novella-type project. I’m not really sure how to characterize it, which is actually part of the fun. The work is loosely based on the Steubenville, Ohio, rape case in 2012, so much of what I’m reading has to do with the case. The stylistic choices I’m making, though, are directly influenced by The House on Mango Street, by Sandra Cisneros and another YA book, Sold, by Patricia McCormick. The chapters are intentionally short, like vignettes, but whereas in these other texts, there is a singular narrative voice, my project relies on a variety of voices to tell the story.

What other professions have you worked in?
I’ve been a teacher for the past sixteen years, but in high school and college, I did everything from working at a TCBY to being a lifeguard at a gym (and a bad one, since I used to fall asleep at my 4AM shift), from a waitress at a diner to a retail associate. One of the more interesting jobs I’ve ever had was working for a plastic surgeon one summer while in college.

What did you want to be when you were young?
My fifth-grade yearbook testifies to the fact that I wanted to be a teacher, a writer, and a musician in the orchestra pit of a Broadway show. Two out of three ain’t bad!

What inspired you to write this piece?
When I was a teenager, I got dumb drunk at a party where there were a lot of boys, but other than puking my brains out for several hours and a six-month-long grounding for being out way past curfew without calling (being drunk certainly didn’t help), nothing terrible happened to me. The boys who were there took care of me and got me home. The next morning—and I’ll never forget this—there had been a story in the local newspaper about some girls who had endured some kind of humiliation at a party at the hands of their male peers. My mother was shaking the paper at me, saying, “That could have been you!” And I remember feeling really indignant about her reaction. In fact, I defended those guys by saying that I’ve known them since I was a kid, that we know their parents, we know how they were raised, that they would never have done something like what happened in Steubenville. So, when the story came out in 2012, I couldn’t help but wonder what the difference was. Was I just lucky? Maybe. But I think there’s way more to it than just sheer luck, and as a writer, I wanted to examine how the conditions for Steubenville could have been created. I wanted to know why, out of all those boys, no one stepped up and said, “Hey, man, you shouldn’t do that---that’s fucked up.” What I’m writing has very little to do with the rape itself, though it’s hinted at or directly mentioned in every chapter; rather, it’s a look into how something like this could have happened at all. What were the red flags? Sadly, finding stories to draw upon has not been difficult.

Is there a city or place, real or imagined, that influences your writing?
Place has always had a profound influence on my work. My first collection of poetry, Psalms of The Dining Room, is all about Eugene, Oregon, where I lived for five years and volunteered at a low-income kitchen/family meals program. My most recent collection, Filthy Labors, is about my volunteer work teaching creative writing at a transitional housing program for homeless mothers in my native New Jersey. Poems about my family are all strongly rooted in New Jersey as well, particularly the Jersey Shore, where most of my best memories took place. I’m a Jersey Girl, what can I say? What I’m working on currently also relies heavily on place. For me, place and authenticity are inextricably linked.

Is there any specific music that aids you through the writing or editing process?
I used to listen to a lot of singer/songwriter artists, but now I don’t listen to music az all. I think that’s because I’m composing more and more out loud.

Do you have any rituals or traditions that you do in order to write?
I wish. I will say, though, that all rough drafts or pieces of rough drafts are written by hand. What happens from there—whether I keep going on paper or sit down at a computer or working a piece out in the air—is really hit or miss.

Who typically gets the first read of your work?
My partner, poet Martín Espada. Not a bad first reader, eh?

LAUREN MARIE SCHMIDT is the author of four books. Her new collection of poems from Curbstone/Northwestern University Press is called Filthy Labors. Other collections include The Voodoo Doll Parade, Psalms of the Dining Room, and Two Black Eyes and a Patch of Hair Missing. Her awards include the Vilcek Prize for Poetry from the Bellevue Literary Review. She received her MFA from Antioch University and teaches English at Bay State Academy in Springfield, MA.