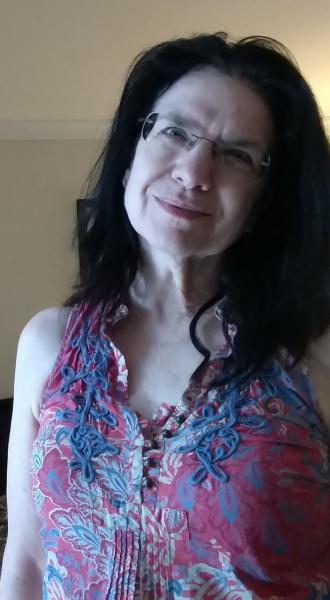 IN MY EARLY CHILDHOOD, the people I loved most in the world made sure that I saw a silver tree. I remember taking a giant breath and then swallowing the sight of that tree so that it would never leave me. Late-born, with a far older brother and sister, I must have been a small child to be on someone’s shoulders, and the wind must have been blowing so hard that the leaves flickered like metal. – from Ambrosia, our September 2016 Working Title. Read and excerpt or buy on Amazon, Kobo, or Weightless Books.

What inspired you to write “Ambrosia”?

A few years ago I bit into an apple at an orchard in Vermont. The taste was so remarkable I gasped. I hadn’t tasted such a perfect apple since childhood. The memory of that apple led me to the story. A few other elements in “Ambrosia” are also drawn from my experience. Like the narrator, I too, as a child, was held on someone’s shoulders and watched as a tree seemed to glow. In the story a character who doesn’t directly appear but whose life is discussed is a blind woman, Gloria. At the end of her life my mother was entirely blind. Writing about Gloria allowed me to think in new ways about my mother and her struggles.

Why this length for your work?

The length depended on the complications involved and the challenge of creating an unconventional love story. I suppose the story is long, too, because it was such a pleasure to write, and I didn’t want to let the story go.

I was born and raised in mid-Michigan. That landscape has influenced much of my writing, particularly the woods and creek near what had been my family’s farm. Currently I live in Pennsylvania, and local places have entered into some of my work.  Otherwise, I tend to invent settings. That way there’s no worry about getting the streets wrong.

What writer(s) have influenced the way you write now?

The Scottish novelist Muriel Spark has been especially important to me. I write a bit about why here.

I teach in the English Department at Lafayette College. Other jobs I’ve held: door-to-door survey taker; typist; freelance writer for The State Journal in Lansing, Michigan; clerk in a credit agency.

What did you want to be when you grew up?

Even when I was a very young child I wanted to be a writer. At that time I also wanted to be a secret agent.  Those choices may have a good deal in common.

I’m reading an earth-shatteringly beautiful novel: A Whole Life, by Robert Seethaler, translated from the German by Charlotte Collins. It’s a very short novel, a novella really, and I’m only about half way through, but the story is already unforgettable: restrained and quiet and masterful. Other books that I have been moved by in recent months: the innovative novel Pond, by Claire-Louise Bennett; and the lyrical yet harrowing The Vegetarian, by Han Kang.

Lee Upton’s most recent books are Bottle the Bottles the Bottles the Bottles from the Cleveland State University Poetry Center (2015); The Tao of Humiliation: Stories, winner of the BOA Short Fiction Award, finalist for The Paterson Prize, and named one of the “best books of 2014” by Kirkus Reviews; and the novella The Guide to the Flying Island from Miami University Press. She is also the author of a collection of essays, Swallowing the Sea: On Writing & Ambition, Boredom, Purity, and Secrecy, from Tupelo; and four books of literary criticism. Her poetry has appeared widely, including in the New Yorker, Atlantic, New Republic, and in three volumes of Best American Poetry. Her short stories have appeared in many journals, including World Literature Today, Notre Dame Review, Ascent, and Short Fiction: The Visual Literary Journal.