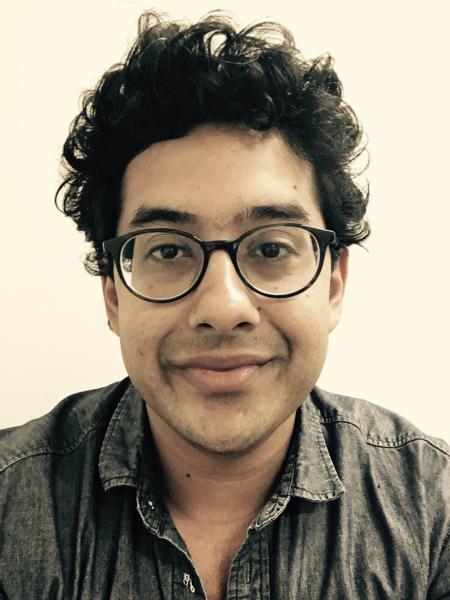 “The church looked strangely beautiful in the early morning light. The street between the houses was narrow and darkened the steps leading up to the wooden doors, but there was enough sunlight spilling out from behind the roof, and the Gothic façade—all angles and points and flying buttresses, architecture I’d always believed brutal and cold—possessed a melancholy grace. I thought of the workers who had once so carefully laid down stones to build the church and the man who’d overseen the construction. Had he imagined, like Mehmed did now, that it would be a beacon of light, something to reflect the divine and live on for eternity?” — from “The Janissary” which appears in our Summer 2016 issue (Volume 57, Issue 2).

Well, if we go all the way back to the distant past that was my childhood (the late 1990s), then my first piece would be a science fiction novel called Space Battles (I was around ten and very obsessed with Star Wars). The story centered on a ten-year-old brother and sister who, by some plot device I’ve since forgotten, end up in a distant galaxy and have to find their way home, while on the way fighting some evil aliens, befriending some nice aliens, and saving a few planets. As the title promises, there are a lot of battles, though only a few of them actually take place in outer space. I’ve always wanted to go back and read it, but I think it’s now on some floppy disk in a cardboard box somewhere in my parent’s garage.

It may not so evident in The Janissary, but I’ve always admired Evelyn Waugh for his ability to mix wit and humor with lyricism. I also often go back to Joyce’s Portrait of the Artist, which I think is one of the best examples of using physical detail and description to mirror a character’s emotional state. Fitzgerald’s Gatsby, too, has consistently been one of my favorites, not just for its prose, but also for what I think is one of the most interesting character dynamics in fiction, namely Nick and Gatsby. In fact, Yunus and Mehmed’s relationship in The Janissary was very much inspired by them.

When it comes to historical fiction, though, no one was better than Umberto Eco. I first read The Name of the Rose in college and it was like having a religious revelation (or at least, what I imagine having one feels like). It made me see that historical fiction could be something much more than just an entertaining costume drama, and could simultaneously embody the spirit of a particular era and comment on our own.

I always wanted to be a writer, probably since I first learned to read. As a child I used to play with toy cars by naming them after fellow students from elementary school and then coming up with crazy narratives, usually ones in which I was the hero and saved everyone. Nowadays, not much has changed, only now instead of playing with toy cars I play with my word processor, and when I make up stories about people I know or in which I’m the hero, I’m better at changing the names.

What inspired you to write “The Janissary”?

It was a combination of things. I read Wells Tower’s “Everything Ravaged, Everything Burned,” which is a story about Vikings that uses very modern language, and I loved how well it worked, how moving the story was and yet also how unsettlingly similar it was to our own world. Around the same time, I also read two of Tolstoy’s early short stories, “The Raid” and “The Woodfelling,” which are about Russian soldiers in the Caucuses in the nineteenth century, and I really liked their subdued and melancholy style. And I had this idea to tell a story that was set in the past but which mirrored the current situation in the Middle East—something about a Muslim army dealing with what we would today call a terrorist attack, flipping the narrative Americans see on the news each day. From there I realized the Ottoman Empire in Europe would be the perfect way to tell that story.

I’m not that particular. I write both in my apartment and at cafés—and sometimes in the classes I teach, when my students are taking a quiz, I even jot down outlines for stories on the back of Scantrons and lesson plans. I think my earliest outline of The Janissary is on the back of an answer key from a grammar lesson. When I’m past the outline stage and actually writing, though, I need my laptop. As much as I like history, I’m not a Luddite: I hate writing by hand, and I need an Internet connection so I can look up etymologies and historical details.

I’m currently a part-time teacher at an SAT prep company, but I’ve also worked as a private tutor for high-schoolers taking AP history classes, written articles for an online content mill, written test-prep materials for an educational website, and briefly written SAT questions for a Silicon Valley startup. While none of these are exactly “professions,” taken together they do accurately describe the lives of a lot of people I know, a literary working class trying to balance their need for free time to write with their need for daily five-dollar cups of pour-over Yirgacheffe coffee.

The Bay Area, where I grew up, figures a lot in the novels I write. If I’m writing historical fiction, I can easily imagine a place I may never have actually been, but if I’m writing about the contemporary world, I almost always write about the Bay Area, because I know it so well. I know the freeways and the BART stations and how green the hills look in the winter as I’m entering the Caldecott Tunnel and how Mt. Diablo looks on a sunny day driving out from my parents’ house, and how San Francisco looks at night from a rooftop in Berkeley. These details and images are probably stamped on my mind all the more so because my own development as a writer took place there; I’m sure that even in my descriptions of sixteenth century Ottoman Hungary, there are shadows and traces of the environments of the Bay Area.

Not really. I often read over the last few pages of what I previously wrote to get back into the piece’s particular style or rhythm but otherwise I just start typing.

Coffee, no milk, no sugar. I prefer pour-overs to espressos because they take longer to drink. There’s nothing more frustrating than settling down at a café with your laptop for an afternoon of writing and then finishing your espresso in two minutes. Oh, the daily struggles of the writer’s life. . .

If I’m taking a creative writing class, I usually share my first draft in workshop. Outside of classes, I do have some fellow writers who I sometimes share stuff with, but I only really give them drafts that are close to finished. To be honest, my first reader is usually myself—after finishing something, I don’t think about it or reread it for at least a few months. I read a lot in my spare time, and after a few months I can be in a completely different literary headspace than when I wrote the piece, with different prose styles on the forefront of my mind, different subject matters, different historical eras. So if I reread something I wrote months ago and still really like it, it means maybe I’ve got something good.

Aatif Rashid is a writer living in Los Angeles.