Qandeel Baloch and the Importance of Loud Women 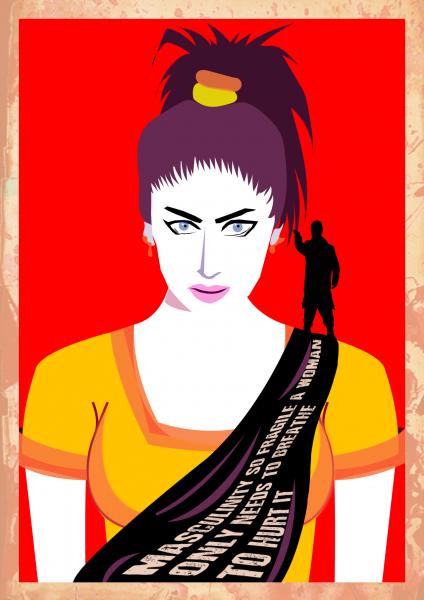 Qandeel called out to me some months ago from her bedroom - through the screen of my phone, playfully offering herself to a cricketer in an uploaded video, pouting heavily without any pretense or attempt at veiling the display of her sexuality. We were all instantly captivated, compelled to sway to this woman’s song. In a society where even the mention of human sexuality is hushed out of conversation she was undeniably present. She was unapologetic, unafraid, and so very loud.

Growing up as a woman in Pakistan teaches you erasure. How best to silently slip into the cracks so you aren’t seen, heard, and no delicate sensibilities are upset. If you are effaced, you cannot offend. This is why Qandeel was so striking: she was constantly flooding the Internet with images of herself, videos, audio files. Dancing as supplication for cricket teams, posting selfies with clerics, posing herself for titillating images, and, sometimes, she would whisper from a darkly lit room and ask the world why it was so cruel. What kinds of good people hurl abuse so early in the morn, she asked.

Her behavior was beyond bold, it was subversive. She employed her provocations to toy with and expose patriarchal authority. The panicked scramble following images she shared with Mufti Qavi made clear the farcical nature of the religious establishment. Her offering strip teases to the Indian cricket team highlighted the confused masculinity embedded in competitive sports culture and rivalry in South Asia. She parodied men – threw them into confusion because they simultaneously desired and felt threatened by her.

Qandeel was a remarkable, working-class woman who took control of her own narrative. Shortly before her death, she reluctantly offered more information on her personal life; she was forced into an abusive and dangerous marriage at seventeen. She somehow managed to walk away - forced to leave her son behind - and moved from job to job until she shot to social media stardom, all the while supporting herself and her parents.

Many have said that her death was inevitable, that our society could not handle a woman of her constitution, but such comments are dismissive and counter-productive. It is an argument for further silencing women couched in the language of protection. The life Qandeel lived was brave and dangerous because she made us feel, for the most fleeting of moments, that there was a space for us in our own homes. That we didn’t have to be virginal and silent to exist in our own culture. I cannot emphasize enough the radical nature of her public performance of her sexuality and what that meant to so many girls who could never openly acknowledge the existence of such a thing. Her murder may not be a novel occurrence, but her life most certainly was.

The pain I feel at this loss is real, and I feel its tide swell in those around me. The words I write here are real, just like those Qandeel had begun to speak in the weeks leading up to her death. She was becoming more focused and vocal about her feminism. The work of mourning her includes refusal to let her voice and actions be forgotten with her. I have learnt the importance of visibility and how desperately women need to know there are others like them who fight the same battles every day; that our sexuality, our domestic abuse, our fight for independence is shared. Nearly every woman I know is a quiet revolution. Qandeel was a loud one – a siren calling out to the rest of us to join her.

Amal Zaman is an Editorial Assistant at The Massachusetts Review. She studied English and Government at Smith College.