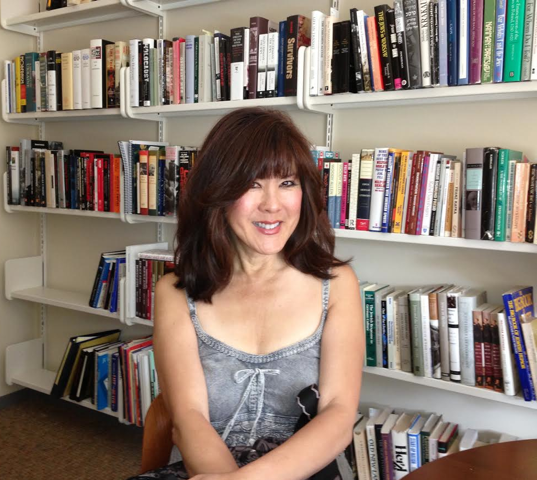 “Even thirty-five years ago we cut the silhouette of widow mom and daughter. No one had to ask where the husband/father was; you knew that figure was formative but gone and not by desertion but by death, that we were alone everywhere we went and carried his loss on our back. It’s been this way for so long I can’t recall it being any other way; too long in one sense, not nearly long enough in another. I’m not her only child and we all have our roles, but I’m the one who took her arm when she lost her husband.” — from “You Two Are So Beautiful Together” which appears in our Summer 2016 issue (Volume 57, Issue 2)

In the fifth grade, I wrote my first “book,” a Nancy Drew-like mystery, then began a story about a precocious girl named Betty Lou. Every day, I would read a new chapter from “Betty Lou” to my class. The school year ended before I finished it and I was kind of relieved, because it had grown to several hundred pages and Betty Lou’s never-ending adventures were beginning to bore me. As a teen I fell into poems and short stories, declaring each work “a masterpiece!” Hey, the delusions kept me going. Years later, it was as if I “came to” and began what I viewed as a daring, if not taboo, work in 1993: a brutal commentary on life as an estranged Asian American girl coming-of-age in 1970’s white America. Odd as it sounds now, no one talked about it back then, not even me, though I penned the experience. “Around the Block” appeared in a university journal and also in an anthology published by the Asian American Writers Workshop.

I pay less attention to plot and arc than the epiphanic lines or moments in a story that grab me, speak to me. I think that’s because I recall my own life in vignettes: the old friend who wants a second glass of wine but won’t because he knows he’s saying too much; the unsettling look in the eye of a woman whose husband will commit suicide the following month. Graham Greene, Vladimir Nabokov, Raymond Carver, Colette, Albert Camus, and John Cheever, to name a few, capture what infatuates me and I am probably, on some level, sometimes, under their influence.

When I was young, I wanted to grow up and be a dancer on Hullabaloo or Shindig—either show, as long as I could wear white go-go boots and miniskirts—or a writer. I’m happy to say I grew up to be the latter. A longer shelf life, right?

What inspired you to write “You Two Are So Beautiful Together”?

Many of my personal essays, such as “You Two Are So Beautiful Together,” are born of one telling line I hear that hangs out in my head. In this case, it was spoken by a customer in a grocery store who was watching me with my elderly mom at the meat counter. “You two are so beautiful together,” she tearfully expressed. My brain quietly imploded.

I do need solitude and silence to write—I could never write in a coffee shop or a room with the TV on. It’s been awhile but when I’m deep into a novel, it’s as if I go under water. I don’t leave home or talk to a soul for days. When I come up for air, I can barely remember where I’ve been. Because my eyes and brain feel literally bruised, I have to go outside and play, feel the sun, rejuvenate—sometimes for weeks.

Since you asked, my sister and I own a fabled little chocolate shop in the heart of downtown Washington, D.C. We sell bonbons and books and, indeed, authored a memoir, Chocolate Chocolate: The True Story of Two Sisters, Tons of Treats and the Little Shop That Could, which was published in five countries. As soon as you walk in our doors, you’re overcome with this magical feeling, as if nothing bad can happen here.

My childhood impressions of post-war South Korea often haunt my work. As tragic as they were to a girl who grew up in the United States, I’m grateful for them. They offer a richness to my portraits and a defining philosophy in me.

I just have to be in the mood and have the time. Ironically, too often I get my best ideas while driving. There I am, on fire, waiting for a stoplight so I can jot down notes. What’s frustrating is that by the time I land back at my writing desk, I often go blank.

Coffee and chocolate are always within reach. Always.

My husband, Gabriel. When I have a first draft of a new work, all day long I’m giddy knowing the moment will come that evening when I’ll pour myself a glass of wine and begin with that opening sentence . . . He’s my captive audience of one and, frankly, I cherish that. His reactions are never a hollow or generic: “That’s great” or “I liked it.” No, he’ll comment on the parts that wowed him and the parts he feels could be stronger. While listening to the first version of “You Two Are So Beautiful Together,” he was so animated during the reading, not with bravos or criticism but with reactions and questions that couldn’t wait. I thought: Why not add him to the picture by incorporating his remarks? When I did, the essay took on another dimension.

Born in Cambridge, MA, Frances Park is the author or co-author of ten books including novels, children’s books, and a memoir published in five countries. She has been featured on Good Morning America, NPR, The Diane Rehm Show, CNN, and Voice of America. Currently at work on a collection of personal essays, Park lives in the Washington, D.C., area.