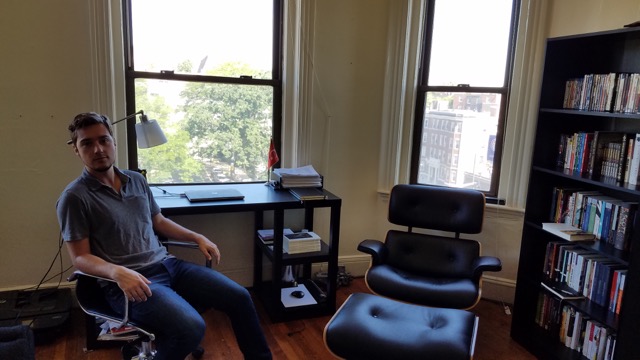 “She promises to call him later and takes off down the street on her rusting bicycle. Askander watches her until she fizzles into the mirage. Fifty kilometers north, the ground is green and irrigated well. On the western side of the river, the grasses are lively and soft compared to the gray and spiny stalks around the town. The fertility of the Euphrates is discontinuous, leprous in its pockets of lush and meager. Askander longs to swim in the North Sea. Any sea. To hold his breath and see how deep he can sink, if only to prove to himself he’s escaped the river.” —from “Amongst the Olive Groves of Mezra” which appears in the Summer 2016 issue (Volume 57, Issue 2).

Oh my, how embarrassing. I didn’t really start writing until near the end of my freshman year in college. I had just finished The Sun Also Rises, and then read as much Hemingway as I could. I’d even enrolled in boxing classes. So naturally I wrote a story about a boxer, but I wanted to be a little different. I so love the role of place in a story, so I set it in 1920’s Shanghai, during what is usually termed the “Warlord Era,” which then grew into the fight between the Communists and the Kuomintang. It, of course, read like very bad Hemingway. Perhaps my first story with my own voice was a piece I did about a French photographer in Mali during the conflict between the government, Tuareg separatists, and Islamists.

This is tough to answer because I have a hard time getting out of my own work. I can say only who I think influences me, which would be Jim Shepard, Michael Ondaatje, James Salter, some of Elif Şafak, some of Orhan Pamuk, and some of Italo Calvino. My favorite is certainly Ondaatje, whom I only started reading at the suggestion of my workshop professor last year. Ondaatje’s The English Patient haunts me. Its language, its research, its story, its construction—all of it so methodically made perfect. It’s one of those stories I wished I’d written, one I will always hold as the gold standard. We never will write as well as our favorite books.

I would have liked to be a photographer. I’m very inspired and influenced by the cinematography of David Lean’s movies, especially Lawrence of Arabia. But of course there are fantastic stories in those movies too, and despite better judgment I don’t think I could help being a writer if I tried, which is perhaps a foolish answer. But I think I am still young and prone to coveting other professions.

What inspired you to write “Amongst the Olive Groves of Mezra”?

With a lot of family over in Turkey, and growing up visiting the country, I’ve always kept a close eye on its current events. Then, of course these awful events in Syria have displaced so many who are seeking refuge in Turkey and elsewhere. On top of that you have the issue of Kurdish sovereignty boiling up in politics again after a relatively quiet period. And I had recently read an article on honor killings in the Middle East, which is such a terrible thing. I thought that people needed to hear these stories, that not enough of these things were being told. And all of that makes for a very interesting backdrop to a story in my opinion, but it all starts from a single image or sentence or notion (for me, at least). I had been reading an article on words and saw that Turkish is the only language with a word for moonlight on the sea as I point out in my story. I suppose everything in this piece was born from the idea of a fisherman comparing this to fireflies. Then came the other snapshots: the checkpoints on the Turkish-Syrian border, the places along the river that are desolate, the clouds of dust from a car speeding in the desert, a woman crying because no one believes her.

A little bit of both. I have a desk positioned in my apartment against bay windows, looking out over an intersection on Commonwealth Avenue. I do most of my writing here, but when I visit my folks, in my old room there is also a desk positioned against bay windows looking out into the forest. While in undergrad I had my desk next to the door to our little balcony. I don’t know what this means, but I find I can’t write unless I’m in a situation like that. So my space doesn’t exactly have to be my apartment desk and windows but those need to be involved, preferably a big desk to sprawl things out and large windows with a commanding view. I grew up in Kansas—perhaps it is the love of open areas. Revision is another thing entirely, and I can do that most anywhere, as long as there is a clipboard.

I’ve gotten pretty good at shuttling manila folders around an office or working a front desk. I’ve been an assistant of this or that in a number of fields, including archival work and hospital administration. But I’ve done the clichés as well, such as the writer/barista. I’ve given tennis lessons. I made a very little money selling my photographs at one time. This was perhaps the best thing for me, the most fun anyway. Working in a darkroom is an incredible experience. I’ve been a student for the last nineteen years. I’m very fortunate that writing is really the only “career” I’ve ever had, everything else being either part-time or academic.

What city or place has influenced your writing?

Lately I would say that there has been a lot of duality, or rather binary, in my stories. I can think of no other culprit than the city of Istanbul. It so often is considered just the dichotomy of East and West, but I think instead that it should be regarded as a “Past vs. Present” situation. There is so much Western and Eastern history in the city but there is just as much Western and Eastern modernity packed into its busy avenues. Istanbul is different things to different people, and it works to fill almost every binary one can try and apply to it. The essence of the city—which I find to be very close to laughing and joking in the face of turmoil—is rich for an artist to pick up and apply to their style. Stories that have humor or fantastical elements mingled with the broodier aspects of life like grief and oppression would do well to observe the flair of the dondurmacı as he peddles his ice cream a few blocks from a brutal act of oppression at the hands of the police, which the journalists can’t write about for fear of going to jail. There is a melancholy in the streets of Istanbul that admittedly may dishearten some but it is an encompassing thing, it is a melancholy to be shared willingly and appreciatively. It makes me feel complete, part of a larger experience, part of the centuries gone by.

I used to be able to pull open a Word document and start writing or pick up where I left off, but that became difficult for whatever reason so I switched to handwriting first. I’d read somewhere that writing things out on a page helps with your brain activity or lucidity or some such thing that probably isn’t true, so I tried it out, and now what I do is wake up, check my email or go for a quick walk, make my coffee and then write about five hundred words in my notebook (which I’ve gotten pretty good at guessing how many pages that will be). Then I type them into the computer immediately after, and this is the first point of revision, where I’m fixing small things, little phrases as I go. Then I take the rest of the day off, running errands, exploring Boston, going to class. After all this, I print out the day’s work, take my clipboard, go to my comfy chair and really get into revision, adding all of these into the computer by the end of the night.

Coffee is my go-to. Depending on how lazy I am that morning I will either make a pot of drip coffee or periodically make cups of Turkish coffee. In the summer I prefer tea from a çaydanlık. For food I don’t think you can beat the occasional mint Milano cookie. I knew a writer who swore by the power of chocolate chips to induce creativity. I gave it a shot once and it worked (or maybe the placebo effect worked) so I swear by it as well, but as good as it is for my writing I don’t find chocolate chips to be a sustainable diet.

I have a very dear friend, an artist in Los Angeles named Aneesa. She gets the first look. She’s read just about everything I’ve written and usually can snuff out what I’m trying to do with my early drafts and isn’t afraid to tell me when something is garbage. I work through many drafts—some stories I have ten or twelve different drafts. I’m not one of those writers that can get it close to perfect early; that method I find to be very slow (though perhaps less wasteful). And poor Aneesa usually ends up reading all the drafts.

Kenan Orhan is a Turkish American writer and MFA candidate at Emerson College. His stories appear or are forthcoming in McNeese Review, Newfound Journal, The Puritan, Cosmonauts Avenue, and others.