I Did Not Want to See That Picture


That picture of the Garissa University massacre which left 148 students strewn across the floor—I did everything in my power not to come across it on Twitter. But that picture, heavy with death and desperation, forced itself on me. Young bodies, partially clothed, now robbed of a future, killed off like rats.

Young students who, the day before that massacre, were thinking about love, about exams, a forthcoming trip, the end-of-the–year party, the latest song by that rap group that is so popular now. Young men and women full of simple, beautiful thoughts. Young men and women who were just like me when I was twenty years old. Then death: brutal, murderous.

Eventually, I did look at that picture, and I found that there was something wrong with it. Something deeply and terribly wrong in my—in our—looking at it. My unexpressed uneasiness took shape (and heart, I might add) after I read the tweet by the Washington Post writer Ishaan Tharoor. Addressing the New Yorker’s Jon Lee Anderson who had tweeted the picture, Tharoor wrote: Would you tweet the images of these bodies if it was in the US?

His tweet generates answers and a debate. The New Yorker writer comes right back and says: If we hadn't seen images of the Holocaust's stacked bodies, even more people would be in denial. But even in the case of the Shoah, I think, much was written about voyeurism, about the gaze (especially aimed at naked women’s bodies) that participated in (and at times was complicit with) the gaze of the Nazi butchers.

It is complicated, I think. I go back to the debate and I see that Ishaan Tharoor is not giving up. The Washington Post journalist admits to playing the devil’s advocate: would you tweet an image of executed kids from Sandy Hook? The scene is the same: dead students.

I still remember Sandy Hook. I remember that massacre on December 14, 2012 in a small town in Connecticut. A twenty-year-old, Adam Lanza, after killing his own mother, entered an elementary school and killed twenty children aged 6 to 7, along with some teachers. Twenty-seven victims. Obama on that occasion said: I know there’s not a parent in America who doesn’t feel the same overwhelming grief that I do.

No one even dreamed of photographing those lifeless bodies desecrated by bullets. And even if someone had done so, the press would have lynched them—and for good reason.

Even after the Charlie Hebdo massacre no one—thank goodness, I would add—got to see the bodies of Cabu, Charb, Tignous and Wolinski riddled with bullets But we did get to see Ahmed, the Muslim policeman, killed by the two terrorists, just like the worst sort of cowboy movie.

I look at the picture of the Garissa University massacre. Didn’t it occur to anyone that the picture might upset the families? Those who had lost a son, a grandchild, a loved one. Didn’t anyone think of them? Of their feelings? Of their grief?

That picture reminds me of a sixteenth-century painting I saw at the Prado Museum in Madrid. Pieter Bruegel the Elder’s Triumph of Death. There too, bodies are strewn across the ground, almost without any identity. Bruegel showed that everyone was the same in death—the king and the poor man sharing the same final destiny. 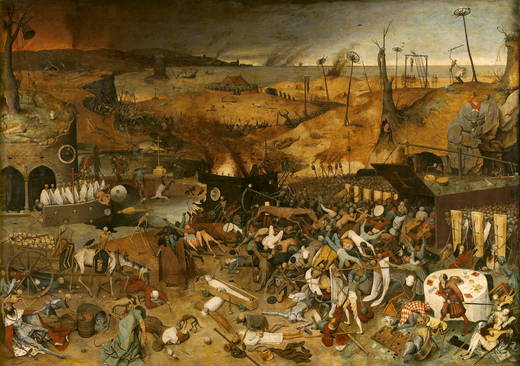 This is the same concept expressed by Italian performer and writer Totò in his famous poem about death being the great leveler that makes you lose your very name along with your life. But I am not sure that the concept of death as the great leveler applies to the body immediately after death. Often this depends on what we were in life or, as in the case of Garissa, on geographical location. Those bodies strewn across the floor were black, they were African, from a poor part of the world.

No privacy for them, only desecration. Had those been white bodies, would we have seen them? I can’t come up with an answer. I am confused, pained. Ishaan Tharoor speaks openly of unequal treatment. Unequal… Could he be right?

In Italy too, people talked about that picture, about those bodies. Paolo Giordano, a writer who won the prestigious Strega Prize for his novel The Solitude of Prime Numbers, wrote in the Milan daily Il Corriere della Sera:

"There is a simple 'exercise' we should perform in front of this picture. We should look at it once again, but in place of the dark skin of those faces pressed against the floor, of those naked chests and arms, in place of them, we should substitute a light complexion, more similar to ours. Is this mere rhetoric?? Is it pathetic? Perhaps it is. And yet, we rarely remember to do so. We are, for the most part, polite, third world advocates, but we still harbor a core of apathy that is incapable of evolving, and it either reasons instinctively or not at all. Changing the skin color of those young men and women strewn in between the chairs and the pools of coagulated blood still somehow changes our reaction."

I understand that his intentions are good. But there is something wrong with his words. As a black Italian I feel excluded from his reasoning, from his “exercise”. I am shocked that he uses a word like “third-world advocates”. I did not know that it was still possible to use such an old-fashioned word that reeks of paternalistic colonialism. The Third World does not exist, it never did. It is only the name that the West gave to the South to exploit it better, to relegate it to a marginal role.

But what I really find chilling is the substitution exercise, the transformation of those bodies, that the writer asks us to make. Transforming those bodies from black to pink, painting them white in order to be able to identify with them.

I know Paolo Giordano is not a racist. But deep inside of him there is something that permeates Italian society, a society that does not really know how to deal with the otherness of bodies or cultures. It is not just a matter of using the wrong words, it’s the attitudes that are wrong. I ask myself: is our common humanity not enough for us to identify with each other? Why change a black body into a white one?

In the article published in the Corriere della Sera, Paolo Giordano also emphasizes another aspect: those were “Christian” bodies. And he's not alone, most of the Western world does the same. Sure, the students were Christians and the Shabaab, the terrorist group based in Somalia, were Muslims. But this does not justify this clash of civilizations. Being of Somali descent and a Muslim myself, I know this well. The Shabaab has been killing Muslim Somalis for years in Somalia and no one ever talks about it.

In fact, the real problem of East Africa is the civil war in Somalia, a war that has been going on for twenty three years and that has caused havoc everywhere, especially in Kenya. Trafficking is rampant in Somalia, but Somalia is also one of the African countries which, along with Nigeria has the largest oil reserves—more than Qatar and Kuwait combined, so it seems.

The very Italian and very African, Seble Woldeghiorghis, who works in City Hall in Milan and who was born of an Eritrean mother and an Ethiopian father, is absolutely right when she comments on Facebook: “I do not want to share the pictures of the corpses of the Garissa students. That is no way to honor the dead. Sharing those pictures signifies aiding and abetting those who massacred them. Instead, we should learn to talk about the African continent, a part of our world,  and of people who deserve more attention and serious study. And not just today."

Igiaba Scego is an Somali Italian writer. Her essay "Riding the Babel on Wheels" was published in MR 55.4. Her English translators, Giovanna Bellesia-Contuzzi and Victoria Poletto, are frequent contributors to MR. The original version of this essay can be found on www.internationale.it.