American Reckoning: The Vietnam War and Our National Identity 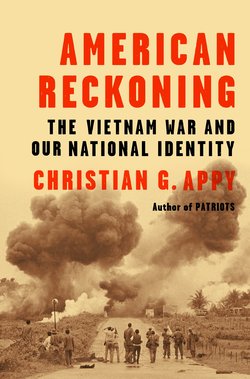 Christian Appy's new book, American Reckoning, is a brilliant and readable synthesis of all previous thinking about the Vietnam War plus deep insights into the inner workings of the powers behind the war, especially what the American people were not privy to at the time. The war had gone sour for LBJ and key members of his administration long before anybody knew about it. The war had become unwinnable but simultaneously unendable.

Appy recounts a moment when Lyndon Johnson, badgered by reporters to explain why we continued to fight a war that was plainly unwinnable, “the president unzipped his fly, drew out his substantial organ, and declared, ‘This is why.’” This was typical of LBJ’s Aristophanic self-expression but it was also a metaphor Freud would have loved—revealing what American power thought of itself and its assumed place in the world. Johnson and his key players thought that a withdrawal from Vietnam would signal weakness to the rest of the world.

Appy is particularly astute about Vietnam Veterans, a demographic still largely misunderstood by the American public. All combat troops, whatever their politics, had the following experience. They were taught to believe that we were fighting a noble war to prevent the innocent South Vietnamese from being overrun by the godless communist hoards from the north. They arrived in country and quickly discovered that the Vietnamese civilians were in on the game. True, many Vietnamese, especially those who remembered the French, merely wanted to be left alone by both sides, but eighty percent of the country was pro-NLF. When Diem, the president we had installed in Saigon realized this, he canceled elections. This structural oversight on the part of the war's architects was responsible for a lot of dead Americans and Vietnamese.

Ground troops were continually walking into ambushes and stepping on mines in close proximity to villages and were quick to assume that the villagers knew about the mines and the enemy presence.  If a farmer walks over the same paddy dike for a week and doesn't step on the mine and then an American does, soldiers and marines assumed the villagers were working for the enemy. Often, they were. In any case, by the time I arrived in Vietnam in 1967 the hostility toward the Vietnamese in general was extreme. The war became a matter of staying alive for American ground troops and any notions of a noble cause had flown. The reprisals against the civilian population were often fierce.

Most of the American servicemen in Vietnam were decent human beings who had inherited their military service identity from their World War II-generation parents, a belief that the US was the world's eternal good guy always doing the right thing and helping out the underdog. We had stopped Tojo and Hitler, after all. The fall from grace of this generation of men was to have devastating consequences. The My Lai massacre brought attention to the problem of civilian casualties and revealed that it wasn't only mass killings like My Lai: the brutal treatment of civilians was a daily occurrence.

The next nightmare was the relocation of entire village populations to large camps called "strategic hamlets," and the chemical defoliation of known enemy sanctuaries that became known as "free fire zones." The affects of these relocations and the chemical spraying destroyed most of the rice crop and mid-war, Vietnam, known for its rice, was having to import it. Appy's tracking of the stages of the continuing disaster is quite convincing: idiocy after idiocy, bungle after bungle, all the way to "Vietnamization" and the ignominious exit of the Americans in 1975.

Appy follows the troops home to their dismal reception. Incidents of returning soldiers being spit on and called baby killers were very rare. What most troops faced was indifference, disgust or embarrassment. In some cases they were literally shunned.  They were not welcomed.  They were further stigmatized as drug addicts and psychopaths.  For a while during the seventies every time a television series needed a psycho they created a character that was a Vietnam veteran.

After the initial shaming of homecoming troops, Ronald Reagan and his administration tried to resuscitate them as victims. The memory of the war had sufficiently subsided enough for veterans to be recast as men who, if they had been allowed to fight the war, if they hadn't been undermined by student protests, would have won. Most veterans rejected both roles—loser or hero—and watched in amazement while they were reconstructed for political purposes.

The American right has been trying to make Vietnam go away for nearly a half century.  The week after the first invasion of Iraq in 1991, George H. W. Bush declared that the "Vietnam Syndrome" was over.  The slick media packaging of the invasion with lots of exploding ordnance was meant to kick off a new era in which the US would be restored to its position as supreme power.  Bush the Second began two wars that were supposed to kick the ball further down field.  In both cases, they failed, and Vietnam, is still very much with us.

The Vietnam War was an opportunity for the US to question and revise its national identity in ways that could have avoided much of the violence that continues now in the Middle East. With the swing toward the right since Reagan it has done the opposite, and the GOP in particular has become downright arterially sclerotic in its insistence that the country be restored to its pre Vietnam idea of itself. That will never happen, and they just continue to dig the grave deeper.

Appy has subsumed most of the previous books—from Michael Herr's Dispatches to Frances Fitzgerald's Fire in the Lake, to Neil Sheehan's A Bright and Shining Lie—into a brilliant analysis of a war doomed from the get-go. He has exhaustively interviewed people, dug around in the Library of Congress, and woven it all into a vigorous and gracefully written argument. Let's hope he finds an audience beyond the well-preached-to choir. A joke-meme is gathering momentum online, sometimes appearing as a cartoon, with the following caption: “Those who do not study history are doomed to repeat it. Those who do study history are doomed to sit around and watch other people repeat it.”

Doug Anderson is the author of the memoir Keep Your Head Down, as well as several collections of poetry, including The Moon Reflected Fire. His poem "Seventy" appears in the current issue of MR.