Yesterday, January 1, 2015, marked the two hundred and eleventh anniversary of Haiti’s independence. In ten more days, January 12, 2015, Haiti, Haitians, and Haiti allies will commemorate the fifth anniversary of the 7.0 Richter scale earthquake that left 316,000 people dead, thousands more injured, and an approximate 1.7 million without shelter. Beyond the bonds of slavery, from which Haitian revolutionaries forcibly removed their chains, and beyond its cost to the newly emancipated nation (perceived as threatening to the plantation systems of neighboring Latin American countries and of the US antebellum South, swiftly leading to its economic crippling as the nation was cut-off from global trade, courtesy of Napoleon’s vanquished France), the earthquake has perhaps been the most singularly devastating moment of its modern-day history. Globally, it was the second most devastating earthquake in the world in terms of human cost, second to the 1556 China earthquake that left 880,000 dead. 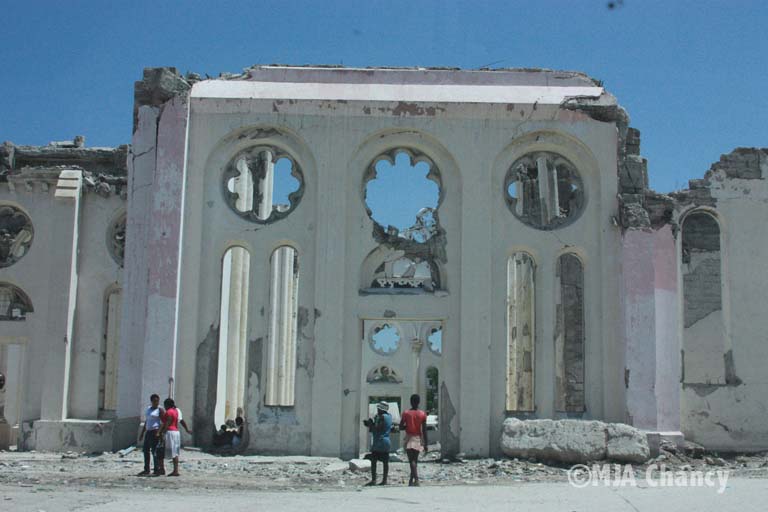 In forty-five seconds, followed by fifty-two aftershocks measuring 4.0 or more in the ensuing twelve days, the country’s best-known historical landmarks, the Presidential Palace, and the imposing Port-au-Prince cathedral, lay in ruins, along with countless churches, markets, and homes from the capital to Léogane (the epicenter of the quake), to parts of Jacmel in the South. Communal markers of national identity evaporated overnight, along with personal ones. Searches attempting to track down the missing were often demoralizing: contacts assumed alive had died, while those disappeared might be found alive. Friends, family, colleagues, disappeared, some never to be heard from again. The first weeks and months after the earthquake were arduous, especially for those, having survived, who had to bury the dead, rebuild their homes, found themselves in Internally Displaced Persons (IDP) camps with little to no services, only to be dispossessed of the little they had a year or two later, with no measurable progress beyond the clearing of the streets of rubble before them. 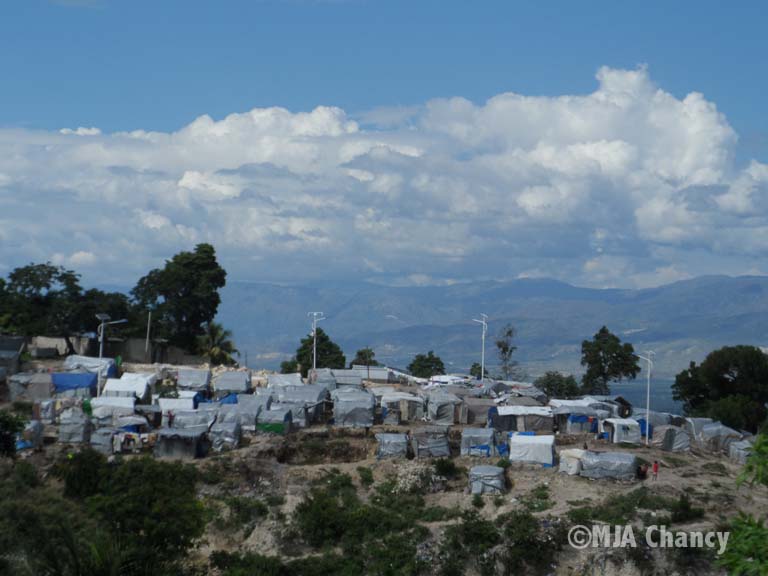 At the end of 2014, the United Nations Development Programme (UNDP) produced an annual report on Haiti, tracking its progress since 2010, and making recommendations for development through 2030. Though UNDP claims that the percentage of Haitians living in abject poverty (measured by an income of less than $1.25 USD per day) has diminished since 2010, it also states that six million of Haiti’s 8.5 million live on less than $2.5 USD per day (which is considered “moderate poverty”). To put these numbers in perspective, consider that prior to the earthquake, Haiti’s per capita income was measured at approximately $1500/year.  After the earthquake, this number dropped to about half that amount; today, five years later, according to the World Bank, the per capita income is barely sixty dollars more, at $810. How are these numbers possible given the outpouring of reconstruction aid barely hours after images of the earthquake circulated globally, from individuals, private entities, and from the international community?

At the beginning of 2015, the news from Haiti is much the same as it was in 2011, 2012, 2013 and 2014: less than 1% of the 412 million international aid dedicated by governments has found its way to Haiti’s government. The Bush & Clinton fund, which received 54 million in donations by 2011 for Haiti, has disbursed barely 3% of that amount, investing mostly in the building of capitalist ventures such as luxury hotels. The list could go on. The lack of disbursement of donated funds is an argument for supporting local grassroots organizations and those working with the grassroots in Haiti, such as Kanpe, founded in part by Dominique Anglade who lost both her parents in the earthquake, and dedicated to the uplift of Haitians out of poverty (www.kanpe.org) and Beverly Bell’s Other Worlds, which argues that “Another Haiti is Possible” (www.otherworldsarepossible.org/support-other-worlds ).

The reconstruction plan for Haiti post-2010 is the same as it was at the end of 2009: tourism and factories. Educational infrastructures, including trades, support for artisans, the development of safe living structures, access to health care and paved roads, are low priorities—unless the latter lead to four-star hotels for the comfort of foreigners. Despite reports that most, if not all of the original IDP camps of 2010 have been dismantled and their populations relocated, the reality is that many non-official IDP camps sprung up as quickly as the official ones were dismantled and, according to the UNDP report, 62% of the population lives in vast sub-standard housing, while 40% of Haiti’s working population is unemployed. The numbers don’t lie: something is terribly wrong in 2015 Haiti. What is terribly wrong is that what made the 2010 earthquake a tragedy—the inattention and vast economic exploitation that already mired Haiti’s general population, making of Port-au-Prince, a city built for 250,000, an engorged metropolis of over four million people with already woefully inadequate living conditions, overlooked (except when a cheap labor force was necessary) by the global community—remains the status quo. 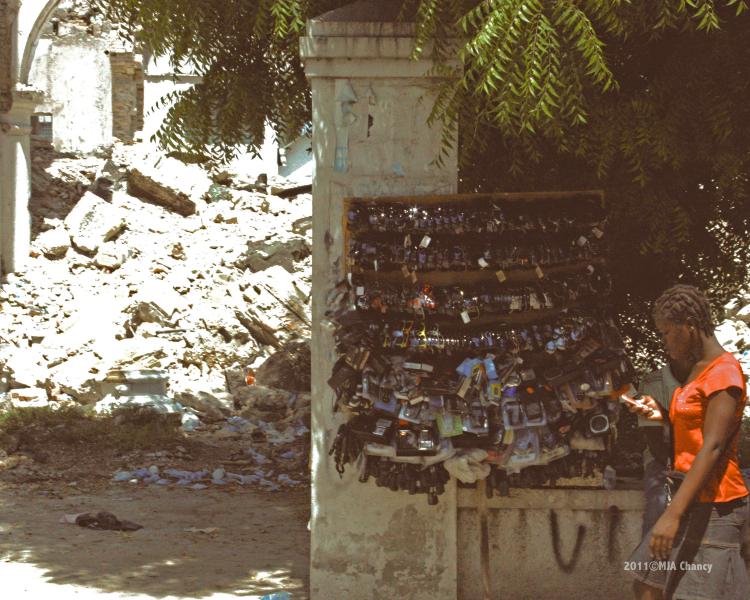 The Cathedral fell, taking with it the market place that had sprung at its feet over decades, a market replaced by an IDP camp, from which emerged young women begging with small babies a year after the earthquake, babies that may or may not have been the product of the sexual violence that permeated the camps in those first months of mayhem and lack of organization when women and children were especially vulnerable, as they are everywhere in the world where a home is a piece of cloth without a lock. Women became leaders in some of the camps, creating their own security systems along with young men who dared to call themselves feminists in a country that does not support the independence of women despite its heralding of the second sex as “poto-mitans” or center posts, a country in which, as in many others, women do most of the toiling and child-rearing. Despite the scarcity of potable water, I watched women commit themselves to the washing of clothes on Mondays in the camp once sprawling over the Champs de Mars, across from the fallen parliament buildings: dignity has no price and cannot fall among the ruins.  And I watched the living go on, co-existing with the dead and fallen: a young woman, transfixed by the small screen of her cell phone, like young women everywhere, a cell phone that fashionably matched the red of her shirt, walking by a street vendor with his board of sunglasses, battery packs, and other sundries, hitched to a wall, while next to him a vast emptiness opened up, a pile of rubble blanched by the sun.  Here, the past, even if ruined, becomes a pastiche for the future. It is there, not forgotten, but made do, because only the present can matter when all has crumbled and the future is uncertain.

January 12, 2015, Haitians will commemorate that which has been lost.  They will also remember and celebrate, in light of the latest Independence Day, the 300,000 lives that graced this earth, even if they were taken away by force, even if many of their names will never be recovered. 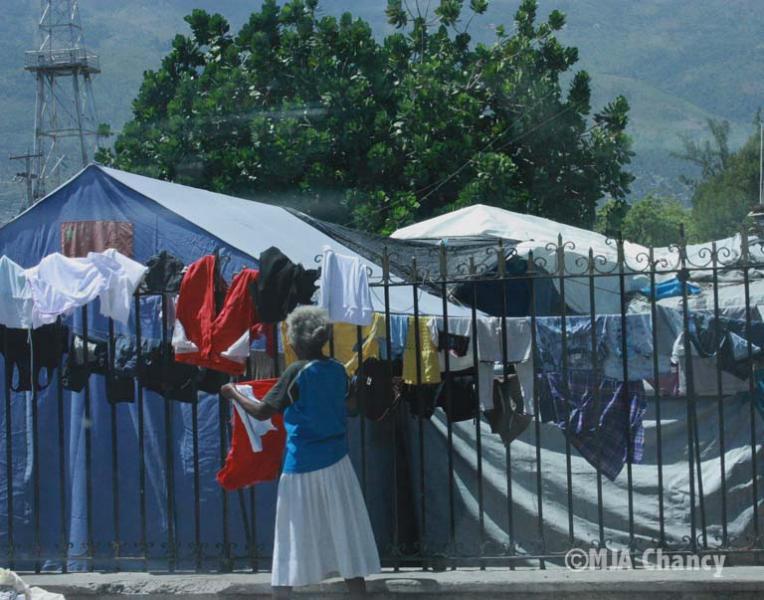 For those of us who will never be able to show our children the Cathedral as it was (there are plans to rebuild it with a futuristic, modern design), the Palace (now torn down), or the places of our first sacraments (churches, family homes), wiped out in a fateful and unexpected 45 seconds, rather than owing to the slow accretion of time which makes all change much easier to trace, it will be a moment to weigh the wages of Haiti’s hard-won freedom. If anything, it will be a day to put in motion one last hope: that by remembering the ravages of the earthquake and the history that made it so savage an occurrence, that each of us, and as a collective, will commit ourselves to a world in which the exploitation of the poor and of their resources (whether by extraction of the natural resources beneath their feet, or of the labor of their bodies), will no longer be something we tolerate as if, like an earthquake, it were a natural occurrence. We can prevent a “douze” (what some Haitians locally call the quake) from having the devastating effect it had in Haiti in 2010; we can commit ourselves to understanding the role of global economics on small places, and commit ourselves to supporting the dignity of individuals in such places; we can follow the repetitious and earnest movement of that woman with the greying hair, whose life was reduced to a tent on the Champ-de-Mars, who likely knows nothing of global trade, but who slowly, patiently, hangs her wash on the fence penning her and other displaced into the square, because there will be a tomorrow, and it, like the spirit, must be faced in clean clothes.

Myriam J. A. Chancy is a Haitian-Canadian writer, Guggenheim Fellow, and Professor of Africana Studies at the University of Cincinnati. An excerpt from her forthcoming novel, Douze, will be featured in MR's Spring issue.