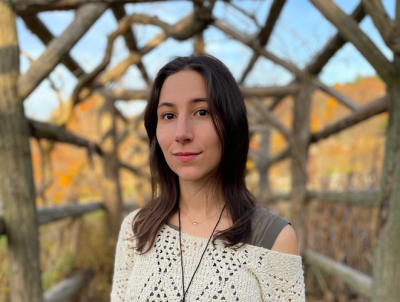 I like to play with animals, to see
what their bodies do when twisted
and probed. I like the sounds they make.
I grab a toad by the throat and move it
into an O as in Open wide, love.
—from "The Chimp Speaks of Cruelty," Volume 62, Issue 2 (Summer 2021)

Tell us about one of the first pieces you wrote.
When I first started writing poems in college, the process overtook me. It was like I had denied myself a serious go at this form of expression, and when I finally allowed it, I filled notebooks, was kept up at night, distracted, needed to write like it was a tic. Some of that early work is in University of Michigan lit journal online archives.

One early influence in particular was poet Scott Beal’s class through U of M's Lloyd Hall Scholars Program (now Lloyd Hall Scholars for Writing and the Arts). The class was called Poetry, Magic, and Science, and we analyzed poems that were written through the lens of magic spells, mythologies, and rituals, and others written with a background in research, math, and the sciences. Some of my first poems take inspiration from Albert Goldbarth's "Qebehsenuef," named after the Egyptian protector of the intestines. The speaker of the poem incants, drawing on and weaving in myth, as his mother dies on a hospital bed. Another work that inspired an early poem is Marianne Boruch’s book Cadaver, Speak in which the speaker shadows med students as they prod cadavers. The poem grants subjectivity to the violated cadaver.

The class taught me a very important lesson as an early writer: to take inspiration from everywhere, and to use the impersonal to transform the personal.

What writer(s) or works have influenced the way you write now?
Both prose and poetry inspire my verse. Linked and thematic short story collections like Denis Johnson's Jesus' Son and Ottessa Moshfegh's Homesick for Another World, respectively, as well as formally groundbreaking novels like Joan Didion's Play It as It Lays have had as much influence on my poetry as Marie Howe's Magdalene, Louise Glück's Averno, the collected poems of Jack Gilbert, and a steady diet of modernists. As a child, I loved disturbing MG and YA novels. Some favorites were Jerry Spinelli’s Loser and Wringer, Markus Zusak’s I Am The Messenger, Tatiana de Rosnay’s Sarah’s Key, and in adolescence, Kindred by Octavia Butler.

I was also greatly influenced by my MFA professors and cohort at UNC-Greensboro, whose advice, much like stray salient lines from those writers mentioned above, sound in my head. When I see the end of my poem published with The Massachusetts Review, I think about Johnson's turn at the end of "Car Crash While Hitchhiking": "And you, you ridiculous people, you expect me to help you.” I also think of Eliot’s “You! hypocrite lecteur!—mon semblable,—mon frère!” I don’t always immediately know a poem’s influences or deliberately incorporate them into my work. I’ve spent so much time immersed in literature that most of my influences have created subtle instincts.

What inspired you to write this piece?
I’ve been working on a series of poems about mental health through the lens of animals that I began during my MFA. I found animals cropping up throughout my poems, so under the advisement of my professor Emilia Phillips, I dug deeper into that instinct and began researching facts about bears, sloths, chimps, etc. I found videos and stories online of chimps at zoos sexually assaulting frogs in the mouth, which is a scene in the poem. I have also read, reread, and absolutely loved Karen Joy Fowler's novel We Are All Completely Beside Ourselves, which is about a girl raised alongside a chimp named Fern. In one scene, Fern kills a kitten against a tree and opens it up "like a purse." It was one of the only violent actions by Fern, a humanlike and usually gentle creature. In the book, the speaker, Fern’s human sister, tells it quickly and with some distance, colored by indignity and regret.

I wanted to explore the brutal act outside its context, from a firsthand perspective, and from the persona of the same chimp at the zoo as in the other example. I wanted to attribute to the chimp’s thoughts a stripped-down sense of selfishness and curiosity—potentially lacking theory of mind and the thought that the action causes suffering. I wanted a poem that looks without shame, that peers into the mind rather than steps away from the glass. Later Fern is caged with other animals in a lab—another violence, but with a layer of denial and appearances. For the pursuit of science, and human curiosity—again, speciesist and lacking empathy, not for evil’s sake itself, but cruel nonetheless. I wanted to explore this darker side of human nature through metaphor so that it’s shocking as a mirror but not for the sake of shock value. To make a point and to reveal a truth, which is an adequate purpose of poetry if there is one. How far is too far, and how far would you go, if pushed? What evils are you perpetrating and pretending not to, or perpetrating blindly? The mother sees the chimp's violence and, regardless if through amusement, bemusement, discomfort, or a combination of all three, she laughs.

I also believe that I had recently read Marge Piercy’s poem “To be of use” while writing “The Chimp Speaks of Cruelty” because I loved the lines: “Hopi vases that held corn, are put in museums / but you know they were made to be used. / The pitcher cries for water to carry / and a person for work that is real.” I remember thinking that the phrase “made to be used” could connote a darker tone in a different context.

Is there a city or place, real or imagined, that influences your writing?
Most of my life I’ve lived where the winters get really cold, so domestic spaces influence my work since I spend all that time inside. I've traveled and written through it, but for the most part I've found the idiom true: wherever you go, there you are. I'm still learning to use the natural environment and the history of a region to inform my work. Whenever I try, I find myself so much more intrigued by emotion that I skimp on description.

I'm grateful to know my weaknesses, and I know that I'm working toward improving at writing external imagery because I'm able to appreciate that element of craft more than I have in the past. Look at this closing image from Glück's “The Wild Iris”: "from the center of my life came / a great fountain, deep blue / shadows on azure seawater." When handled with deft, the external and internal together are more profound than either alone.

Is there any specific music that aids you through the writing or editing process?
I listen to a lot of angsty and emo bands, softer indie rock, and some outlier genres. Some favorite albums are Titus Andronicus's The Monitor, Bomb the Music Industry's Vacation, Prince Daddy and the Hyena's I Thought You Didn't Even Like Leaving, and some of my favorite discographies are those of Adrienne Lenker, Bright Eyes, Rilo Kiley, TV Girl, Elvis Depressedly, Modest Mouse, Yo La Tengo, and many, many more. I recently got into the album volcanic bird enemy and the voiced concern by Lil Ugly Mane. Music has always been very important to me, and it's what got me interested in poetry in the first place. To me, the two are inseparable, and listening to music is part of the writing process.

Do you have any rituals or traditions that you do in order to write?
During train rides, and almost any time I’m in transit, I feel the urge to write. I don’t drive much but when I do I seem to want to pull over to write. I composed a poem in my head while on the back of a motorcycle, which kind of ruined the ride because I wanted to get off and type. I don't like to force myself to write, but prompts can pull me out of a slump, especially when I'm with a group and we're each working off of the same one.

Who typically gets the first read of your work?
The 24 gets the first look at all my poems. It's an email thread with some other poets—Chessy Normile, Julia Edwards, Jeffrey McDaniel, and Rhoni Blankenhorn. Every time I write a new poem, I post the first draft in there. The rule began as: every 24 hours you have to post something, and during the pandemic in 2020 we were all religious about it. Lately we’ve been emailing with drafts a few times a week. If I want to pursue one of those drafts, I usually bring it to a workshop with poets Julia Edwards and Emily Cinquemani.

If you could work in another art form what would it be?
If I had a talent for instruments or singing, I would've been in bands since high school. As a hobby when I have enough space and don't live in the city, I want to make sets of plates, mugs, etc. with scalloping, delicate painted details, and a natural wonky quality, and to use them as basic dishware. I like the idea of decorating our lives with the tools we use.

What are you working on currently?
I have a debut manuscript ready and a chapbook version of it. I’m trying to get it published without spending hundreds on long-shot contests, so we’ll see if that pans out, eventually. I’m also working on new poems as I write them; no set project in mind for them save a second book.

What are you reading right now?
I recently finished Elif Batuman’s The Idiot and Either/Or, Nabokov’s Laughter in the Dark, and Denis Johnson’s The Name of the World, which I serendipitously found on the street. I also just read Jeffrey McDaniel’s Thin Ice Olympics and was pleased to recognize in it poems from The 24. I ordered a copy of Meg Freitag’s Edith, which is a collection of poems about a late pet parakeet, and the ones I’ve read online from the book are fantastic—casual yet romantic, funny yet heartfelt, plain spoken yet poetic—but BOAAT Press informed me that it’s out of stock, and the press is believed defunct. I did reach out and buy it from the author directly, so I’m hoping to have it in my hands soon.

CLAIRE DENSON’s writing appears in The Cincinatti Review, The Massachusetts Review, Salt Hill Journal, The Florida Review, and the minnesota review, among others. Her poems have been anthologized in Peach Mag, BOOTH, and Best of Versification, nominated for Best of the Net and Best New Poets, and featured in Literary Hub. While studying, Claire interned at Foundry Literary + Media agency in NYC, tutored at 826Michigan, and earned a BA with High Distinction from the University of Michigan in Ann Arbor. She holds an MFA from the University of North Carolina at Greensboro where she taught English courses, consulted in the University Writing Center, and worked on The Greensboro Review. Claire now works for The Adroit Journal and Atmosphere Press and lives in Brooklyn, NY.