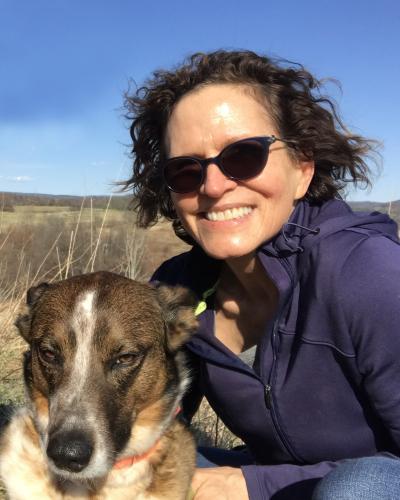 “When Natasha began having sex with Jimmy Walczyk, I became an ocean swimmer. With goggles and a towel I’d walk to Will Rogers Beach and, jumping in at Lifeguard Stand 18, swim a mile north to the rock jetty below the Palisades cliffs—which was danger. I wanted connectivity to that danger; I craved the raw magnificent terror of waves tugging me toward the rocks. Who doesn’t? Jesus nuts and the brain dead.”
—from “Tidal,” Volume 63, Issue 2 (Summer 2022)

Tell us about one of the first pieces you wrote.
A short story when I was five (maybe it was seven sentences long?) about a hornworm. I have no recollection of the story but I’m sure it was inspired by Eric Carle’s caterpillar. Likely I plagiarized as I’m positive Herman (my worm) emerged from a cocoon because who can resist that ending?

What writer(s) or works have influenced the way you write now?
Lily King, Karen Russell, Alice Munro, Danielle Evans, Natasha Trethewey, Mary Oliver, Phillis Wheatley. I’m forever trying to capture place as Tolstoy does—how he creates connection between his characters and setting. I thought a lot about that in “Tidal”—the ocean as my narrator’s safe space (until it isn’t). I’m in awe of Toni Morrison’s genius. Her ability to render emotion on the page is stunning.

What other professions have you worked in?
I was an actor for many years but was a total embarrassment at auditions (just the memory of it makes me cringe). I will receive a SAG pension—go UNION! I also designed and manufactured women’s and children’s clothing, using recycled materials. It was a wonderfully creative process until a wily bookkeeper raided the books like a raccoon in a chicken coop—and that was that. Is motherhood a profession? I’ve collected numerous awards in my career as a mom.

What inspired you to write this piece?
While “Tidal” is fictional, there are aspects to it that are drawn from my time growing up in the Santa Monica Canyon and going to Will Rogers Beach, watching the kids who were popular hanging out. While they were having sex, I was busy writing and pretending I loved being alone.

Is there a city or place, real or imagined, that influences your writing?
I’m a bit compulsive about Southern California, particularly the beaches and the San Fernando Valley. Most of my short stories take place somewhere in California, though I am currently working on a novel set in upstate New York, where I presently live. As a So Cal native, I’ve become obsessed with seasons and how nature does nature. Pretty damned amazing.

Is there any specific music that aids you through the writing or editing process?
Beethoven, Leonard Cohen, Nirvana, Kendrick Lamar, Billie Eilish, Jacqueline du Pre, red-winged blackbirds, Carolina wrens, tufted titmice — I could go on and on.

Do you have any rituals or traditions that you do in order to write?
I whistle for the shitbird and wait until it alights on my shoulder, clears its throat and really starts to sing.

If you could work in another art form what would it be?
I would love to be a painter—in oils. I wish I had talent like Sanam Khatibi or Tschabalala Self or Kerry James Marshall. Oh yes. I dream of painting. And color.

What are you working on currently?
A short story about a religious family where things have gone terribly awry, set in Northridge where every street looks the same and the asphalt bubbles in the summer heat. I’m on my zillionth draft of a novel set in fictional Chipping, New York and am in the beginning stages of a novel about a bankrupt clothing designer who is obsessed with Albrecht Dürer.

What are you reading right now?
The Book of Delights by Ross Gay, Idaho by Emily Ruskovich, The Insect Crisis by Oliver Milman, and Laila Lalami’s Conditional Citizens.

ANAMYN TUROWSKI was born and raised in Santa Monica, CA and now resides on a farm in upstate New York. Her stories have appeared in december, New Ohio Review, Fugue, Terrain.org, among others. She has received two Pushcart nominations and was a recent fiction judge for Millay Arts. She’s a graduate of Bennington’s Writing Seminars.