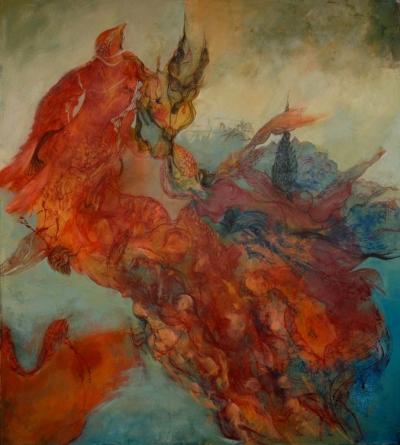 Kevork Mourad. By kind permission from the artist.

One of the most significant and exciting developments of 2019 and 2020 in the American theatre has been the formation of the Middle Eastern and North African Theatre Makers Alliance (MENATMA). Years of creating, organizing, theorizing, and advocating have culminated in an American Middle Eastern and North African theatre movement that amplifies MENA voices and strengthens BIPOC (Black, Indigenous, People of Color) theatre makers.

It is a movement to which we ascribe enormous ambition and hope; we will be politically and aesthetically progressive, elevate historical consciousness, and fight for justice long denied. We will do so as storytellers who toil in the medium of theatre, in all its live and digital forms. We will do so as the progeny of cultures and communities about which we deeply care. We will do so as activists who confront racism, marginalization, and erasure.

But first we give credit where credit is due. MENATMA stands on the shoulders of the African American, Asian American, Indigenous, and Latinx theatre movements that started before us and continue full-force. The blueprints these movements bequeathed us reveal an abundance of wisdom, vision, integrity, and courage. Our gratitude is boundless. As we too design social architecture, we do so coalitionally, mindful that our commitments intersect well beyond theatre, and that MENA-identified people exist in all BIPOC communities.

Which begs some semantical housecleaning. All of us in the American Middle Eastern and North African theatre movement know that “Middle East” and “Middle Eastern” (as well as “Near East” and “Near Eastern”) are problematic terms. They’re rooted in colonial cartography and place England at the center of the world! Yet we’ve resigned ourselves to the fact that, for now, “Middle East” is widely understood, whereas the geographically appropriate term, “Southwest Asia” (or “West Asia”), is not.

Some of us have at times argued, myself included, that by reclaiming “Middle East,” by aligning the term with indigeneity, pluralism, and cultural agency, we deal a rhetorical blow to its colonial connotations. The problem is, that argument falls short. “Middle East” is the ghost of 1916’s Sykes-Picot Agreement, England and France’s treacherous redrawing of the region’s borders. It keeps us fractured and weak. Ours is a movement of connectedness, of collective power, of being linked and not ranked. If we commit to a practice of territorial renaming, iterate “Southwest Asia” every chance we get, swap MENA for SWANA, eventually it will stick.

In declaring ourselves to be “Southwest Asian Americans,” we reject imperial naming rights, decolonize the language, and get to name ourselves for once. But what if SWANA isn’t enough? A cultural geographer friend of mine often cites a mentor of his who described “the Middle East” as stretching from Morocco to Kazakhstan. A sweeping assertion, no doubt, but one worth considering. Assuming some validity to the mentor’s claim, do we then include Central Asia in our acronym, as we do with North Africa? Does cultural and geographic “proximity” prescribe a (soft “C”) CASWANA consciousness instead, a coalition that could include the Uighurs of Xinjiang? A compelling case can be made.

And while we’re upending convention, why not disrupt the increasingly false binary of “diaspora” and “homeland?” We in the American Southwest Asian and North African (SWANA) theatre movement know all too well that exile and rootedness are not mutually exclusive. What does it matter if we create art primarily in the United States? Our art is inherently transnational. Which is why “here” and “there” fail to convey our psychic, spiritual, and physical experiences of community and belonging.

“Diaspora” and “homeland” fail to account for third-culture outcomes of transnational existence. Period. The idea that place and practice must be neatly aligned is ludicrous. The Global Arab and Global Arabness are alive and well. In the assimilationist jargon of immigrant experiences, “heritage” and “place of origin” imply past-tense, that which was left behind. Yet within our American SWANA theatre communities, nothing could be further from the truth. For us, “heritage” acts like a verb, it coalesces past, present, and future. Accusations of “split loyalty” be damned. We are loyal to our art.

And our art is unabashedly political, even when it is avowedly “non-political.” Artmaking begets political responsibility. Art and activism, art and neuroplasticity, are all inextricably linked. There is no art for art’s sake. Good political art is never dogmatic, preachy, or propagandistic, it is simply art that poses the hard questions, art that dramatizes discursive arguments and conjures perspectives seldom, if ever, heard.

Seeking the permission, approval, and acceptance of white cultural arbiters is futile and soul-crushing. There is no need to “humanize” ourselves. We are already human! Syncing our creative energies to news cycles about Jihadi terrorists and then theatricalizing a repudiation and apology is not our cross to bear. We create art to learn about ourselves, not to provide assurances as to who we are not. We create art to help communities evolve, not assuage people’s irrational fears.

For an American SWANA theatre movement to succeed, it must be radically and intentionally inclusive. That includes people of mixed heritage and people whose SWANA roots may have been cut off or denied at some point. As the adage goes, our diversity is our strength! Efforts to conflate and homogenize SWANA peoples must be resisted. We’re neither monolithically Arab nor monolithically Muslim.

Instead, we honor our differences, we name our specificities, we celebrate our particularisms, but we never lose sight of the ties that bind. We share the contiguous histories of contiguous lands. Our cultures are adjacent and intersecting. Hollywood conflates “Middle Easterners” as indistinguishable and unfathomable in part to advance Western imperialism. From genies in a bottle to maniacal terrorists, we have never been allowed to represent and distinguish ourselves.

We are Arabs, Aramaens (Assyrians, Chaldeans, and Syriacs), Armenians, Circassians, Copts, Imazighen, Jews, Kurds, Persians, Roma, and Turks (apologies for unintended omissions). Between us exist dozens of languages and hundreds of dialects. Our religious landscapes include multiple interpretations of Judaism, Christianity, and Islam, Bahaism, Druzism, Mandaeism, Yazidism, and Zoroastrianism. All are Southwest Asian religions, some were later “universalized.” We are a mosaic, not a melting pot, and the mosaic is stunning.

Yet, as committed as I am to the SWANA collective, I admit, with a certain lament, that it did eclipse earlier dreams of a specifically Arab American theatre movement. The geo-regional trumped the ethno-cultural, wisely and strategically, but with gains come losses. Arguably, the Arab American community is my first home, and it is important for me to establish that SWANA, as an organizing principle, does not replace or negate our specifically Arab efforts. Or our specifically Iranian or Mizrahi/Sephardic or Turkish efforts. It all co-exists within adjacent and complementary spheres.

Which segues to why our unity matters. An American SWANA theatre movement is uniquely positioned to address the complicated relationships within and between our respective communities: the inherited traumas and present-day injustices that render collaboration “impossible” in the eyes of our naysayers. The fact that MENATMA exists, in all its cultural and religious diversity, the fact of our togetherness, bears witness to the belief that a house divided can heal and that theatre makers are a radical vanguard.

Where there is legitimate grievance and enmity, global SWANA theatre artists are compelled to mine stories of reconciliation and redress. Principles of reparative justice and restorative justice must inform our storytelling. There was an Armenian Genocide. Colonial powers ripped our nations apart. Palestinians were forcibly expelled from their homes. How now do we build toward justice? Theatre is a space for naming, acknowledging, atoning, and forgiving, for conjuring entirely new ways of relating to each other.

In an America decimated by neoliberal cruelty and divisiveness, MENATMA models reconstructive politics through our unity and our art. The critical interventions go beyond the SWANA limits. No degree of cosmopolitanism can excuse or omit our participation in America’s get white quick schemes. Our family trees may or may not include American slavery and its resultant civil war, but the majority of us benefit from not being Black.

The US Census Bureau pegs SWANA peoples as “white.” For those of who cannot “pass” as white, it is white without the privilege. Islamophobia, anti-immigrant hostility, and colorism all see to that. Those of us who do “pass” as white can be arbitrarily penalized for marks of foreignness or undesirability. White adjacency is always tentative. Truth be told, “Black and white” never really accounted for SWANA peoples. Which is why earlier waves of SWANA immigrants fought and won legal battles to essentially “become white.” Or at least a quasi-tenable approximation of white.

But entry into the white club demanded proof of anti-Blackness, and all too many of us were happy to oblige, with wild abandon. If we are to declare ourselves today part of the BIPOC coalition, we need to grapple with that history and its past and present manifestations. Fortunately, many in our movement are doing precisely that: self-examining, asking the difficult questions, uncovering the painful artifacts, interrogating our purported “progressiveness,” building anti-racist alliances, strategizing ways forward, and refusing to center ourselves in the quest for racial justice.

By definition, American SWANA theatre is anti-racist theatre. It’s feminist theatre. It’s queer theatre. It’s anti-colonial theatre. It’s theatre that connects our SWANA communities to our broader Asian and African communities, our Black, Indigenous, and Latinx communities, and our European and white communities. It must also be a theatre in which Afro-SWANA voices are acknowledged, amplified and heard and in which mixed heritage experiences are honored and embraced. Today’s great migration is from white supremacy to multi-racial democracy. Our storytelling advances that forward motion.

Inevitably, the emergence of a Middle Eastern and North African Theatre Makers Alliance anticipates a future in which the MENATMAs (and SWANATMAs) of the world become obsolete. A long way to go before we get there, absolutely, but our endgame should be one of dissolution. Not dissolution of our identities and communities, those will forever evolve and transform. But dissolution of the idea that the right of representation, that very fundamental human right, is one that some communities must fight for and other communities simply own.

That day may arrive in twenty years, it may arrive in two hundred years, but the paradigm will shift. Understanding the power of representation, or the ways in which representation shapes destiny, is no longer sufficient. We are beyond awakening. We must now own and control the means of our representation. Or, to paraphrase Gandhi, we must be the representation we want to see. Not because we’ve turned the tables or gained the upper hand, but because the systems that support storytelling will have become democratic and widely diffuse. In no small part because of our work. It is then that the American SWANA theatre movement will have changed the American story.

A PDF of this essay is available here.

Jamil Khoury is the Co-Founder and Co-Executive Artistic Director of Silk Road Rising. He is a theatre producer, playwright, essayist, and filmmaker.