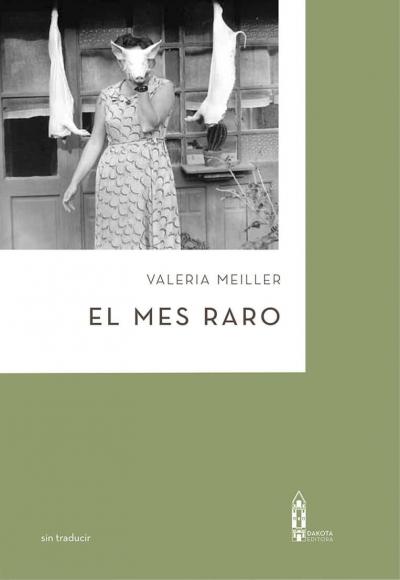 The living room is crowned by a painting, one that has no purpose other than to take precedence over the armchairs. In the scene there are two deer, grazing on a sparse, dry plain: everything is yellow, from the animals to the meadow to a shadeless sky at high noon. There is something steppe-like about the painting that could have easily led to Africa but, in this moment, only reminds them of yet another hunting scene.
—from "The Odd Month," Volume 63, Issue 1 (Spring 2022)

Tell us about one of the first pieces you translated.
The very first translation project I attempted I took on out of pure academic necessity: I was taking a graduate seminar in Latin American poetry & I had to present to the class about Norah Lange, an Argentine poet & the only known woman of the historical avant-garde movement known as Ultraísmo. My Spanish at that point was still quite basic &, in order to prepare a halfway decent presentation, I knew that I would need to translate a large portion of Norah’s work into English if I was going to understand—and talk coherently about—the aesthetic intervention she made in her male-dominated cultural context. I started with Norah’s first collection of poems, La calle de la tarde (1925), for which Borges, an early mentor of Lange’s, wrote one of his many prologues: characteristically enigmatic & near impossible to render in English. Moving between the spare, raw intensity of Lange & the intricate rhythms of Borges, I found myself quite enamored by working with these two distinct voices. (I would argue La calle de la tarde, in fact, writes against Borges’s gendered ultraísta precepts; later, Lange published a piece where she explicitly declares herself independent of his influence.)

I found translation to be creative yet without the burden of original (outright) creation, as well as a healthy outlet for my own neuroses & perfectionist tendencies: there’s no “right” answer in translation, but there are wrong ones, as well as “solutions” that are better than others. Translation turned out to be a bit like problem-solving for me: identifying & then choosing among a variety of possible options based on extremely subtle differences—& individual preferences, idiosyncrasies & interpretations. I enjoyed the preliminary exercise so much that I translated the entirety of La calle de la tarde as my final project for the course. The following term, I continued revising the manuscript under the guidance of Norma Klahn, my professor. She encouraged me to reach out to Susana Lange, Norah’s literary executor, with whom I began a lovely & memorable correspondence & who I was fortunate enough to meet—almost by chance—at a book festival in Madrid, at an event celebrating Norah’s work. Susana granted me permission to publish my work & several of the translations work appeared in The Acentos Review.

What other professions have you worked in?
I’ve been a theatre usher, a server, a hostess, a barista. Lousy at all of them.

What did you want to be when you were young?
An archaeologist. I like to work with my hands, and I like to work with fragments. One summer in high school, I attended two introductory classes at UCLA, one in archeology and one in poetry writing. In the end, they didn’t turn out to be all that different from one another. I was absolutely spell-bound by the ways archaeology asked me to derive narratives from the material shards of the lives of people born centuries, millennia, ago. Poetry performs a similar operation, but in reverse: it involves arranging shards of language in such a way as to imply—and often critique—narrative(s). It moves my hands, too, along the lines of the page, across a notebook or keyboard or mouse. And of course: poetry, like archeology, entails an ongoing dialogue with the dead. To end up, as I have, writing a doctoral dissertation on documentary poetry—a type of writing that emphasizes material culture and history’s fragments—seems to me almost like splitting the difference.

What drew you to write a translation of this piece in particular?
I met Valeria in the summer of 2018, when we both attended the Cornell School in Criticism and Theory. We were both part of a very special group of friends—many of us Latin Americanists—that formed, in large part, around watching the World Cup in the basement of a bar near campus called Rulloff’s. Valeria and I were the only women, and, both poets, we became fast friends. When our time in Ithaca came to an end, she sent me her latest collection, El mes raro.

El mes raro is a collection of 29 prose poems—what I’ve come to call “ecopoetic vignettes”—that inserts itself into the Argentine rural literary tradition & reflects on the ways the once-idealized landscape has been transformed by climate change. Known colloquially as “the odd month” as much for its unusual number of days as for the quotidian state of exception it engenders, February in the rural Argentine imaginary has historically represented an auspicious time: the only month without rain, in which that season’s crops are gathered, celebrated, tallied & accounted for. With each passing year, however, unusual patterns continue to upend communal expectations & timeworn practices of manipulating nature in the name of economic productivity. Yet, if on the one hand there is the law—of the family, of religion, of animal domestication, of trickle-down economics—attempting to produce order through different systematizations of the natural, on the other is the way in which animal & plant life put these laws into crisis & resist being inscribed in human cultural practices: the tension between these opposing “forces” sustains the collection. And it does so in part by constructing a complex timescape that alternates between historic specificity (the book revolves around a horrific drought that struck Argentina in 2008-9) & the archetypal (the drought figured as a climate crisis of biblical proportions).

As I read through the collection, I kept coming back to one piece in particular. It’s called “The Animal.” I couldn’t figure out how to render a particular image in English: in the Spanish, the line reads “Bajo la luz de las linternas, el cuero se abre con la feroci­dad de un brote.” [Literally, beneath the lantern light, the hide splits open with the ferocity of a seed sprouting.] After identifying many possible versions of this line, & much hemming & hawing, I went with “Under lantern light, the hide splits open ferociously, as a shoot ruptures seed.” I was unsure whether I had taken too many liberties: with the insertion of commas, by turning an adjectival phrase into a simile, adding in the verb “ruptures.” So, with much trepidation, I showed four preliminary translations to Valeria. Luckily, she was very moved by my work. So I kept going.

The particular selection that appears in The Massachusetts Review—"Africa," "East," "The Country House," "To the Boy, This Morning" & "Her Birthday"—follows the character of “the boy” through the rural Argentine landscape. This character is part of the way the book performs a symbolic investigation of quotidian violence during “the odd month” of February. The motif of inheritance—& inherited multigenerational, colonial violence—subtly calls attention to the reproduction & reification of ruling class discourses of “progress” in the “Global South.” Elsewhere in the book, the boy’s violent impulses underscore the movements of (dis)figuration of the bodies upon which contemporary life, racial capitalism & heteropatriarchy depend.

Is there any specific music that aids you through the writing or editing process?
When it comes to translation, I work in total silence. Or, from another perspective, in the presence of the music in the piece I’m working with. As someone originally trained in writing poetry, rhythm forms a cornerstone of my process. Whether the original text is in poetry or prose, I am constantly running through its cadences in my head, and sometimes out loud. Mexico City, where I live, is never really silent, though. In fact, Mexico is so full of sounds the government operates an entire cultural center, the Fonoteca nacional, which takes as its charge “the research, recording, conservation and dissemination of Mexico’s patrimonio sonoro.” So, often time my work is . . . accompanied, shall we say, by «Se compran colchones», the shrill—and, at times, extremely disconcerting—whistle of the camotero, the incessant honking of “PAN!” cart, the clanging of the trash truck bell as it fades into the distance, & other sounds you only know if you know.

Who typically gets the first read of your work?
Valeria or Gabriela Ramirez-Chavez, another Spanish-speaking poet-translator with whom I have been collaborating for a few years.

If you could work in another art form what would it be?
Sculpture: rhythm rendered material.

WHITNEY DEVOS is a writer, translator, and scholar specializing in hemispheric American literatures. She is the translator of Notes Toward a Pamphlet by Sergio Chej­fec and The Semblable by Chantal Maillard, and co-translator of Carlos Soto Román’s 11 and Hugo García Manríquez’s Commonplace / Lo común, both forthcoming. Her translations of Valeria Meiller have also appeared in AzonaL, Chicago Review, Denver Quarterly, ISLE: Interdisciplinary Studies in Literature and Environment, as well as in Columbia Journal, where a selection was awarded the spring 2021 prize in translation.