A Time for Prophets 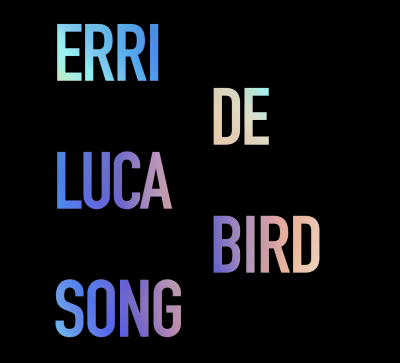 Christmas came a couple of weeks early at our house. During the first week of December, I received an email from Alfredo Jaar, the Chilean-born artist and photographer, recipient of Guggenheim and MacArthur fellowships and last year’s winner of the Hasselblad Award. Along with his countless, large-scale public installations, over the years Jaar has also designed a small number of limited-edition artist books, works that have featured essays by John Cage, Pier Paolo Pasolini, and Jean-Luc Godard. The latest in this series is an essay commissioned from Erri De Luca, and the honor of translation fell to me. Like nearly everything over the past two years, this project had faced obstacles and delays, but at last its time had come. The message from Alfredo was simple: “We’ve got the books and they look great!” It was also perfectly timed: in a week, I was leaving for Italy, so I could take Erri’s copies with me on the plane.

Given the subject of the essay, the timing felt perfect for other reasons too. Erri’s essay is a lovesong to the young—“a bridge generation, one that casts itself above and beyond the current, not against it, in order to reach the edge of a new humanity”—as well as an intervention into the climate crisis. It is a clarion call that finds salvation, as he puts it, “in the hands of despair.” With the Mass Review’s own milestone collection on this subject, the issue of our time, also coming out in a matter of days, the stars were indeed aligning.

As a gift, then, to our readers, I thought I would share with you today some pages from the essay, screenshots that capture the beauty of its design as well as the inspirational content of its message. Though I’ve been translating De Luca’s work for over a decade now (three novels and many other essays, poems, and short stories), Jaar’s design made me see it anew—and this after all is, as Shklovsky recognized, the essential task of art. Simply by alternating between two font sizes, one more than four times larger than the other, Jaar guides readers, encouraging them to slow down, to savour De Luca’s aphoristic sentences one at a time, to ruminate over their significance, chewing their cud as Nietzsche taught us.

The essay’s opening, thus, offers an emblem of this very practice: 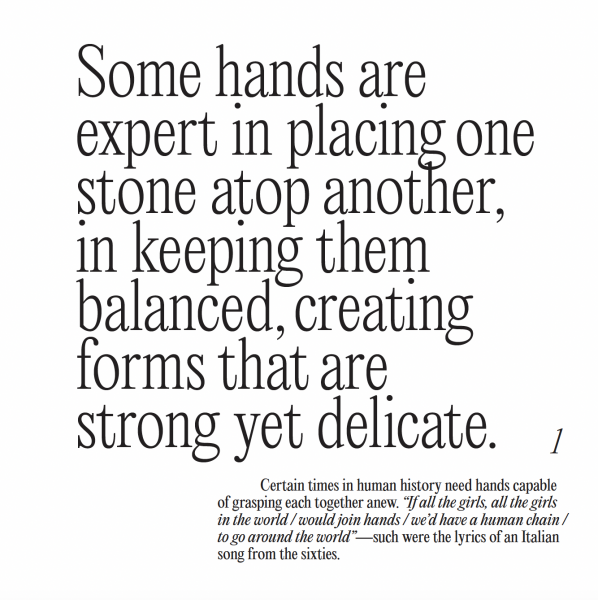 Though one might wonder about those sappy sixties song lyrics (and, I confess, also their translation—the curse of a translator is to see room for revision after the hard copies arrive… I now ask myself, why be “faithful” to repetition in the Italian if it doesn’t sing in English, why not end with “that circles round the globe”?), the key here is clearly the opening image, which will return a few pages later: 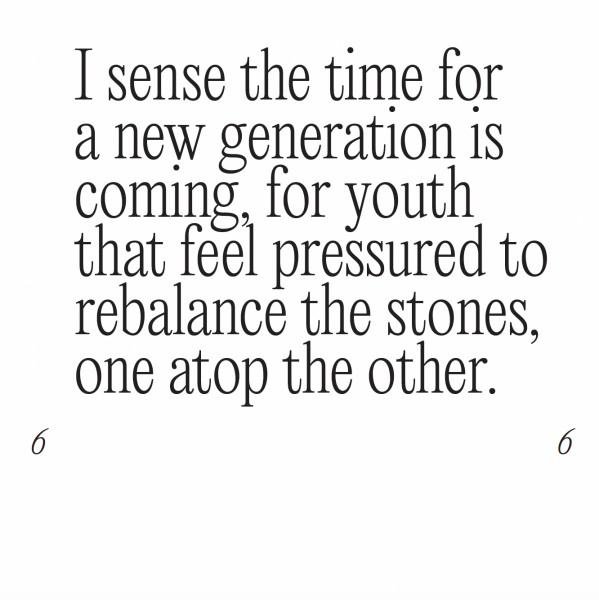 On the following page, however, De Luca swerves, offering an illustration from Virgil and a lesson from the world we’ve allowed to exist: 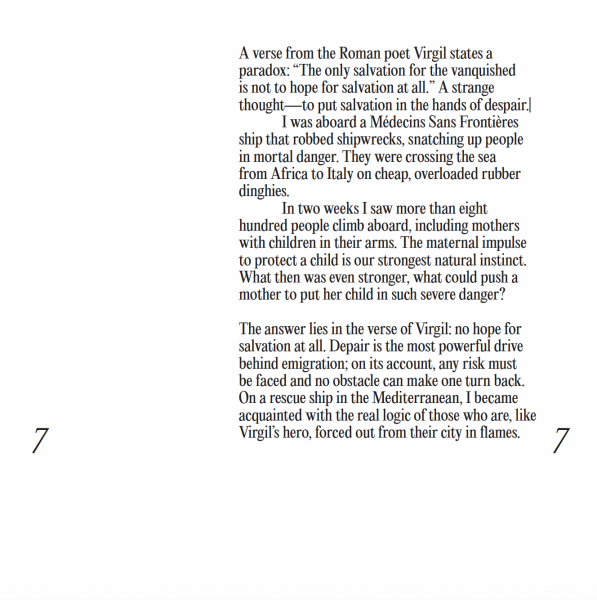 In this case, however, the application of Virgil’s lesson and logic falls to us all, since when the planet itself burns, what cities will be left untouched? Thoughout these pages, De Luca divides the consciousness and commitment of the young from the actions of those today in power. On the one hand, the youth: 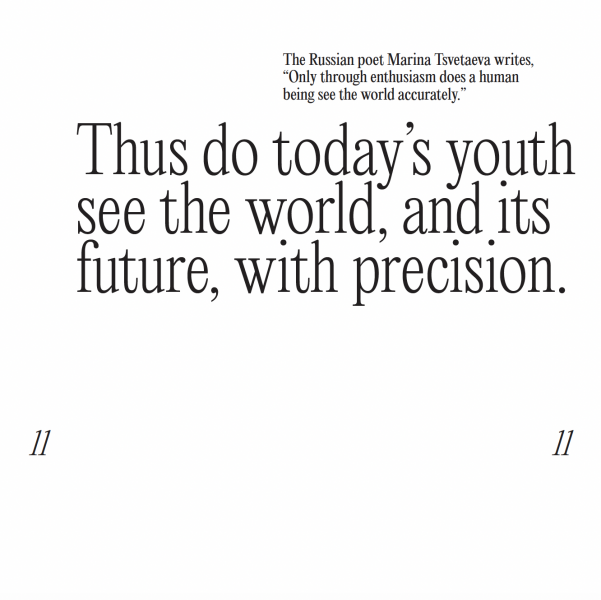 And on the other, the ruling class: 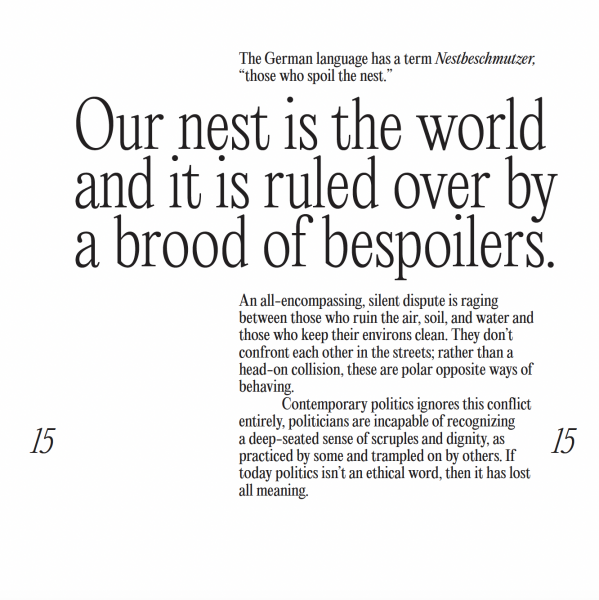 As metaphorical frame, and lyrical launching pad, De Luca offers an anecdote from the life of Rosa Luxemburg: 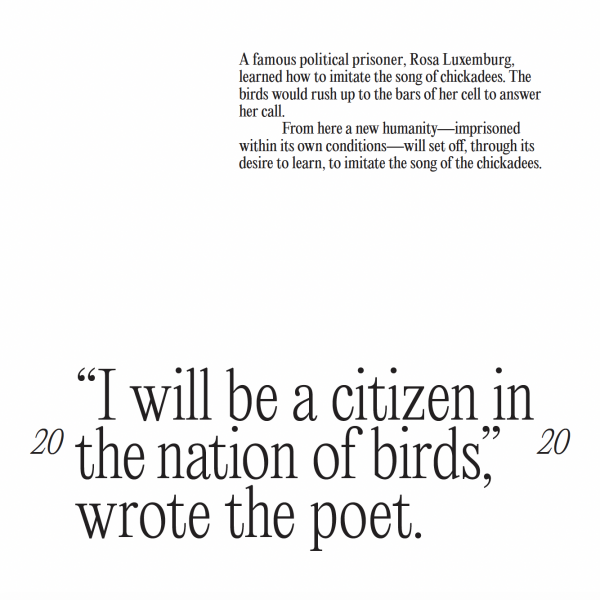 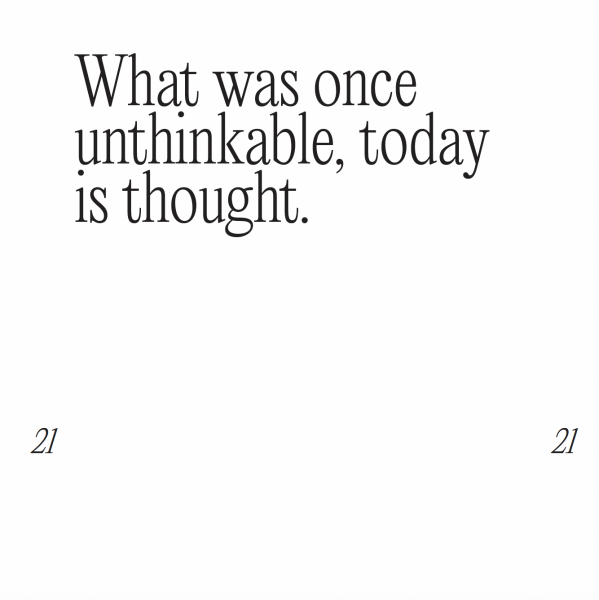 “The best definition I ever encountered of what it meant to be a storyteller in a human society,” Lopez writes, his voice echoing off the page, “is a translation of . . . the Inuktitut word for storyteller: isumataq. It means: the person who creates the atmosphere in which wisdom reveals itself.” Lopez’s avowed hope, as a writer in nature, was that in connecting “the interior landscape of the individual mind together with the shared exterior landscape of the physical earth, it is possible to create a useful and enduring pattern of factual or emotional truth.”

Whether, like Luxemburg, we must learn the song of birds, or like Lopez, we enter into a mind-meld with the planet itself, it seems certain that our nests can never be cleaned up without a revolutionary rethinking that leaves more narrow definitions of humanity behind.

De Luca is under no illusions about the prospects for such change, and he believes the new generation is just as sanguine, yet no less determined for all that: 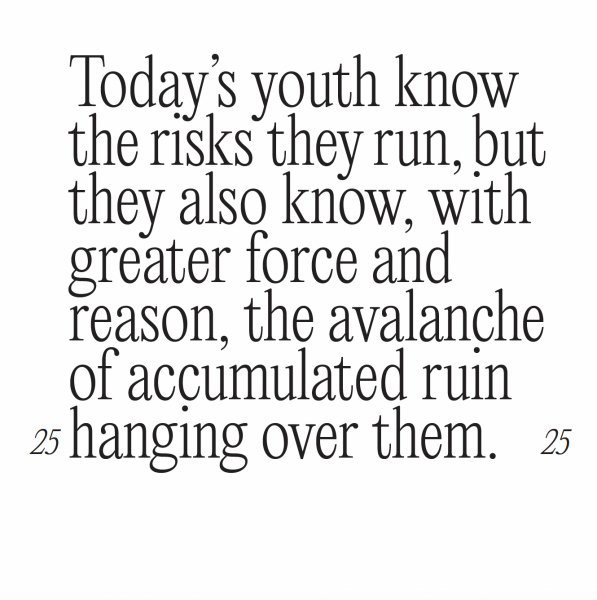 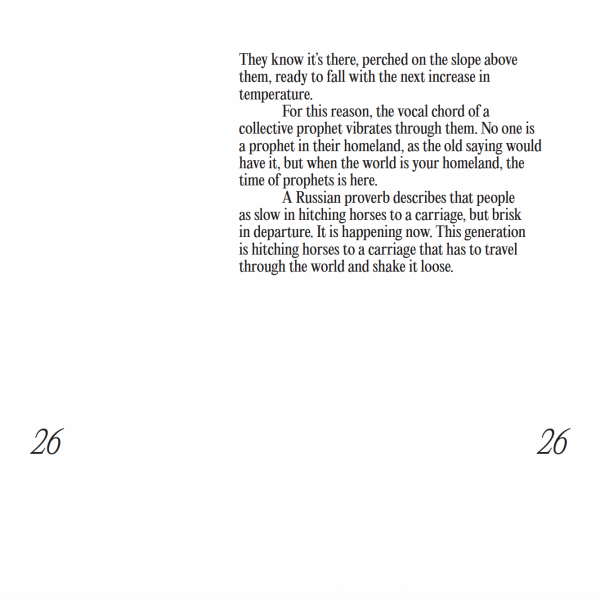 Before leaving for Italy, I mailed a copy of the chapbook to the other great Chilean-born artist that I happen to know, at least virtually—Ariel Dorfman. He wrote back immediately, saying that he found the chapbook “so moving and eloquent, weaving like the sailboat [Erri] loves and suggests is a way to navigate the future,” with “such love for the young.” Dorfman also noted and celebrated the declension of writers woven together by the essay. In closing, then, I’ll leave you with one more glimpse of De Luca’s literary tapestry: 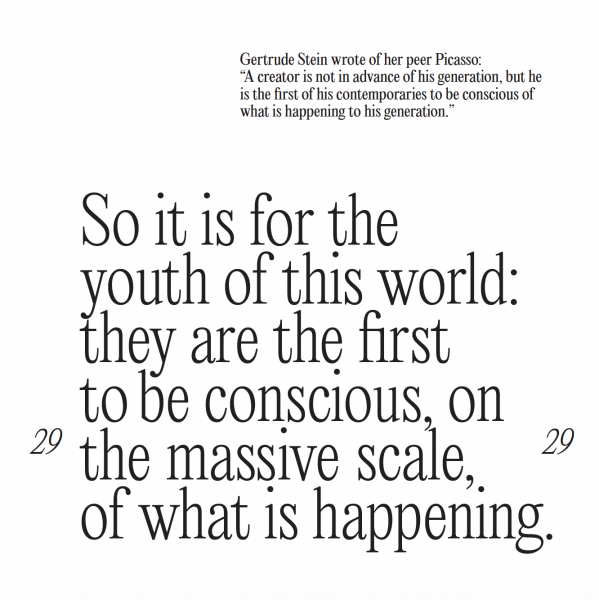 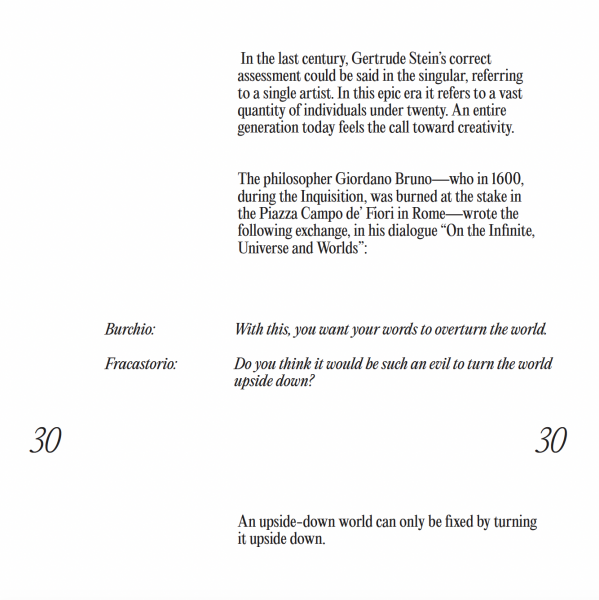 Surely the youth of today must feel, pace Hamlet, not just the times, but the world itself to be out of joint. Unlike Hamlet, however, they have no time to waste in bitterness or lamentation.

Their carriage, which just left from Santiago, must travel through the world and shake it loose.

JIm Hicks is Executive Editor of the Massachusetts Review.