The Challenge of Book History 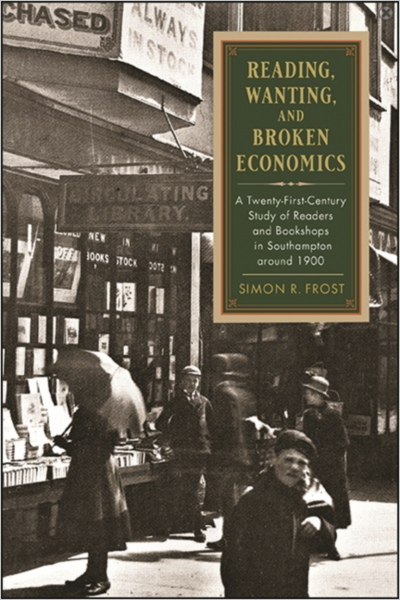 A Review of Simon Frost’s Reading, Wanting, and Broken Economics: A Twenty-First-Century Study of Readers and Bookshops in Southampton around 1900 (State University of New York Press, 2021).

Studies in the field of book history hold a perverse fascination for me. I can never approach them solely as an academic, for the novelist in me begins to chirp in too. This is inevitable. As M. M. Bakhtin stressed, the novel is essentially chirographic, and, despite the side alleys of serialisation, one can argue that the novel owes its current dominance inevitably to the coming of the mass-produced and mass-marketed book. On the other hand, as a novelist, I spend anywhere between two to five years working on the draft of a novel. I am no slowpoke in this regard. It took J. D. Salinger a decade to write Catcher in the Rye. Marcel Proust is said to have written his far more voluminous In Search of Lost Time between 1909 and 1922. The point is this, if novels – and “literary” texts in general – are only a matter of the materiality of their production, which seems to especially enthuse book historians, then why do people like me waste so much time producing a poem, story, or novel? There is no denying the materiality of literature – publishing and marketing, libraries, bookshops, publicity, etc. – and yet the novelist in me remains partly dissatisfied with that focus. And inevitably fascinated by it too.

And so I approached Simon R. Frost’s Reading, Wanting, and Broken Economics: A Twenty-First-Century Study of Readers and Bookshops in Southampton around 1900 with a combination of fascination and a premonition of partial dissatisfaction. This study is lucidly written and thoroughly researched, and it focuses on commodity culture and book retail in the port of Southampton, England, around 1900. Frost’s purpose, through a combination of history, theory, and experimental fiction, is to use this space and period as a case study to trace how “symbolic goods” were created “between other readers and texts, in happy disobedience to the neoliberal laws of the free market.”

There are roughly three sections, though the contents purport four parts: a first section of theory, wherein various opening positions are established; a middle section, where history and background is given for day-to-day book retail and reading in Southampton at the turn of the century, and which a series of fictionalised accounts of reader’s experiences concludes; then a final section on new implications for theory that might be drawn were we to consider all our experiences with books in the way Frost describes – following his points of departure, observing what was happening, and assessing what we can derive from those observations.

The devil, however, lies in the details, or in this case in the quietly demonic application of detail to disrupt what may be too comfortable assumptions. And the details provided are copious, across nearly four hundred pages, both of theory from an impressive and sometimes dizzying range of disciplines, and of historical empirical data. There are detailed records, and even Address Point maps at decade intervals, outlining the changing bookshop businesses on the High Street, as well as who bought and read what, and how. There are microhistories of family shops (Gilbert’s is the central case study – a shop that continued trading until 2002) that help explain market differentiation and the development of customer tastes, as well as why shop owners with an appetite for gambling and inadequate insurance might conflagrate their premisses (the tale of Chaplin and Weeks is particularly entertaining), leaving certain types of stock to flood the High Street. The study explains scales of economy and structures of pricing, wholesaling and publishers’ “reps,” and how all this meant that certain books were stocked, and bought, and others not. It worries, almost obsessively, over the effects of shelf-space strategy, what was known as the “nightmare of overstocking,” and how conflicting interests between shop owners and selling staff might determine which title eventually left the shop with a satisfied reader. But it also looks at conventions around and responses to debt, credit, and theft that ran in tandem with ideas of class and imperialism, which in turn determined a customer’s reading identities – and here the non-mention of Stuart Hall seems one of the study’s few desideratum. Larger forces, too, such as industrial unrest (Southampton’s “Great Strike” like every other city’s great strike, so brutally formative but now barely a memory) are considered, alongside the emigration and colonialization that framed book-buying behaviours; and above all the possible or probable ways in which books were consumed, valued, and read.

The assumptions Frost contests, which are similar to those cushioning my wariness of his project, are ones that insist on policing a separation between values we usually like to defend as literary against those of the market. Not that Frost is in awe of the market. Quite the opposite – the entire volume culminates in a sustained attack on neoliberalism’s tactical use of economics, and economism’s reduction of life to economic indices. On the contrary, the cumulative effect of the volume’s detail is to suggest that “the market” is at bottom a cultural phenomenon, shot through historically by class, colonialism, and chauvinism, to the extent that neutral rational choice models underpinning economics cannot possibly hope to describe it. As he writes of the port city’s medieval trade in Genoese wines and contemporary trade in Chinese game consoles, culture has never been the city’s superstructural add-on: “Culture is its trade.” Kipling and Conrad were sold from the High Street where the body of David Livingston was processed and where readers bought the best imports from the Hindoostani tea company; young women servants fetching the master’s book purchases also took time to browse emigration ads for South America, or read Mary MacLane while dreaming of lesbian freedoms in Canada. Congalese Milbeya, an against-the-grain lover of Tennyson having read the poet in the Frederick Douglass’s Paper, and one of the book’s five fictional readers based on historical evidence, is clear that, despite promise of pecuniary impartiality, his coins will not buy him the same “goods” as they do for other shoppers with a different skin colour.

The market for books in Southampton at the birth of commodity culture, as Frost is at pains to make clear, like the market of symbolic goods now, functions not in spite of cultural life, but because if it. Which brings the study to its central criticism of economic modelling per se. If a central term to economics, such as “consumption,” fails to capture how readers extract value from symbolic goods in a way that a term such as “reading” can, then does not that model lose some of its eminence, and its desire to be separately policed, in favour of something else? It is a slippery term, at best, but what Frost calls for is not a reinforced stand-off between cultural politics and economics, but the reinvention of the field as a whole into a political economy where race, class, and gender matter in the business of buying and selling books and much else.

Quite where this leaves me as someone who, against economic prescription, wastes far too much time producing a poem or novel in the hope of getting it published into the book market I’m not sure. I do this for cultural reasons, let us say. Or as Frost might say, I do this to reach a market that a purely economic model cannot describe, which leaves me wondering what other markets the model is confused by. Perhaps we should be thinking, in the same way that one talks of different “economies of scale,” about different “economies of duration,” to account for writing and writers, like Stendhal, who knew that they were not writing for “the market” in any traditional sense. What Frost does say, and this is where the “wanting” of the title comes in, if our wanting is driven by aspiration – in “Rita”, the second visitor to Gilbert’s bookshop, a young woman with a love of emigration narratives, says “you can’t use a word like Shenandoah in Southampton” –  and that same wanting drives the market, then in what ways can the two be meaningfully separate?

Since its emergence in the 1990s (from earlier French roots), Euro-American book history always seemed to be oddly placed. It meant different things to the various disciplines of history, bibliography, literary studies, and so on – an unsettled state that never began to be resolved until it started referring to itself as an interdiscipline around the middle of the first decade on this millennium. To literary scholars who came across it, book history appeared (unfairly) to provide little more than an add-on, reminding us that the text’s signs were also materials with a price, public, and publishing apparatus. With some success, nevertheless, book history expanded the scope of what was properly considered the object of research to literary studies, including very much the text [the book] as a material transnational phenomenon. Claire Squires could inform us famously that marketing was the major component in the making of literature in an age of global corporate publishing; as part of a transatlantic trade, Leah Price could reveal the polyvalent uses of books beyond their reading; international collaborations such as the Modernist Journals project made re-accessible the role of Europe and America’s little magazines [i.e. the project digitised and discussed Forum, Blast, Atlantic Monthly, etc.] in creating and shaping literary modernism; and it was in this sense of disciplinary expansion, in the 2010s, that book history’s approach to reading studies came to the fore.

In more recent years, the “interdiscipline” has undertaken some self-reflection in an effort at decolonising its past, by addressing its maleness, whiteness, and class, as all disciplines rightly need to do. Headway continues to be made in considering the extent to which the literary field might be an effect of straight white male middlebrow cultural capital: to my mind, as I suggest earlier in this review, this does not in any way explain away all of “literature,” but it is definitely needed to explain the “literary field.” Occasionally, for example in work by Sarah Brouillette (or the recent issue of Post45, “Ecologies of Neo-Liberal Publishing”), ideology, too, makes a welcome return as a component of literary production and reception. But although earlier book history included economic features as signs that expanded the literary field, and even earlier 1970s Marxist criticism addressed economics as an ideological interruption that essentially needed to be expunged, both forms of engagement with economics preserved the literary as a primary field in need of protection or expansion. No book history, and very little literary study, as far as I am aware, has marshalled its interdisciplinary knowledge into an arsenal designed to take on an outside discipline; to criticise, not economic encroachment, but the validity of economics itself. It is in this light that Frost’s study is particularly significant in the fields of book history and literary studies.

Squires, Claire. Marketing Literature. The Making of Contemporary Writing in Britain (Palgrave, 2007).
Price, Leah. How to Do Things with Books in Victorian Britain (Princeton UP, 2012).
Brouilette, Sarah. Literature and the Creative Economy (Stanford UP, 2014).

Tabish Khair is a Contributing Editor of the Massachusetts Review and Associate Professor of English at the University of Aarhus, Denmark. His latest publications include The New Xenophobia (Oxford UP, 2016), How to Fight Islamic Terror from the Missionary Position and Just Another Jihadi Jane (Interlink Books, 2014, 2016), Night of Happiness (Picador, 2018) and Quarantined Sonnets (Kitaab, 2020).