Last Summer of the City 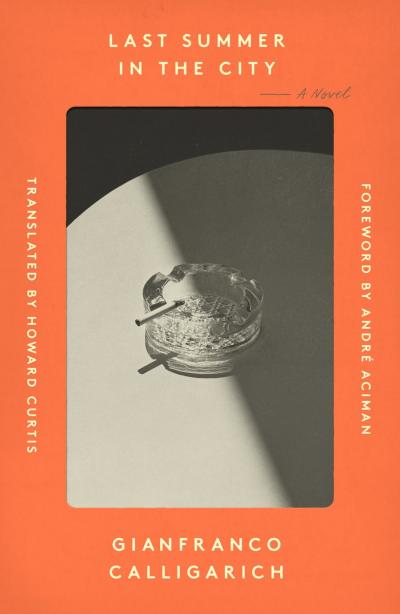 Is there a more fertile experience for literary aspirants than to be poor in a great city? Every generation of young would-be novelists searches for their own version of the Lost Generation’s Left Bank in Paris, and a few are lucky enough to find it. Around the year 1970, a young Milanese journalist named Gianfranco Calligarich came to Rome on an assignment for a Milanese newspaper. After his assignment ended, he decided to stay in the city rather than return to Milan, and one product of this decision was a novel, L'ultima estate in città, which was published in 1973, when Calligarich was 26. The novel became a minor literary sensation when it came out, but the waves it made never reached the U.S., and the book went out of print in Italy until 2010. Now nearly fifty years later, this debut novel by a promising young writer is being published in English for the first time; Calligarich, incidentally, turns 75 this year.

Last Summer in the City is narrated from the point of view of Leo Gazzara, a young writer from Milan who comes to Rome to write for a literary journal. In the novel’s opening pages, the journal runs out of money (we are past the Dolce Vita years of the postwar economic boom), and Leo is free to pursue a life of (necessarily penurious) literary dilettantism. He spends his days reading novels, wakes up in the late morning in the apartments of various young women, and only occasionally turns up for work in the afternoons at a sports journal that pays him enough to scrape by month to month in return for intermittently transcribing audio reports of soccer matches.

At dinner at a friend’s house one evening he meets a young architecture student named Arianna who gives him “a smile that isolated the person it was addressed to, raising him to heights he never would have suspected he could conquer.” There are signs that she is bad news: flighty, conceited, brittle, but never mind that, Leo is drafted into accompanying Arianna home that evening, and after the party ends they go on a drive together that turns into a Roman Holiday-ish jaunt around the eternal city. She’s beautiful and has a copy of Swann’s Way in her backseat; could a sensitive, literary young man ask for anything more?

Calligarich’s novel is deftly written and proceeds briskly. It is best when it takes its time lingering on images of Rome, which abound in the novel’s evocative first several pages. As the literary journal that Leo works at crumbles and its owner is forced to sell furniture to stay afloat financially, Leo and his boss find themselves “surrounded by walls that bore lighter patches where the furniture had been removed.” Making his way through a spring rainstorm, Leo watches as “torrents of water hammered down on the decapitated statues of the forum, the collapsed columns, the palaces in the paved squares, the desolate afternoon arenas, the ornate churches, and, absurdly, the overflowing fountains.” Just as many inhabitants of Italy are never far from the sea, in this novel, one is never far from a striking portrait of Rome in the early seventies, and Calligarich/Gazzara’s observations are splendid, beautiful, and sometimes startling: “the square was overrun with parked cars, and a single beam of sunlight, high in the sky, made the terraces of the Pincio shimmer.”

Nor are the piazzas empty. Calligarich handles his cast of characters, which is relatively large for a novel as slim as this one, like a well-practiced host marshaling his guests through a series of introductions (first names only), stepping in with an incisive characterization here and there: There’s Renzo, with “his Piedmontese tact,” the outspoken, knowing Viola, the Falstaffian Graziano, whose “small and decalcified” teeth, “made him look like a poor man still, in spite of his two-hundred-thousand-lire clothes.” Like any good host, Calligarich mostly lets his characters speak for themselves, revealing an excellent ear for dialogue, and Leo’s conversations with his various friends and acquaintances in the city feel like they were transcribed right there at the cafe table.

In its time-capsule quality, in how clearly various characters in this novel are modeled after real life personages—with Calligarich jotting down as much as he could remember, the book resembles Hemingway’s A Moveable Feast—with memories of the Great War switched out for the long shadow of the Second World War. “We were born just when beautiful old Europe was fine-tuning its most lucid, thorough, and definitive suicide attempt,” one character opines. “Who were our parents? People who slaughtered one another on the battlefields of countries that no longer existed, that’s who they were.”

But it seems that F. Scott Fitzgerald served as Calligarich’s greatest literary influence. This novel has largely Fitzgeraldian sensibilities and themes (artistic authenticity against the corrupting influence of money), with the same restrained literary finesse in its sentences (not lost in Howard Curtis’s fine translation). Arianna is, like Rosalind Connage in This Side of Paradise, a Zelda-ishly difficult creature and something of a striver, and Leo Gazzara’s insightful, understated observations would have made him an apt understudy for Nick Carraway. The parallels are less than coincidental; Calligarich wears his influences on his sleeve: among the beloved books that Leo keeps with him in his flat is his “cheap edition of Gatsby, yellowed, but still intact,” and this is shelved beside his volumes of “old Hem”—referring, of course, to Ernest.

At times, the dialogue between Leo and Arianna crackles with wit, flirtation, and feeling, with Arianna challenging Leo to literary duels that keep both on their toes. “When would you like to have been born?” she asks him, towards the tail end of a conversation about Proust and nostalgia. “Vienna before the end of the empire,” he responds without hesitation. “Me, in Combray,” she retorts. A self-set-up if there ever was one, but Leo wasn’t the only who smiled when she said this. At other times, one has the sense that Leo and Arianna are being pushed apart for the sake of the plot, Calligarich leaning on cliché to move his story along. “Listen,” Leo tells Arianna one evening, “I think I’m in love with you.” “Please don’t say that!” is her anguished reply. I found myself turning the pages less to find what would happen next between the two would-be lovers, than to relish the series of images the novel provides.

In spite of this, I loved this book’s freshness—Rome often feels as if it’s being seen for the first time—its youthful vulnerability, its strokes of precocious wisdom and large-heartedness.  Only one flaw is hard to overlook: the book’s conclusion is disappointing at best and a cheat at worst, not because the love story ends poorly, but because it ends so senselessly. I would say it almost works, if not for Calligarich’s wantonly cruel final pages —crueler than I can express here, and an utterly unnecessary way to cap his achievement. It’s true that heartbreak is the stuff of youth, but looking back, it is warm days, seemingly endless nights, evening strolls through streets, alleys, and piazzas that seem the truth about what it is to be young. In a race against lost time, it’s these moments we are gladdest to have preserved. Calligarich’s achievement is to have written it all down while the memories were still fresh.

JOHN GU grew up in Texas and currently lives in Guadalajara, Mexico. His writing has appeared in The Southern Review, The Chicago Review of Books, and Five on the Fifth magazine. He can be found online at https://johngu.io.