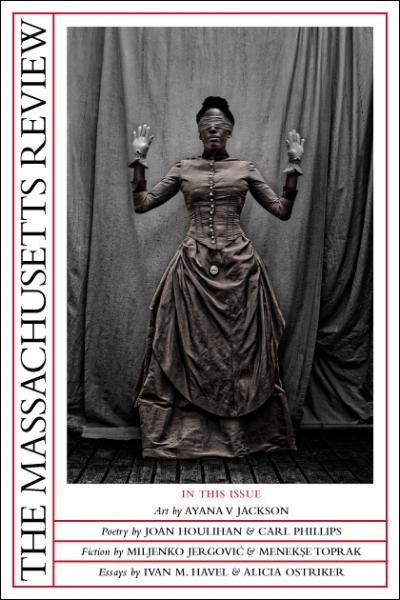 Front cover:
Ayana V Jackson
He Who Is as if Death Were Not 2016
ARCHIVAL PIGMENT PRINT ON GERMAN ETCHING PAPER
Courtesy of the artist and Gallery MOMO,
Johannesburg, RSA

Introduction
THESE DAYS the streets of Rome fill with rubbish, more
or less daily. At times its present makes one wonder
whether the Eternal City even has a future.. . .

Craft and Vision, a poem by Carl Phillips
Though the casting of light can’t really be called—not at
least believably—in any way a property of shipwreck
once the wrecking’s done with, what harm’s left, now,
in saying so? As for those who would argue otherwise
let them. Always, if it’s wanted badly enough, there’s
somewhere a findable veil just waiting to be lifted or pulled. . .

How Have You Been, Sir?, essays by Krzysztof Kąkolewski,
translated by Krzysztof Rowiński
. . . YOU SAW AUSCHWITZ FROM THE OTHER SIDE
I did not choose Paraguay or Bolivia, those who escaped
and hid in the jungle, or those who were still serving their
sentences. I chose the ones who aren’t afraid of anything;
those who managed to escape punishment forever. . .

The Letter in the Suitcase, a story by Menekşe Toprak,
with an introduction and translated by Yasemin Yildiz
As I descend the narrow staircase, I suddenly sense the fear
of the people who once fled to these confined, half-dark
corridors amidst the deafening sound of sirens. But this
sensation lasts only a moment. The sixty-year-old
propaganda poster on the staircase wall, Shhh!—
The Enemy Is Among Us, irritates me, and my feelings
change sides. . .

No Overtime, an essay by J. Malcolm Garcia
I tell Rosa about a time when I was down on my luck as
a freelance journalist. I wasn’t getting any work, my bank
account all but depleted. Desperate, I took a job as a
grounds worker at a Chicago country club. . .

Still Life with Hemorrhage, a poem by Leila Chatti
A wine crate for a nightstand, and on it, a rose
gone bad in a cup. Its water

Marvelous Things Heard. On Finding Historical Radiance,
an essay by Catherine Chin
I have a persistent fear of being a strange person in a
normal world. I know this fear is not uncommon. The
world—and I along with it—hopes to be normal, someday.
Sometimes, though, it is better not to hope for this. . . .

Night of the Full Moon, a poem by Shen Haobo,
translated by Liang Yujing
An orphan
stands in the sky.

Premiere Nights, a story by Teresa Solana,
translated by Peter Bush
I detest Mozart. His music seriously gets on my nerves.
Naturally I don’t like Verdi, Rossini, Handel, Monteverdi,
Puccini or Bellini or Wagner. . . . In a nutshell, I can’t
stand opera. Even though I undoubtedly belong to the
select band of old-timers who have watched the most
performances at the Liceu. . . .