I’ve been tagged! Thank you to fellow Tupelonian Karen An-hwei Lee for inviting me to participate in this bloggy Next Big Thing thing, 10 interview questions about what’s doing in my writing life.

If you’ve not read Karen’s ingenious, sensual, and seriously playful collection Ardor, check it out! And here’s where her Next Big Thing blog post lives...

What is the title of your next book?

It’s a long overdue sequel to The Alphabet in the Park (Wesleyan, 1990), for which I drew from Prado’s first three books.

I’ve been working on this new translation, poem by astounding poem, for decades, visiting Prado in Brazil to confer when I can, putting the project aside in the tumble of life, and always, always being drawn back and back to the pleasure of inhabiting these poems.  Adélia’s is a poetry of great heart and wild leaping. As she says, “Who am I to organize the flight of the poem?” (Carlos Drummond de Andrade, the most influential Brazilian poet of the 20th Century, famously declared: “Adélia is lyrical, biblical, existential; she makes poetry as naturally as nature makes weather.”)

Ex-Voto is vintage Adélia, drawn from her subsequent three books of poems, O Pelicano (The Pelican) 1987, A Faca no Peito (Knife in the Chest) 1988, and Oráculos do Maio (Oracles of May) 1999.

Which actors would you choose to play the characters in a movie rendition?

Oh, my.  If the movie were in English, then I’d choose Charlotte Rampling, with her sculptural and deeply human face, to play Adélia.

In Portuguese, it would have to be Fernanda Montenegro, the grand dame of Brazilian film and theater, who played Prado in the one-woman show based on her work that had a spectacular run in Rio and then toured throughout Brazil.

What is the one-sentence synopsis of this book?

A fiercely religious woman—wildy alive, haunted by memory and plagued by doubt—negotiates with God, converses with an ant on the path, obsesses about her imaginary lover (Jesus?), fervently celebrates the resonance that rises out of the quotidian, and insists on not just the intermingling of mysticism and carnality, but their connectedness.

Add to that this tiny poem:

From the guts,
Heart.

Will your book be self-published or represented by an agency?

Ex-Voto will be published by Tupelo Press in Summer/Fall 2013.

Szymborska with sex?  Macari with religion? Hikmet loosened up and out of prison?
(All of whom I ADORE.)

Who or what inspired you to write this book?

I fell in love with a 7-line poem of Adélia’s in 1980 when I was living in Brazil (which I later translated and included in The Alphabet in the Park):

The chickens open their beaks in alarm
and stop, with that knack they have,
immobile—I was going to say immoral—
wattles and coxcombs stark red,
only the arteries quivering in their necks.
A woman startled by sex,
but delighted.

I knew in an instant that I’d found the poet I was looking for, and began work immediately on that first collection! Now, twenty-some years later, I’m thrilled to be serving up another generous helping of her amazing work. And I have no doubt that there will be more to come. It’s a lifelong passion and privilege to bring her poems to English. 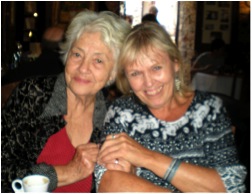 How long did it take you to write the first draft of your manuscript?

What else about your book might pique the reader's interest?

The brilliant Ilya Kaminsky is writing a foreword to the book—I can’t wait to read it!

Paying it forward: these my able & appealing tag-ees, who will post the week of Feb 11: