The 2014 Winner of the Anne Halley Poetry Prize is Geffrey Davis, for his poem, "What I Mean When I Say Farmhouse," published in Volume 54, Issue 3.

Geffrey Davis’s debut collection, Revising the Storm, was selected by Dorianne Laux for the 2013 A. Poulin, Jr. Poetry Prize, and will be published by BOA Editions in April 2014. Part of his work as a literary citizen involves promoting the poetry of others. To this end, he co-created and co-edits the online journal Toe Good Poetry. Davis holds degrees from Oregon State University and Penn State University. His awards include the Dogwood Prize in Poetry, the Wabash Prize for Poetry, the...

The 2013 Winner of the Anne Halley Poetry Prize is Ross Gay, for his poem "Ode to Sleeping in My Clothes," published in Volume 53, Issue 1.

A Cave Canem Fellow, Ross Gay is author of Against Which and Bringing the Shovel Down, the title poem of which enacts this poet’s excruciating extremes of terror and tenderness, and his profound understanding of what it means to be human. Gay’s poems have appeared in American Poetry Review and Ploughshares, among others, and Terrance Hayes dubbed him “some kind of brilliant latter-day troubadour.” An editor with the chapbook press Q Avenue, he teaches poetry at Indiana University... 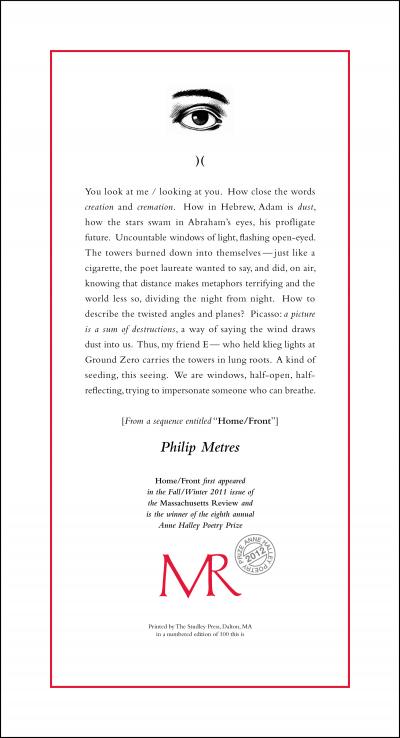 The 2012 Winner of the Anne Halley Poetry Prize is Philip Metres, for his poems "Home/Front" and "Air Aria," published in Volume 52, Issue 3/4.

Philip Metres grew up in the suburbs of Chicago. He graduated from Holy Cross College in 1992, and spent the following year in Russia on a Thomas J. Watson Fellowship, pursuing an independent project called "Contemporary Russian Poetry and Its Response to Historical Change." Metres went to Indiana University, where he received a Ph.D. in English and an M.F.A. in...

Joanne Dominique Dwyer was born and raised in New York State, but has lived in New Mexico for most of her adult life where she studied and practiced Acupuncture for a number of years before working in a family construction business while raising her two children. Dwyer began writing poetry and fiction through a community college class, which led for a brief time to participation and involvement in spoken word venues such as the Taos Poetry Circus and other collaborative ventures with visual artists and musicians. She...

Donald Morrill is the author of two volumes of poetry, At the Bottom of the Sky and With Your Back to Half the Day, as well as four books of nonfiction: The Untouched Minutes (winner of the River Teeth Nonfiction Prize), Sounding for Cool, A Stranger’s Neighborhood, and, most recently, Impetuous Sleeper. His work has appeared widely in journals and anthologies, and his honors include the Mid-List Press First Series Award, the River Teeth Literary Nonfiction Award, the Emerging Writers of Creative Nonfiction Award from Duquesne...