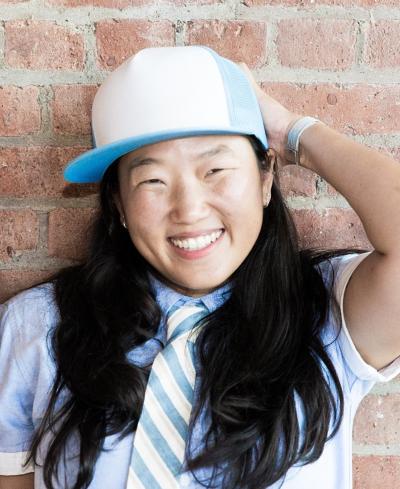 "A woman walks in alone after hours, all the machines quiet, though she can’t hate them today. The dry-cleaning tank is square and tall so she must stand on tip-toes to run her cracked hands along the top, muttering old Korean in neat strands of sound. A piece of skin flakes off when she rubs the metal of the shirt press." —from “13th Anniversary,” in Volume 59, Issue 4 (Winter 2018)

Tell us about one of the first pieces you wrote.
One of the first pieces I wrote was about my mother, in the same dry cleaners that is featured in “13th Anniversary”. I wanted a way to showcase how hard she worked, as a single mother, as a small business owner of a grueling industry, and as an immigrant dealing with racism and infantilization.

What writer(s) or works have influenced the way you write now?
Spoken-word poets, such as Patricia Smith and Saul Williams, heavily influenced my work, especially as a budding poet. Since pursuing my MFA, I have fallen in love with and been heavily influenced ny Lucille Clifton, Mary Oliver, Patrick Rosal, and Ocean Vuong.

What other professions have you worked in?
I have worked as a teacher in charter schools for the last five years in New York City, and now currently work as a Diversity Coordinator at the Ethical Culture Fieldston School. I have also organized summer camps, worked as a counselor in a residential treatment home, and worked for many years at my mother’s dry cleaners during middle and high school.

What did you want to be when you were young?
To be honest, I wanted to be a trash collector-—I thought it looked so fun to hang off the back of the truck while it was driving down the street.

What inspired you to write this piece?
I was inspired by a Korean tradition that happens on the first day of the New Year where children bow to their elders as a sign of respect and to wish them luck. My mother has always held on to this tradition, despite all the other ways we have become Americanized. Every year, without fail, she would go to the dry cleaners on January first, and perform the same ceremony, bowing to the machines. It always struck me, knowing what a source of hurt pride and indignation the dry cleaners represented every other day of the year. It felt heartbreaking to me, imagining my mother bowing to the machines and finding gratitude despite the often dehumanizing moments of working at a dry cleaners. It symbolized her resilience, and though it was heartbreaking to think of, it was also a reminder of all that my mother has been able to accomplish for her three daughters, despite surviving an abusive relationship, the trauma of immigration, and supporting a family on her own.

Is there a city or place, real or imagined, that influences your writing?
New York City often influences my writing as it has answered so many threads of longing in my life. I met my wife here, found my first queer community here, as well as a family of Asian American writers in Kundiman. I have never lived in a place where I can both find Korean foods I’ve only ever eaten in Korea and be my queer, Asian, masculine of center complex self without being questioned.

Is there any specific music that aids you through the writing or editing process?
The “Writing” playlists on Spotify are pretty awful, so I’ve stayed to my tried and true conscious hip hop mix.

Do you have any rituals or traditions that you do in order to write?
Writing often feels like stealing moments away from my work life, so the only ritual I have is to write as furiously as possible in the 30 minutes I can steal away. I do try to journal every morning.

If you could work in another art form what would it be?
I have always thought that it would be amazing to make films. I have always envied all the tools available to a film maker and to be able to create an atmosphere as well as the dialogue.

What are you working on currently?
I am currently working on poems that reflect the adult manifestations of growing up in a chaotic household, and the way that old patterns and triggers overlay themselves on intimate relationships. I want to look at how we could possibly unclench the grip of the past on a present that looks nothing like the violence of the past.

ARHM CHOI WILD is a Kundiman fellow and holds a MFA in Poetry from Sarah Lawrence College. She has been published in the anthology Daring to Repair by Wising Up Press and in the magazines Barrow Street, Split this Rock, Two Hawks Quarterly, Peal, Otoliths, and Scholars & Rogues. She has been working as a teacher in New York City for the last five years, and has performed and competed in poetry slams across the country, including at Brave New Voices, the Bowery Poetry Club, the Michigan Theater, and Asheville WordFest.