My grandfather Franjo Rejc lived his life in Bosnia. As a high-ranking railroad official, he moved from station to station until, several months before the outbreak of World War II, he arrived in Sarajevo to work at the main headquarters with the title of chief railway inspector. When I first wrote about my grandfather's working as a chief inspector, the critics interpreted it as a postmodern inscription for Danilo Kiš, whose novelistic and actual father had the same job. This, however, was not something I was thinking about the time. I did not compare the life of my grandfather with that of heroes in books.
—from "Kakania" by Miljenko Jergović, Translated by Russell Scott Valentino, Volume 61, Issue 2 (Summer 2020)

Tell us about one of the first pieces you translated.
One of the first pieces that suggested to me that I could do something that others found interesting was a poem by the Russian Ego-Futurist Igor Severianin. It was in the only translation workshop I ever took, with Michael Henry Heim at UCLA. The poem is called “Kvadrat Kvadratov,” which I translated as “The Square of Squares,” and is a sort of a puzzle with four stanzas each made up for four lines comprised of four syntactic units that alternate in such a way that it’s possible to read the poem in at least four different ways, left to right from the top, right to left from the bottom, then up one side and down the other. Severianin was quite a formal innovator and this is one of the original verse forms he invented. I remember having a ton of fun coming up with something I thought worked pretty well in English, and then one of my classmates, whose Russian was way better than mine, looked at it, apparently surprised and a bit envious, and asked how I did that.

What writer(s) or works have influenced the way you write now?
I’ve noticed that my writing often takes on the stylistic features of the writer whose work I happen to be translating at a given moment. This has suggested to me that I really shouldn’t “happen to be translating” anyone’s work if I’m not willing to let it influence my own. It’s quite a drag to realize you’re writing like someone whose style you find annoying.

What other professions have you worked in?
I was a professional musician from the age of about fourteen until about twenty-seven, when grad school far from my network of musical contacts made it hard to keep it up. Also, I was a drummer so couldn’t really carry around my kit when I traveled to Europe, let alone the USSR or Yugoslavia. I kept up with singing, mostly in chamber groups, and have continued to play off and on. I’ve also done some music composition and arranging, posting things to a YouTube channel under the name Ba Ren Chi (which is an almost Japanese version of my last name). Check it out!

What did you want to be when you were young?
I don’t remember having a clear sense of wanting to “be” anything, though I remember wanting to write and translate, probably beginning around the age of seventeen, which is a little strange, since I did not begin studying any foreign language until my first year of college.

What drew you to write a translation of this piece in particular?
First, let me thank you for that careful phrasing: “write a translation” is exactly correct, I believe. To answer your question, I wanted to translate a different piece by the same author, a short novel called Buick Riviera (which still has not been translated). I had pitched this to Jill Schoolman at Archipelago several years before she wrote to ask if I would do a sample of Kin. I hadn’t read Kin, which had just come out and was enormous and daunting—the one I had pitched was less than 200 pages long, while Kin clocked in at just over 1000—so I wrote back and asked if she had a copy she could send me. I was really busy at the time with other 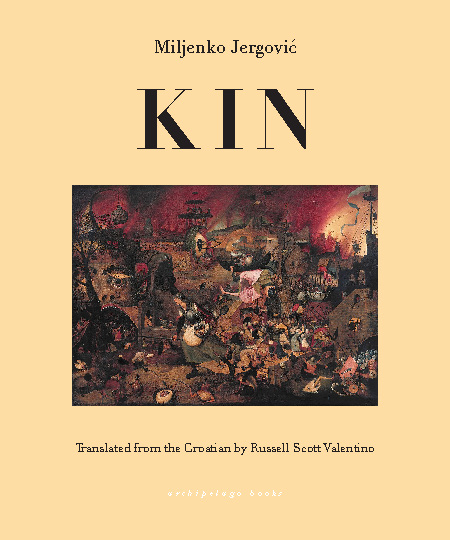 projects, and it was a struggle to squeeze in the time to get her 5000 words or so, but when I did, she wrote back very fast with exclamation marks in the subject line of her email and asked if I could do the whole thing. I took a deep breath, asked her how long she would give me (two years), and said yes.

Is there a city or place, real or imagined, that influences your writing?
The small farm where I grew up in California. Oranges, vineyards, a couple of acres of pasture, fruit trees and my mother’s large garden around the house, chickens, dogs, cats. It was work, but it was also the sort of place that fueled my imagination. I spent a lot of time alone. It doesn’t exist anymore, sold to a developer who built houses on it. But it lives in my memory.

Who typically gets the first read of your work?
It depends. I sometimes share non-translations I’m working on with colleagues. For translations, I tend to work on my own until it’s time to work with an editor. But I’ve also kept a blog for testing things out, dividing projects into categories. So there is a “Reflections on Kin” category at russellv.com that has about thirty short pieces on various translation issues I faced while translating the book. Random people from around the world read those and sent me suggestions. Once I got a note from someone whose email address I didn’t recognize offering the services of the author of the book I was translating in case they might be of any help. It was Miljenko Jergović, who had been reading my blog from his home in Croatia. The translator of course took the author up on his offer.

If you could work in another art form what would it be?
I feel really fortunate to be able to work in more than one art form as it is. Wishing for yet another would be greedy.

What are you working on currently?
I’m pulling together a number of the various writings on translation that I’ve published over the past decade and a half, under the preliminary title Good Enough for Jesus, and writing two research-based nonfiction books that I suppose might be thought of as at the confluence of cultural and environmental history, travel, and memoir. One is on Russia and the other is on the Adriatic (both sides of it). COVID has slowed the travel part down a bit, but I’m making progress. I’m also playing around—a technical term I learned from my father—with a translation or adaptation of Dostoevsky’s Notes from Underground. It has been translated so many times, including recently, that I can’t quite get motivated to do a new one. On the other hand, I find the text has been weirdly pushing me to work on it somehow. It feels like a dramatic piece at this point. We’ll see.

RUSSELL SCOTT VALENTINO is the author of two books, editor of three literary and scholarly collections, and translator of eight books of fiction and literary nonfiction from Italian, Russian, and Bosnian-Croatian-Serbian. His work has appeared in The New York Times, Modern Fiction Studies, Defunct, Del Sol Review, and elsewhere. He is the recipient of two Fulbright research awards, three National Endowment for the Arts translation grants, and a PEN/Heim award. He previously served as editor-in-chief at The Iowa Review and President of the American Literary Translators Association. He is currently professor of Slavic and East European Languages and Cultures at Indiana University and serves as senior editor at Autumn Hill Books. His translation of Miljenko Jergović’s monumental 2013 novel Kin, from which “Kakania” is excerpted, is forthcoming from Archipelago Books in 2021.