Despite approving nods from Gertrude Stein and Ezra Pound. Karl Sadakichi Hartmann (1867-1944) remains one of the most eccentric—some say, dilettantish—figures in American literature. In that crepuscular, liminal era between Victorianism and Modernism, Hartmann held court as the quintessential jack-of-all-trades: a poet, a playwright, an art critic, a pioneering photography critic, a newspaper reporter, a proto-beatnik/hippie (he was crowned King of the Bohemians in Greenwich Village exactly a century ago), silent-film extra (he appeared as the court magician in The Thief of Baghdad), and self-styled court jester to a Hollywood rat pack of the 1920s (John Barrymore described him as “a living freak. . . sired by Mephistopheles out of Madame Butterfly”).

With these credentials, it is hard for some critics to take Hartmann seriously as a writer. His two staunchest allies in the literary community, Gertrude Stein and Ezra Pound, were themselves eccentrics after a fashion, so perhaps their kudos sprang from “it takes one to know one” rather than from a close, critical reading of his works. Stein declared that “Sadakichi is singular, never plural,” and Pound memorialized him in the Pisan Cantos (LXXX) by saluting him as a friend while regretting the loss of Sadakichi’s early writings.

Identity politics also played a role in marginalizing Hartmann, especially as a poet. Within the Asian American community he was famously denied inclusion in Aiiieeeee!, the landmark1974 anthology of Asian American writers edited by Frank Chin, Jeffrey Paul Chan, Lawson Fusao Inada, and Shawn Wong. In that compilation, a product of a highly polemical era, the editors blisteringly faulted Hartmann for his “Orientalism”: “The tradition of Japanese American verse as being quaint and foreign in English, established by Yone Noguchi and Sadakichi Hartmann, momentarily influenced American writing with the quaintness of the Orient but said nothing about Asian America, because, in fact, these writers weren’t Asian Americans, but Americanized Asians. . .”

In Aiiieeeee! Chin et al advanced the cause of Miné Okubo as the first serious Asian American writer, largely because she had written first-hand about her experiences as an inmate of the Japanese internment camps during World War II. (Hartmann, despite the double whammy of being the son of a Japanese mother and a German father, escaped the fate of 120,000 Japanese Americans and spent most of the war years on his farm in rural California before dying in Florida in 1944, a luxury denied the internees.)

Given the above, is it possible to rescue Hartmann from eclipse or exclusion? Juliana Chang thought so when she foregrounded Hartmann’s (and Noguchi’s) poetry in her Quiet Fire: A Historical Anthology of Asian American Poetry, 1892-1970, published in 1996 by the Asian American Writers’ Workshop, a generation after the two had been blackballed—dare we say "yellowballed”?—by the Aiiieeeee!-ists.

More to the point of this review, Floyd Cheung thinks rescue is not only possible but desirable. His handsome volume Sadakichi Hartmann: Collected Poems, 1886-1944, just published by Little Island Press in the UK, is a most valuable addition to the limited scholarship about this idiosyncratic author. Cheung, professor of English Language & Literature and American Studies at Smith College, was also the founding chair of the Five College Asian/Pacific/American Studies Certificate Program. Born in Hong Kong and raised in Las Vegas, he seems naturally disposed to tackling the poetic corpus of a culture-straddling man like Sadakichi Hartmann. Cheung told this reviewer that he specializes in the literature of Americans of Asian descent who lived “before the term ‘Asian American’ was coined. The long-term survival of these early Asian American texts has been tenuous since no [academic] field and few libraries saw fit to preserve them.”

In all fairness to the more polemical critics of Hartmann’s work, Cheung acknowledges the perverse structures of racism and xenophobia that greeted Asian authors a century or more ago, and how native “American” attitudes conspired to portray Asian culture in one of two guises: either as a festering nest of intrigue and exoticism or as a quaint and placid sea of serenity and wisdom. As Cheung told this reviewer, “Hartmann himself was ambivalent about how others categorized him. After all he said, ‘I personally never think of myself as a German or Asiatic. Others do it for me.’ Yet he also knew that playing on his uncommon heritage could gain him access to some audiences and performance venues. He knew when to dress in a three piece suit and when to wear a kimono.”

Other scholars have attempted to unravel the conundrum that is Sadakichi, notably Jane Calhoun Weaver with her magisterial Sadakichi Hartmann: Critical Modernist, published by University of California Press in 1991. But no one before Cheung has attempted a comprehensive survey of Hartmann’s poetry written over half a century, from his juvenile gush “Oh, Miasmic swamps of Southern climes” that was obviously scribbled in the fevered penumbra of his idol Walt Whitman—the teenaged Hartmann pilgrimaged to Camden in 1884, soon after his arrival in the United States.

Over his long life, Hartmann published four poetry collections: Naked Ghosts (1903), Drifting Flowers of the Sea and Other Poems (1904), My Rubaiyat (1916), and Japanese Rhythms (1933).  He also authored a critical study titled The Japanese Conception of Poetry (1904), all of which fueled the pique directed against his authenticity as an Asian American writer. In the Little Island edition, Floyd Cheung does not attempt to take sides. He presents Hartmann’s work with the kind of dispassionate impartiality that can only shed more light and less heat on Hartmann’s unique vision. Cheung writes in his notes on the text: “This volume reprints all of his poetry books—albeit without gilt edges—as well as some poems that heretofore one could consult only among the Sadakichi Hartmann Papers at the Special Collections of the University of California, Riverside.” 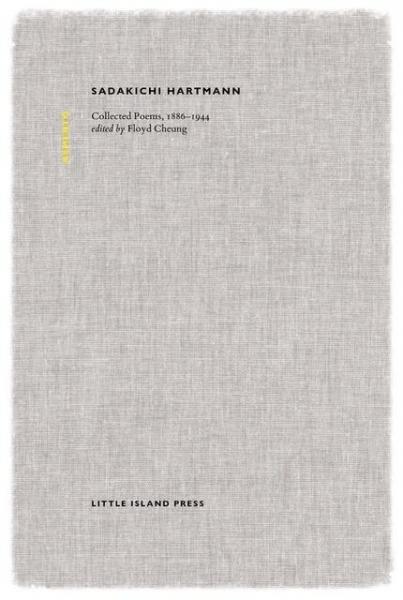 Fortunately for the readers of this impressive anthology, Cheung prefers to let Hartmann speak for himself. He includes not only texts of all of Hartmann’s poems, but also notes and prefaces that illuminate long-obscured chambers of his multifaceted nautilus. For example, in his preface to My Rubaiyat, which he subversively titles “Instead of a Preface,” Sadakichi Hartmann declares, “I will drop the mask and tell you the secret of my verses.” Though Hartmann may have been faulted by Frank Chin and his comrades for presenting “the Orient” as a passive receptacle for guise and secretive intrigue, Hartmann here asserts himself by declaring “I possess the arrogance of conviction.” Allying himself with the modernist currents swirling around him in the arts (his contemporaries Schönberg, Picasso, and Pound were, each in their own way, shattering old molds in music, painting, and literature) Hartmann adds: “Like the composers of the day I believe not in the old ideals but in new methods of expression.”

Despite his protestations of modernity, few of his poems can be considered “Modernist” either in terms of subject matter or syntax. Though “To the ‘Flat Iron’” (1904) suggests kinship with Hart Crane’s later “The Bridge”, any comparison pales once readers have dipped into the text of the poem, which appears among his Drifting Flowers of the Sea, a collection whose very title exudes a heady whiff of the fin-de-siècle Symbolism that was Hartmann’s forte. Written as a paean to the newly constructed Flatiron Building in New York, the poem is a far cry from other Modernist literary or visual works inspired by it (such as Albert Gleizes’s 1916 Cubistic gouache) as when it proclaims: “All else we see fails fast and disappear [sic], / Only your prow-like form looms gaunt, austere, / As in a sea of fog, now veiled, now clear.”

Perhaps it is his uncollected poem, “Valiant Flyer of the Air” (oddly dated as 1900, three years before Kitty Hawk) that shows Hartmann as his “Modernist” (proto-Vorticist?) best for the way it outfits language with the wings to soar above the mists of Symbolism and anticipate an idyllic future, as in this stanza: “Heigho Hippiedehip! / A bold salute / To the absolute / To God and all deities / That on this globe have trod / A challenge that soon / There will be superior journeys / To mars and moon!” Here, perhaps only his quotidian diction distinguishes him from true Modernists, who rely on convoluted syntax and sophisticated word-play to avoid any “quaint and foreign” patina.

The “heady whiff” of Symbolism referred to above seems to be Hartmann’s poetic signature. Nearly all of the verses he wrote over a 64-year span have a crepuscular, moody air about them, and he seems quite unconcerned about breaking old syntactic conventions, as in these lines from “The Loom Song”: “The light of the fireflies glows as they play / While the loom is being set to weave today.” Or here, in the first of the tankas from Japanese Rhythms: “Winter? Spring? Who knows! / White buds from the plumtree wing / And mingle with the snows. / No blue skies these flowers bring / Yet their fragrance augurs spring.”

Sadakichi Hartmann: Collected Poems, 1880-1944 is nonetheless an invaluable addition to Hartmann scholarship, as well as to the complex field of Asian American studies. It is the first volume to situate Hartmann squarely within the context of other poetic movements that were swirling about him—or, perhaps more accurately, that Hartmann was swirling around—during his long and convoluted career. As Floyd Cheung remarks, “Hartmann was a man of many and wide interests. In some areas he was a dilettante. In others he cultivated a life-long passion. He was not afraid of trying new things, like combining Japanese aesthetics with French Symbolism and putting on a concert with perfumes instead of musical instruments. . . What’s remarkable, though, was Hartmann’s syncretic and unfettered imagination and his willingness to take risks in creating art, even if it wasn’t always successful.”

It is futile to argue that Sadakichi Hartmann made any lasting contribution to the grand procession of Modernist verse. His strength lies in his verse dramas and criticism, and in his stance as an eccentric “village explainer” (with nods to Ezra Pound). But his Symbolist-infused poetry is charming and appealing to readers of a certain sensibility as well as to others who cherish and value a largely undervalued interlude in American literature of a century or more ago.

Edward Moran is a writer and literary historian based in New York City. He was English editor of the New York Nichibei, a bilingual Japanese-English newspaper published in New York. He served as literary consultant to the documentary film Hyam Plutzik: American Poet, directed by Christine Choy.