The Anthem in My Stomach At Soldier Field, Home of the Chicago Bears

If I had really good eyes, I might see the threads that join me to the crowd, or even to one old man, this fellow next to me, for example, his cheeks as flush as a Christmas card Santa, his eyes moist, his hand over his heart as he gazes at the flag and sings. He is, by all accounts, normal. He sings like a patriot, as do 40,000 or more others, all of them as normal as football on a Sunday afternoon. But the world, my world, is a soft red place, memory is red, as is the present. There is a hollow in my stomach; it would be red if a light shone. “The rockets’ red glare, the bombs bursting in air. . .” In my stomach, there is no room for the sentimental. There is no room for the last war or the next war or the next, but there is room for a tour. I’d like to take the crowd into my stomach, starting with this fellow next to me, if he can shut up for a while. “Over here,” I would say, “in this soft, red corner, is Robert Boeskool, dead at nineteen, dead for the past forty-eight years, though maybe talking this afternoon, maybe not, through me. Booby-trap death. Eyes blown out, throat cut at a slant. Sort of like Donald Bloomer—rocket-propelled grenade got him, throat wound also. KIA.” I know something the crowd doesn’t know: a body can be shredded like white paper in an office. I want to release the dead from my stomach, let them sing if they wish: “the rockets’ red glare, the bombs bursting in air. . .” Hey, it’s a free country, brave too. But truth doesn’t have to sing. Truth doesn’t have to say anything. In the slivers of silence you might hear it, between the words of the song. 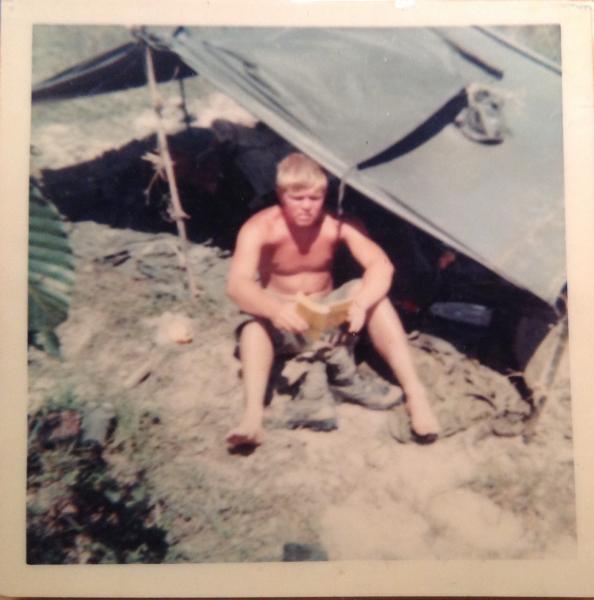 James Janko’s latest book, The Clubhouse Thief, won the AWP Award for the Novel. Our nation’s war in Southeast Asia shaped much of  who he has become as a person and a writer.