“A ru­mor states that if you wait there for the devil, you can trade your soul in exchange for otherworldly guitar chops or a booming dentistry career or a lifelong tropical vacation. Those down-and-out enough are prone to superstition. They’ll believe just about anything. They’ll even believe that your average Sorbis is Satan himself. . .” —from “Fifty Beasts to Break Your Heart”, Fall 2018 (Vol. 59, Issue 3)

Tell us about one of the first pieces you wrote.
If we’re talking genuine firsts, I do have a glittery Lisa Frank folder full of my earliest poems. They’re in my dad’s handwriting, because I didn’t know how to read or write yet, so would dictate to him and he would pen them. My magnum opus, if you will, which I composed at age four or five, is as follows:

The Ogre sits upon the castle tower.
He doesn’t stir, he doesn’t move
for not a sound he hears.
Whenever people come upon
his castle door again, he’ll eat them up
and eat them up, and have them all for dinner.
Now it’s bedtime. The Ogre is still waiting.

Not bad for a pre-literate child, if I do say so myself. Also, I’ve evidently been consistent in my themes since birth, because I’m still writing about monsters.

What writer(s) or works have influenced the way you write now?
I’ll tell you right here and now that my single greatest literary influence is the TV show Buffy the Vampire Slayer. I like to say that Buffy is the greatest story ever told. People often think I’m joking. I’m not joking! It’s a narrative that relies on the uncanny—on the tension of being a young woman, and attempting to navigate your duties and your friendships and the machinations of the heart—which truly is, by necessity, supernatural and surreal. It’s impossible to accurately portray the way being alive feels (at least to me) without an element of the paranormal. Buffy does this expertly. Another favorite storyteller who has mastered that liminal space between the commonly agreed upon “reality” and the supernatural reality of emotion is the incredible fiction writer Kelly Link. Also Angela Carter, Karen Russell, Aimee Bender, Helen Oyeyemi, Leonora Carrington. Mostly fantasists, surrealists, fabulists, who allow the emotional experiences of their characters to manifest as the literal laws of physics in the worlds they create.

What other professions have you worked in?
Growing up, I was a professional child clown. My dad, my younger brother, and I would co-write a clown show each summer and tour New England performing it at libraries. I devised my clown name when I was four: Chicken Bump. Now I think it sounds like some terrible disease. Better quarantine GennaRose, she has the Chicken Bumps!

I’ve also been a barista at six cafes, a grant writer, a bead merchant, a theater intern, a substitute librarian, a bookseller, and a busking poet-for-hire, writing poems to order on the street for strangers.

What inspired you to write this piece?
I became infatuated with the Medieval Latin bestiaries—in which monks would compile encyclopedias of all the known animals. These monks 1) had never actually seen many of these animals before, so the descriptions of them are largely bizarre or imagined and 2) they wrote the entries allegorically, using each creature to impart a moral lesson. The writings are fascinating and funny and strange, and I was so taken with the form that I decided to write a bestiary of my own, with entirely creatures of my own invention.

Is there a city or place, real or imagined, that influences your writing?
Growing up in the forests of Vermont, I was raised among artists and folklorists and the dramatic changes of the seasons. Vermont is dear to me, and certainly plays a very large role in my personal mythos. Much of my work is inspired by New England folklore—as well as Scottish lore, where I studied supernatural folklore ethnology at the University of Edinburgh.

Is there any specific music that aids you through the writing or editing process?
It’s actually impossible for me to write while listening to music. I get over stimulated and can’t focus, so I tend to work in silence. That said, there are absolutely musicians whose work inspires and invigorates me—Anais Mitchell is an exquisite storyteller who I’m in constant awe of. The legendary Paul Simon. My friends Lula Wiles, who have a new album coming out next year (I got a sneaky preview listen of it, and it’s killer). My comfort food of bands is The Decemberists, whose music has been a constant companion to me since I was a young teenager, when a boy I had a crush on made me a mix CD featuring a few of their songs.

Do you have any rituals or traditions that you do in order to write?
Honestly, no. I’m a pretty witchy person, but writing is one of the few acts for me that isn’t magic. It’s deliberate, focused work. The magic arrives the moment I’ve finished a piece, looking back at it and marveling that I’ve managed to manifest something into the universe that wasn’t there before. As for my process though, I write in bed. I’ve never understood why anyone would sit in a hard chair when they could sit in a soft bed.

Who typically gets the first read of your work?
My dad Michael is almost always my first reader. Has been since I was little. He’s a writer, too, so is a great editor and close reader—and is always enthusiastic to see what I’ve written.

If you could work in another art form what would it be?
I love theater. If I were to shift my gears in a different direction, I’d probably go back to doing theater again. I’d also love to act in film and television. Or if I could wake up one morning as a virtuosic singer, that would be great. Also: puppets are cool. All the performing arts have a big place in my heart. 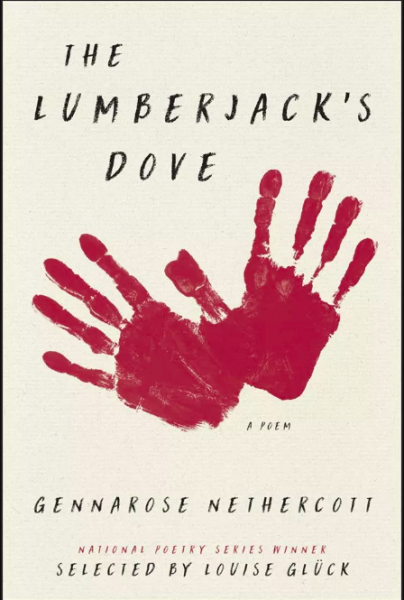 What are you working on currently?
My debut poetry book, The Lumberjack’s Dove (Ecco/HarperCollins), came out Tuesday, October 2. It was selected by Louise Gluck as a winner of the 2017 National Poetry Series, so this is a huge moment for me. Currently, I’m gearing up to go on a massive eight month long book tour across the entire continental US to promote it. The tour includes a 60+ foot scrolling shadow puppetry panorama made of hand cut paper animating my reading. It’s incredible, and was made by one of my favorite collaborators, Wooly Mar. I’ve converted the back of my little cherry red Honda Fit into a tiny camper, and will be driving the whole tour, so it’s going the be quite the adventure.

I’m also working on a few other secret projects that I’m not allowed to talk about yet, but are super exciting and strange. Suffice to say, there is spooky nonsense to come that I’m rather looking forward to.

GENNAROSE NETHERCOTT’S book The Lumberjack's Dove was selected by Louise Glück as a winner of the National Poetry Series for 2017. Her other recent projects include A Ghost of Water (with printmaker Susan Osgood) and the narrative song collection Modern Ballads. She has been awarded residencies at the Vermont Studio Center, Art Farm Nebraska, Shakespeare & Company bookstore, and elsewhere, and is the recipient of a 2018 Mass Cultural Council Artist Fellowship. She tours nationally and internationally composing poems-to-order for strangers on an antique typewriter, and is the founder of The Traveling Poetry Emporium, an itinerant team of poets-for-hire.