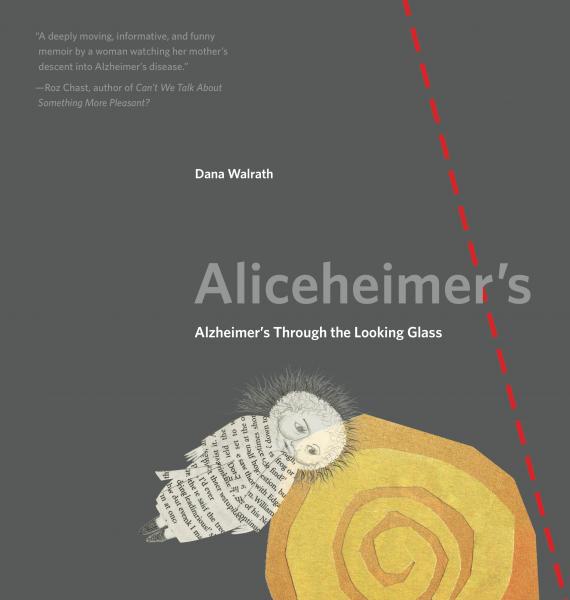 “I knew who I was this morning, but I’ve changed a few times since then.” —Alice in Wonderland

Alzheimer’s disease looms large in the American imagination. The stories and movies follow familiar plots: Parent (or spouse) begins to lose things, forgets names, perhaps leaves the house lived in for decades and gets lost. Child (or spouse) watches helplessly until the moment when a decision is made to move the afflicted into a family member’s home, an assisted living community, a nursing facility. We share the POV of the caretaker, the one left behind, as the object of our attention slowly disappears. And then we feel sad, or frightened, or simply grateful not to be in that situation . . . yet. Even stories ostensibly told from the perspective of the person with Alzheimer’s—2014’s Still Alice comes to mind—portray a kind of encroaching hell escapable only through suicide or oblivion.

For those of us who identify as having a disability, particularly a neurological one, such portrayals can raise some discomfiting questions. Do these stories represent the experience of Alzheimer’s, or do they reveal our fear of it? Is it possible to distinguish lived reality from empathy (a concept that writer Nicola Griffiths eviscerates in her recent LitHub article, “The Dos and Don’ts of Writing About the Disabled”)? And whom are we empathizing with, anyway? The caretaker? The (more than) five million Americans with Alzheimer’s? Or our own nightmare vision of the disease? What gets lost when we conflate our horror of losing language, memory, or mobility, with the reality of those going through such changes?

One problem, perhaps, is that people with Alzheimer’s rarely have the ability to express themselves, if only because words so often escape them. It’s a conundrum that Dana Walrath wrestles with directly in her thoughtful, exploratory, and deeply loving Aliceheimer’s: Alzheimer’s Through the Looking Glass. Walrath’s graphic memoir of her years living with her mother, Alice, as Alice descends down the rabbit hole of memory loss and physical incapacity, combines drawings and collages, inspired by Alice’s own words, with short essays from Walrath’s standpoint. The result is a book about living with Alzheimer’s that gives voice to both caretaker and, insofar as is possible, patient. In this dialogue, illustration helps Alice’s actual words subvert empathic inaccuracy, and challenge our fears.

It helps that Walrath is a medical anthropologist by training and trade. Her work at the University of Vermont College of Medicine compels students to, as she writes, “understand medical systems as cultural systems, to see the social and political determinants of sickness and health. . . . students . . .  witness their own responses to patient stories, firsthand and raw.“  Readers are invited to the do the same: Walrath observes, interviews, and interacts with her subject, dutifully recording her own thoughts and those being transmitted by her mother. Careful always to distinguish between Alice’s words and her own interpretation, Walrath manages to get close to transcribing her mother’s voice.

Walrath provides a map for the journey. In her introduction, she

encourage[s] you to read the book several ways. Page through it to feel the storyline as it exists in the drawings on their own; read it from cover to cover, feeling the long narrative carried in the text that was inspired by the images and written over several years; and finally, when your attention is short, as it is for anyone with memory challenges or simply pressed for time, leaf through the book to any page and take in a single vignette along with the image that set that story in motion.

This advice further enhances the reader’s sense of Alice as a subject, not simply the object of scrutiny. It engenders a more true empathy, leading us through sensual disorientation to narrative clarity, and ending with a synthesis that, while no doubt far from the actual experience of one living with Alzheimer’s, offers an impression of that world for a moment.

Walrath supplies us with a guidebook for our encounter with Alice as well—in this case, Lewis Carroll’s Alice in Wonderland, pages of which figure in the collages Walrath makes of Alice’s memories and impressions. It’s a smart choice: Carroll’s beloved book provides a familiar, humorous language of dislocation, confusion, and mental illness that frames both Alices as explorers rather than victims, navigating  their Wonderlands hand-in-hand with readers and trying to make sense of their surroundings.

The real Alice’s new world is one in which marvelous things can happen. Her deceased husband, Dave, appears up in the trees, as did Carroll’s Cheshire Cat; like the cat, Dave’s appearance is disconcerting but not terrifying:

Sometimes, when Alice knows she is seeing something that I can’t, like my father up a tree, she will say, “Do you remember that time when Dave climbed a tree and we were looking all over for him, and then when we were about to give up, he called out to us?” She’s a good storyteller, and like all of us, she uses story to make sense of the world.

Walrath, too, tries to make sense of this scene that she cannot see, reflecting on her parents’ stormy marriage, her father’s battle with cancer, and concluding that Alice’s vision is evidence of the love that binds her parents even after Dave’s death. Like the Cheshire Cat, Dave-in-the-tree is at first confusing and strange, but becomes a figure of reassurance for Alice and a comfort for her daughter. 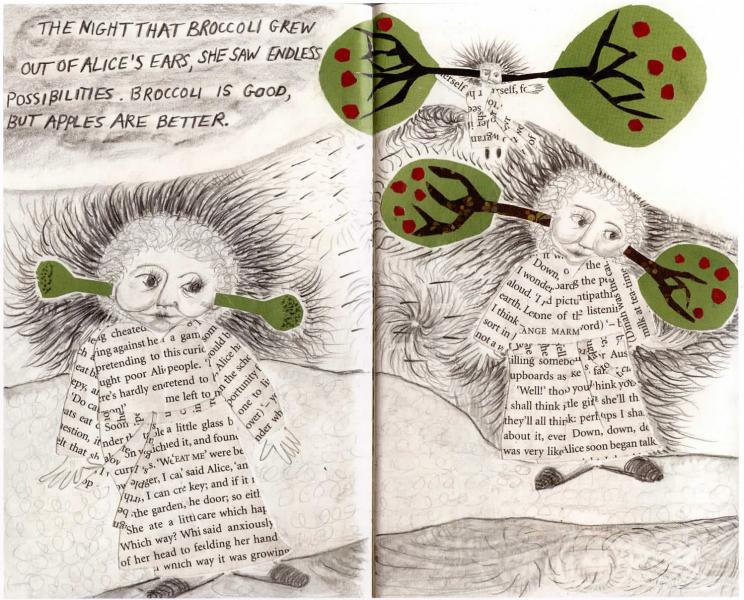 Carroll’s novel is rarely explicitly mentioned, but it provides a metaphorical through-line for readers whose only understanding of Alzheimer’s is one of fear and fog. Walrath sometimes uses her own anthropological analysis to frame a situation, but more often she transcribes Alice’s voice without mediation. She writes, “I was fresh the morning after the night that broccoli grew from [Alice’s] ears. When she told me that she would rather have apple trees with new fruits appearing every time she reached out to pick one, I knew she was onto something.” If Alice’s world is Wonderland, then we should expect the inexplicable and welcome absurdity without striving for sense.

Aliceheimer’s is published by the Pennsylvania State University Press, part of its Graphic Medicine imprint. The books in this series “attest to a growing awareness of the value of comics as an important resource for communicating about a range of issues broadly termed ‘medical.’ . . .  [G]raphic narrative enlightens complicated or difficult experiences.” In a culture with such paltry language for the experience of disability and illness (in which we are either “well” or “sick,” in which diagnosis transforms people into patients, in which suicide is represented as a logical response to disability), graphic representations of lived experiences are crucial, and perhaps morally imperative. Images and pictures, long the refuge of the illiterate and the nonverbal, allow Walrath to make visible some part of Alice’s experience, revealing the human reality behind our nightmares.

Emily Wojcik is the managing editor of the Massachusetts Review.